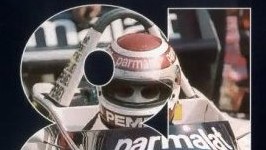 This is as early as the official FOCA reviews stretch back, and it shows. The 1981 season review video is disjointed and narrated rather poorly by the nevertheless very well-informed F1 pundit Simon Taylor.

It’s a shame because aside from the politicking and the sad events of Zolder (where one mechanic was killed and another shockingly run over and injured during a chaotic race start) there was a lot of entertaining action in 1981.

Famously, the season began with Carlos Reutemann infuriating his Williams team-mate Alan Jones by refusing to defer to team orders in the Brazilian Grand Prix.

Reutemann and Nelson Piquet subsequently raced for the championship before Reutemann crumbled at the final round and Piquet took the points he needed, despite vomiting with exhaustion in his helmet.

There are two fabulous wins from Gilles Villeneuve – indeed, his final two.

But it’s all rather spoiled by Taylor’s stilted commentary and the odd way in which the film is compiled, with a large amount of material presented in a haphazard fashion at the beginning of the feature, before settling into a chronological review of the year after about half an hour. The commentary is more observation than information.