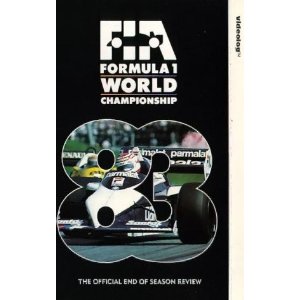 Though controversial the 1983 season was quite entertaining and, with ground effects banned, one that did not see any drivers suffer serious injury – unlike the turbulent and tragic 1982 season.

What a shame, then, that the quality of the footage is not very good, and the commentary is simply appalling.

Apparently trying to be funny, the commentators (Brian Kriesky and Barbara Rosenblat) act as a married couple with the ‘wife’ barging in with hopelessly wooden lines about how cute the drivers are.

No, it’s not even funny in an ironic way, it’s just plain painful. That and the dodgy video quality and audio reproduction make this an unpleasant viewing experience.

There are at least some good races of note and another championship decided at the final round.

After Brabham’s flirtation with refuelling in 1982 it was essentially mandatory in 1983, and adds as little to the entertainment to the action as it does these days.

If you’re assembling a complete collection of these videos, this is one that can wait until last, or until you spot it for 50p in a charity shop somewhere.

Best bit: In an uncharacteristic blunder, Alain Prost takes himself and title rival Piquet out of the Dutch Grand Prix.