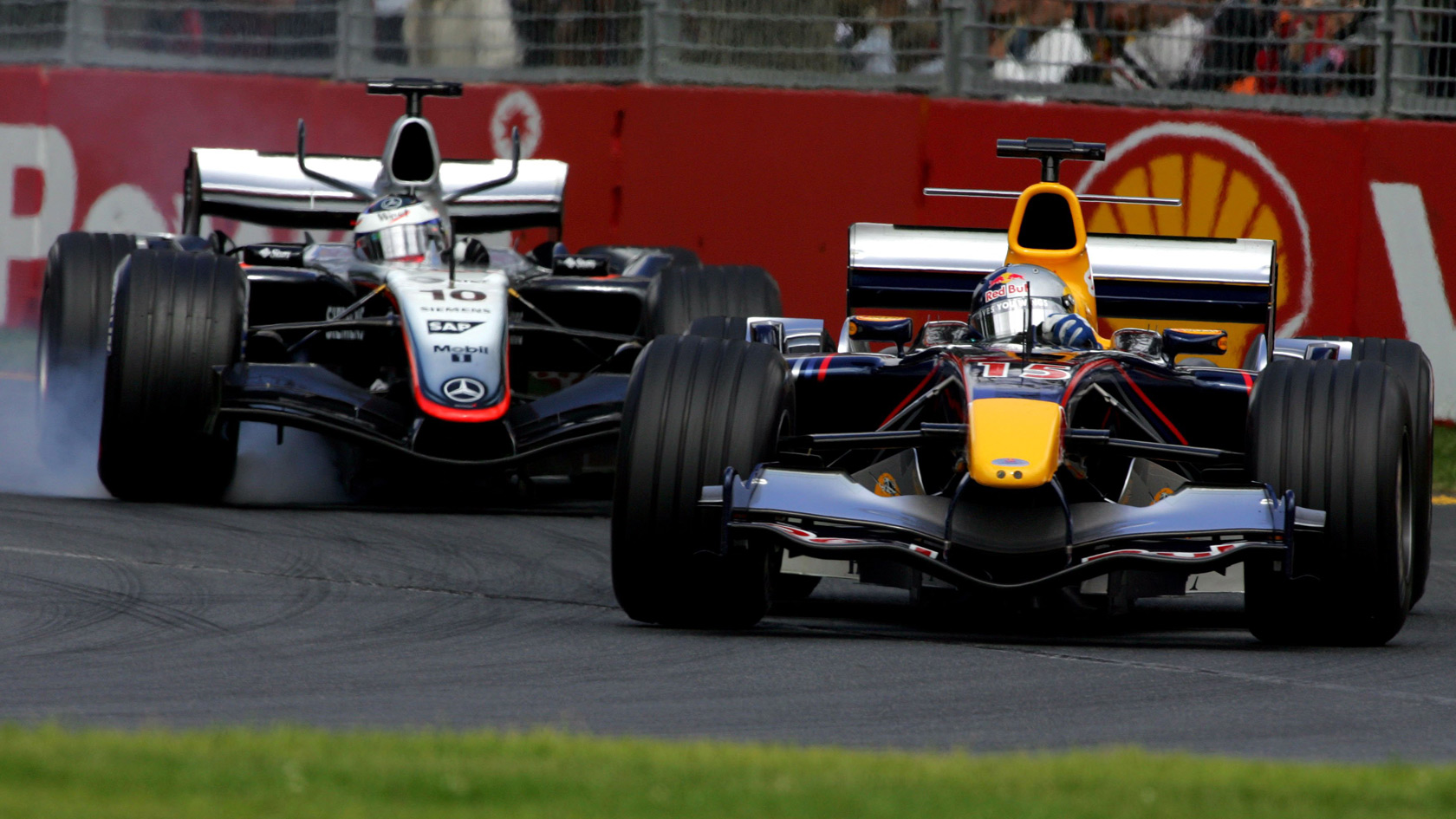 L1 – Raikkonen stalls so the race is quickly restarted. Fisichella leads away from Trulli.

KC What was that about? They all sat there, looking at the car and doing nothing. This is a strange race – are they gonna start pushing soon?

Meanwhile, Coulthard has tagged the back of Christijan Albers’ Minardi while trying to lap him. We switch to an in-car view from Michael Schumacher’s car as Felipe Massa swings wildly offf the track at Stewart corner.

KC What the hell happened to Massa? Did Schuey press the ‘destroy backmarker’ button? Kimi needs to zap him pronto.

RB Did Schuey lose out to Kimi after the pit stop? Allen hasn’t said.

KC Yeah he did well spotted I was trying to figure that out. He only short fuelled though. DC going v well. JPM needs to leap RB though.

L34 – Kimi Raikkonen’s McLaren is losing its right hand side barge board.

KC Kimi reminds you of Schu in ’03! But why the hell is MS so slow he should be caning it by noe. Also Ralf is nowhere. Toyota going backwards as they always seem to.

RB Do u think Ferrari will get new car for Malaysia?

KC V much doubt it, it was only broken in this week. Also could be an issue with the two race engine, but he has changed it hasn’t he so maybe not…Round 3 or 4 I bet.

L42 – After his second stop, Schumacher emerges from the pits ahead of Nick Heidfeld. When Heidfeld darts down the inside at turn three Schumacher squeezes him onto the grass and the pair collide.

KC MS Should have seen that coming. Cheeky sod is off again though! And Allen is apologising already!

L54 – Coulthard’s pursuit of Alonso is hampered by Villeneuve, who is not given a blue-flag signal to allow Coulthard past.

RB Coulthard’s Red Bull has given him wings!

KC Yeah am impressed – compare that to Trulli! Rubens keeping his nose clean too, just like he did last year. JV was well out of order there. Sick of these damn ads!

L57 – Fisichella takes the win from Barrichello and Alonso. Coulthard is fourth ahead of Webber and Montoya, the highest McLaren, sixth. Both BARs retire to the pits to allow them an engine change.

KC Williams could have had Fisi at a snip a few years ago. He seriously deserves that win. Fair play to Rubens to, there’s nothing wrong with the F2004-M is there?

KC Changed their engines too. Not looking good for them. Wonder what happened to JPM? Right I’m off to bed – night!

RB I’m going to have breakfast…