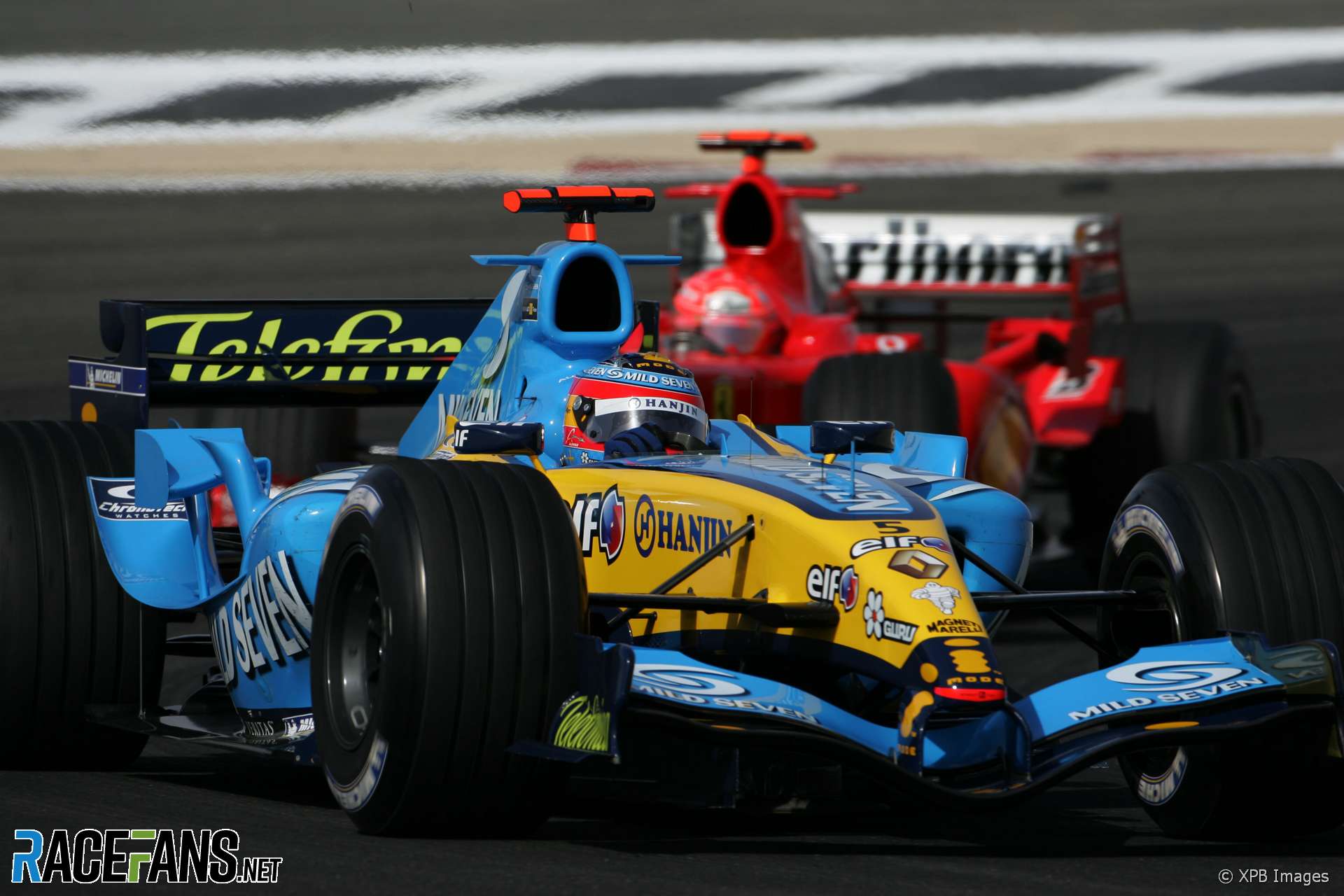 Fernando Alonso swept all before him to take a second consecutive win – including the Ferrari F2005s which failed even to score points, let alone match the first-race-winning pedigree of the their predecessors.

To begin with it looked like we were set for a classic encounter and a dogged battle between the flying Alonso and the recovering Michael Schumacher.

The seven-times champion put his brand new car second on the grid alongside Alonso’s Renault. Ferrari had rushed to introduce the F2005 five weeks ahead of schedule. In Schumacher’s hands it had been quick and the feared unreliability had so far belonged to his team mate.

But Schumacher’s threat for victory, absent so far in 2005, lasted a mere 12 laps when we witnessed the end of a record of a different kind – the longest run of driver participations unbroken by mechanical failure. Since retiring from the 2001 German Grand Prix Schumacher has run 58 races without being stopped by technical gremlins. But, plunging into the awkward turns nine and ten his Ferrari refused to down-shift and pitched him onto the vast run-off area.

With Schumacher gone, Alonso won with comparative ease in a race run in punishingly high temperatures. Jarno Trulli gave chase in vain and the other Renault of Giancarlo Fisichella was claimed by engine failure having started only tenth. He had been held back by an early running slot in the first qualifying session, and apparently fuelled more heavily in the second. He will have it all to do again at Imola, where he will hope to finally add more points to the ten he won in Australia.

Trulli shone for Toyota and may now be considered a championship contender. He started third, having been second in the first qualifying and fifth in the next. But he proved not to be carrying more than an extra lap of fuel over Alonso, and so there is still a significant performance gap between the two cars. Toyota have a substantial new rear package planned for Imola, and with the facilities at their disposal they can be expected to move closer to the front as the season progresses. And, speaking of significant performance gaps, Ralf Schumacher was again out-qualified and out-raced by his lesser-paid team mate.

The third podium slot was taken by a weary-looking Kimi Raikkonen. McLaren again underlined their strong race pace but remain seriously hampered by their one-lap performance. Raikkonen struggled through the field, taking too long to overcome Nick Heidfeld’s Williams after an error by the German allowed Ralf Schumacher through.

Juan Pablo Montoya was absent due to injury, and his replacement driver Pedro de la Rosa delivered the most remarkable performance of the day. Able to lap extremely quickly when free of traffic he proved his lack of familiarity with wheel-to-wheel racing after three years of testing, by twice running too deep into turn one while trying to make up places. He squeezed past Mark Webber in the dying laps, but the time taken cost him a chance to pass Ralf Schumacher for fourth. You can’t help but think that regular man Montoya would have been more clinical with his passing moves. Webber was floundering with poor late-race balance, but nonetheless defended with a thoroughness and total fairness that some of his rivals could learn from.

Elsewhere it was another dismal day for Sauber and BAR. Although Massa salvaged some cheer for Sauber with seventh, they were emphatically the slowest Michelin runners all weekend. Jacques Villeneuve continued to struggle, but would have capitalised on Barrichello’s misfortune to seize eighth had he not been bundled out of the race by Coulthard. Neither BAR made the finish – Sato was already suffering transmission problems when he ran out of brakes, and Jenson retired with clutch failure. Given that engine breakages accounted for both cars in the last race, it’s clear that the problems with the BAR are not just confined to its lack of speed. Button, seething in Malaysia, was no less aggrieved here, the same place where he scored his second podium twelve months ago.

Spare a thought, too, for Rubens Barrichello, who suffered a cruel weekend imaginable. Gearbox problems kept him from completing more than five laps on Friday, and he only did a qualifying lap on Saturday. The gearbox flown out to replace the original one didn’t work, and so the old gearbox was fitted again, with a new engine, sending him to the back of the race. Few people expected him to last long but he put in a dogged performance, slowly moving up through the field until he began suffering traction problems. He gradually slipped back out of the points until Coulthard robbed him of the final one on the last lap.

Red Bull’s early season pace appeared to have deserted them, with Coulthard struggling in qualifying and Klien failing to start. The Jordans and Minardis again only contributed as backmarkers – Narain Karthikeyan retired early, and Christijan Albers ran into Coulthard on lap one and had to stop for a new wing.

There is now a three-weeks gap until the San Marino Grand Prix but Ferrari have to find reliability to match the F2005’s apparent speed. Exactly how quick the new car is remains to be seen, as Schumacher was 0.389s down on Alonso’s pole lap (and Alonso made a small error in sector three) in the low-fuel first qualifying session, and we never saw how much fuel he had on board during his first stint. With a 24-point gap to Alonso in the championship, Schumacher must make a response soon.

One comment on “Alonso cruises to victory as Schumacher drops out”