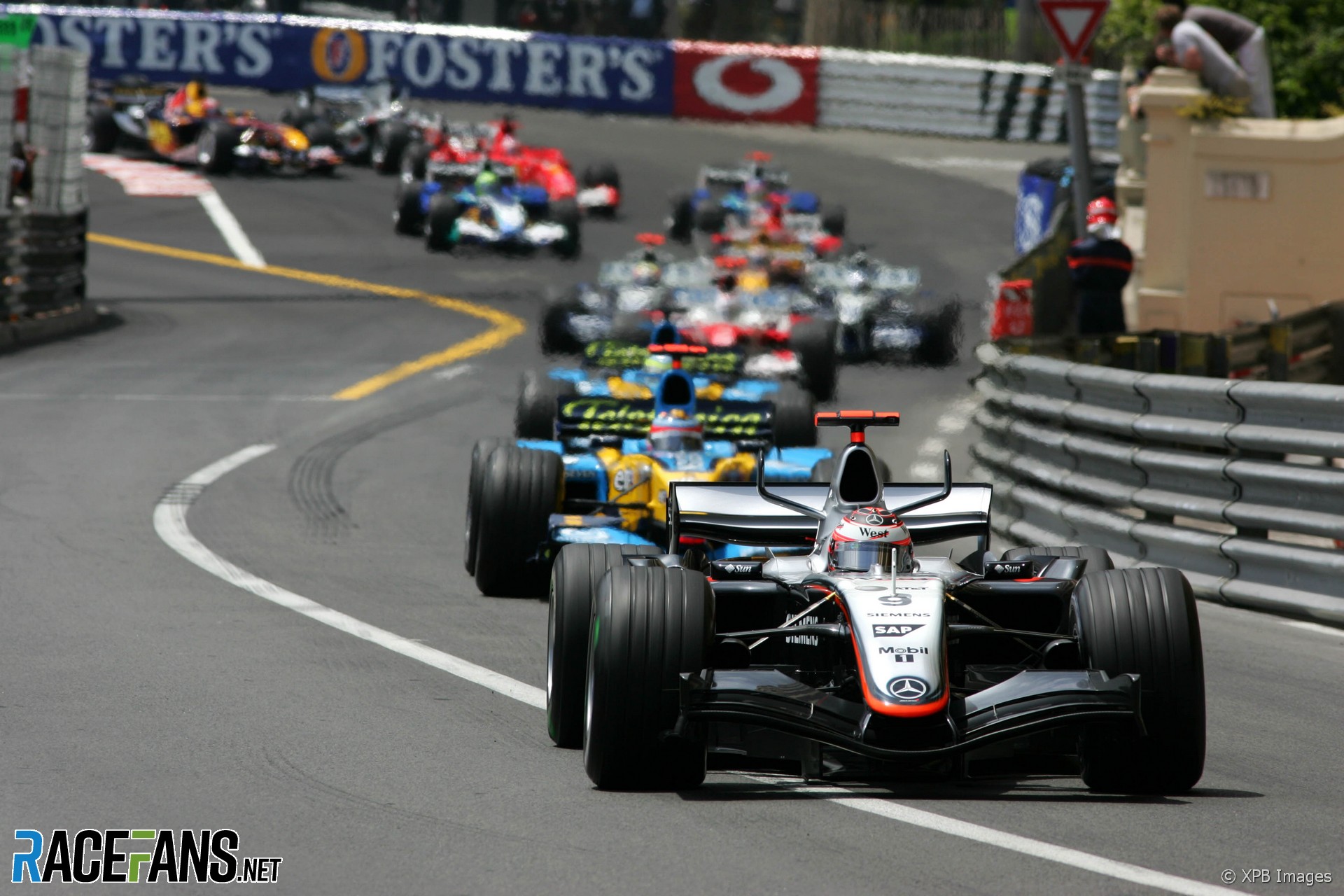 Kimi Raikkonen continued his assault on Fernando Alonso’s championship lead by winning the prestigious Monaco Grand Prix. He led from start to finish and was never headed when he missed the opportunity to take a pit stop during a safety car period.

Fernando Alonso may well have run his Renault a little lighter than usual in an effort to steal the vital Monaco pole position from Kimi Raikkonen on Sunday morning. But he failed to take pole and did not run to his intended pit stop as the race was interrupted on lap 24 by a safety car period.

Up until then it had been the usual processional stuff for the Monaco Grand Prix. Raikkonen led Alonso from pole, Mark Webber suffered another poor start in the Williams and slipped behind Giancarlo Fisichella and Jarno Trulli. Michael Schumacher failed to get ahead of David Coulthard, and Juan Pablo Montoya made a scorching start from 16th to pass Vitantonio Liuzzi, Tiago Monteiro, Christijan Albers and Patrick Friesacher.

Montoya could have started from a far better position had he not been found guilty of causing an avoidable accident during Saturday practice. Baulked by Ralf Schumacher at the start of a lap, he immediately slowed down and the reduced pace caused Jacques Villeneuve to run into Coulthard and the younger Schumacher.Montoya was accused of brake-testing, which he denied. Ralf, too, would start from the back after crashing during the first qualifying session.

They were still running in the same order as at the end of lap one when Christijan Albers spun his Minardi at Mirabeau. Coulthard slowed to drive around the car but Michael Schumacher, apparently thinking that Coulthard was running wide, dived after the Red Bull and thumped the back of the car, tearing off his front wing and damaging Coulthard’s gearbox. “It’s been a bad weekend for being rear-ended,” lamented Coulthard afterwards.

The safety car was deployed as the marshals hurriedly disentangled the traffic jam and sent everyone on their way. Many teams reacted, intending to save time by refuelling while the race pace was reduced. Raikkonen’s team missed their opportunity as he was already passing the pit entrance as the safety car was called. Renault refuelled both cars which dropped Fisichella from third to eighth.

As the race resumed, Raikkonen led from the lapped Schumacher and Friesacher, then second placed Trulli, Alonso third and Webber fourth. Montoya was now tenth behind Barrichello, but was not able to repeat his 2004 pass on the Brazilian at the rolling restart.

Raikkonen immediately set about rebuilding the lead he had generated before the safety car so he could make his pit stop without losing position to Alonso. The McLaren team surmised, accurately, that the Renaults were now fuelled to the end of the race.

On full tanks, the Renault drivers found they could not preserve their Michelin tyres, even though Alonso was running the harder ‘prime’ tyre (Raikkonen’s MP4-20 was shod with the softer ‘option’ compound).

To begin with, Raikkonen was aided by Friesacher’s Minardi, which delayed the pursuing pack for vital seconds. Raikkonen finally made his stop on lap 42, resumed in the lead, and was never troubled again on his run to the flag. Friesacher crashed out on lap 31 at the chicane, ending Minardi’s hopes of beating Jordan, having out-qualified them with both cars.

Barrichello and Montoya pitted together on lap 46 and the McLaren driver seized the advantage as Barrichello stalled, then left the pits without his speed limiter on and was called back in for a penalty.

With most of the leaders except for the Williams drivers having made their final stops, Raikkonen led from Alonso, who was hounded by Webber and Nick Heidfeld, with Felipe Massa fifth from Fisichella, Trulli and Montoya.

Michael Schumacher had a double lucky break on lap 58 when he emerged from the pits. Close-up replays suggested that he had crossed the yellow ‘safety line’ on the pit exit and would be punished, but no reprimand was forthcoming. He emerged behind Liuzzi and hounded the Sauber driver who was struggling with rear tyre wear. Liuzzi lost control and hit the barrier on lap 61, limping in with a punctured tyre and damaged rear bodywork.

Liuzzi was not the only driver struggling with rear tyre wear. Neither Renault driver could preserve their Michelins while running heavy with fuel. Alonso, who had a major moment at la Piscine on lap 54, briefly escaped the Williams drivers when they pitted for new tyres – Heidfeld first, which put him ahead of Webber. But the Williams duo were back on him with a vengeance in just a few laps.

Fisichella, too, was floundering with worn rear rubber and was holding up a train of cars from fifth to twelfth comprising himself, Trulli, Montoya, Massa, Villeneuve, Ralf Schumacher, Barrichello and Michael Schumacher. Tempers began to boil over and culminated in Villeneuve making a desperately ill-judged move on his own team mate at Sainte Devote. Villeneuve harpooned the tyre barriers and Massa was forced into a detour down an escape road which took both out of the running for points. “Depressing,” was how team boss Peter Sauber described the collision.

Trulli made his move on Fisichella on lap 65 at the Grand Hotel hairpin. He made it through, but clattered the high kerbs on his way. Montoya made an opportunistic dive down the inside of Fisichella after Trulli and also got through, which opened the floodgates. Ralf Schumacher and both the Ferraris were past Fisichella and in the blink of an eye the Italian was out of the points.

But Trulli had not gotten away with his daring move. He slid wildly wide at the chicane and Montoya pounced immediately, squeezing through a narrowing gap between the Toyota and the barrier on the exit of the chicane. Trulli surrendered his position as he came in the pits to have his car checked, although nothing significant was found.

The battle for second now moved into its end game. Heidfeld had made a few minor feints at Alonso but on lap 71 astounded the Spaniard with a perfect overtaking move at the chicane as Alonso was briefly distracted by traffic. It seemed like a carbon copy of Nigel Mansell’s pass on Alain Prost in 1991. Heidfeld kept clear of the exit kerbs and disappeared off to claim second, his best ever Grand Prix finish.

Webber, perhaps mindful of his earlier comments that his team mate “doesn’t race people, he just sits there,” now tried to replicate the move. He hurled his Williams down the inside at the chicane on lap 72, but thumped the exit kerbs. Alonso, unable to turn into the corner, cut it completely and kept his place. Onlookers wondered if Webber hadn’t done enough to get around the chicane and whether Alonso should be ordered to yield.

It became academic the next time around as Webber tried again and this time got through. Neither he nor Alonso really made the corner, and the unclear regulations on whether a driver can pass another without being on the circuit do not seem to have served the sport well in this event.

The top three were settled but Montoya was catching Alonso at a rate of three seconds a lap. Though he caught the Renault with two laps left he failed to make it by in time. Michael Schumacher made it past Barrichello at the chicane to Barrichello’s displeasure, though some have already suggested that this was mere smokescreen for a Ferrari-orchestrated exchange of positions. Michael pulled sharply alongside Ralf at the line, but was denied by less than a tenth of a second.

None of which troubled Raikkonen, and within moments he was out of the car, diamond-studded helmet gleaming, clipping on a watch before he went to the podium (as McLaren’s promotional protocol dictates). Five points closer to Alonso. Eight points further from Schumacher. And what will surely be a summer of McLaren dominance ahead of him.