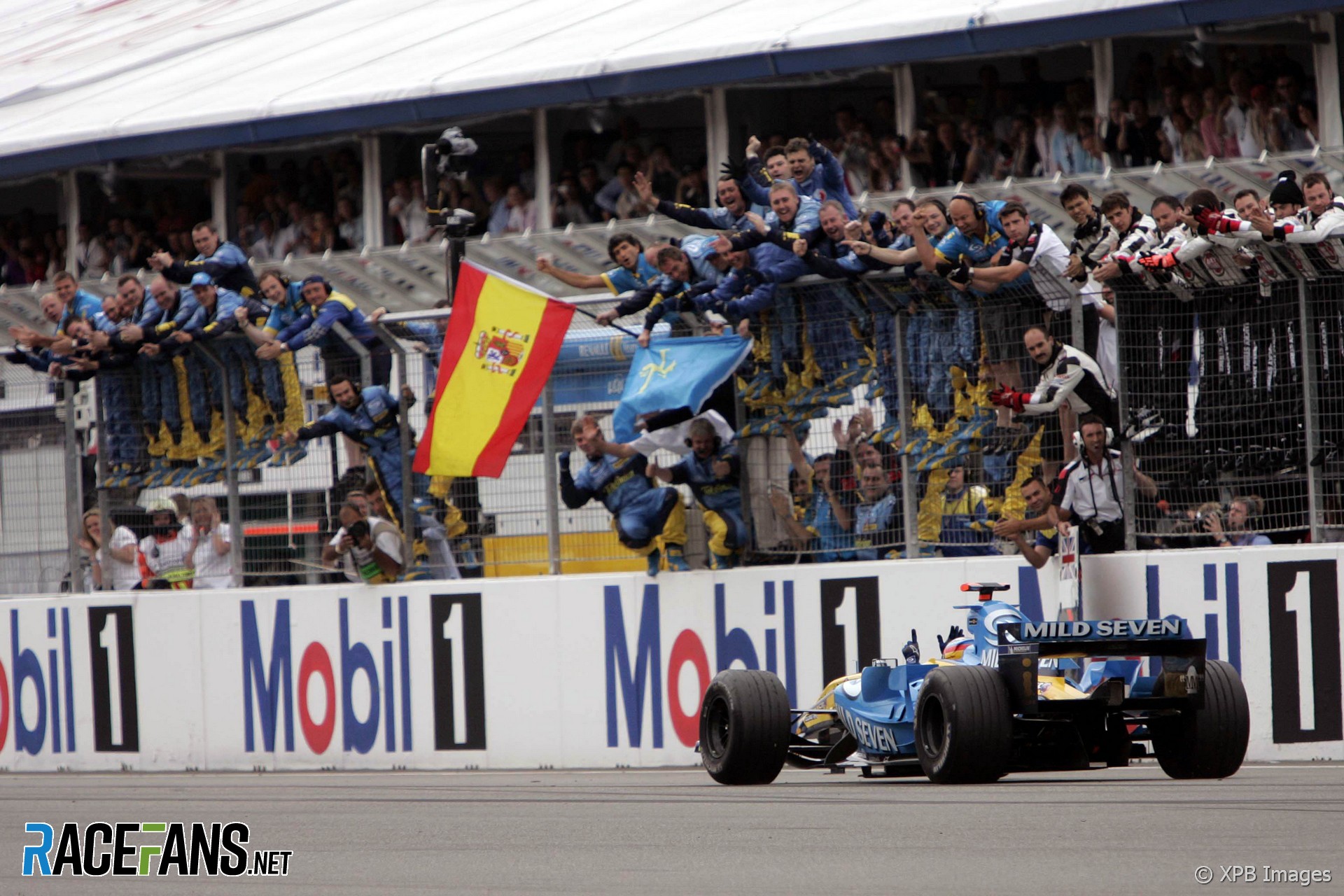 Kimi Raikkonen’s third successive car failure robbed him of yet another potential victory. That and a qualifying error by team mate Juan Pablo Montoya has given Fernando Alonso an almost insurmountable advantage in the title chase.

The German Grand Prix was not the overtaking-fest the media hype promised it would be beforehand. What action there was was confined to the predictable first-lap frenzy and later when Michael Schumacher’s massive gamble on soft Bridgestone tyres came apart at the seams.

Montoya’s meteoric ascendance from dead last to second was achieved through a scintillating start and a couple of smart passes (on Ralf Schumacher and Christian Klien) in the early laps, but thereafter was all down to smart strategy, good pit work, and the kind of reliability team mate Raikkonen could really do with.

Raikkonen was dominant in practice, dominant in qualifying (taking pole position 0.6s faster than Alonso with three laps’ worth of extra fuel) and dominant in the race until lap 36 when hydraulic failure first slowed, then paralysed his MP4-20. His German jinx had struck again – not only has he never finished the German Grand Prix, but he retired while leading the European Grands Prix at the Nurburgring in 2003 and earlier this year.

Alonso won as he pleased – never troubled from behind either by Montoya, who arrived in second place on lap 47, but half a minute behind the Spaniard after his final pit stop, or by Button or Michael Schumacher.

Button had started second but lost out to Alonso’s superior traction from the start line and Schumacher’s bold lunge from the tarmac apron on the outside of turn one on the first lap. In retrospect, this would prove critical in later laps as Schumacher slowed and held Button up enough for Montoya to catch and leap the pair of them at the second round of stops.

It was a generally frantic first lap at the wide Hockenheimring with its short, sharp bends and asphalt run-offs that positively encourage running wide, rather than preventing it. Rubens Barrichello, from a lowly 15th on the grid, bundled Jacques Villeneuve off the circuit, and Takuma Sato collided with Giancarlo Fisichella, requiring a new front wing for his own car and unsettling the handling of his Renault, which slipped to eighth to fourth on lap one. Jarno Trulli and Mark Webber also suffered: the latter’s car requiring extensive repair work.

A recovering Villeneuve tangled first with Robert Doornbos (replacing the cash-strapped Patrick Friesacher at Minardi), then was caught out by Tiago Monteiro at the hairpin as the Portuguese driver switched lines under braking, causing an avoidable accident. The stewards announced they would ‘investigate’ it.

The pit stops began as early as lap 16 with Heidfeld pitting in, and they allowed the late-stopping Montoya to jump Fisichella, Felipe Massa and David Coulthard. Montoya, the heaviest-fuelled runner, surely was indeed on for a win here if he had qualified second to Raikkonen. Ralf Schumacher also got out of the pits ahead of Fisichella, but promptly out-braked himself at turn two and lost the position.

Eight laps after Montoya’s stop Raikkonen was out and Alonso led Michael Schumacher, who was just one second clear of Button, with Montoya slowly catching the pair of them with a heavy fuel load. Schumacher was running the softer Bridgestone compound and they were beginning to show significant signs of wear, just as they had in practice.

Button pressed Schumacher hard but again the extent to which a chasing driver is compromised by current aerodynamics was painfully clear. Finally, on lap 45, he squeezed past at the hairpin with only two laps to go until his next pit stop. It was enough, but Montoya’s late final stop on lap 56 put Button back in third and dropped Schumacher to fourth. This despite Montoya being badly baulked by a battling Trulli and Heidfeld before his in-lap.

For all that Schumacher was struggling his team mate Barrichello was having an even more torrid race. On lap 52 Klien passed him for the second time. A fter a series of half-hearted attempts Fisichella finally made it past Schumacher on lap 66, with Ralf Schumacher and Coulthard in line astern behind them.

As much position change as there had been it still felt like a flat, unedifying race. Much of what little overtaking there was was simply caused by the excessive tyre wear suffered by Schumacher. It didn’t help that the broadcasters missed so much of the action either.

But they did remember to tune in to Alonso’s cockpit camera on the slowing down lap to catch the shot of those now-famous fingers. Six this time, for his sixth 2005 victory. Don’t bet against him running out of fingers by the end of the year if McLaren keep throwing races away like this.