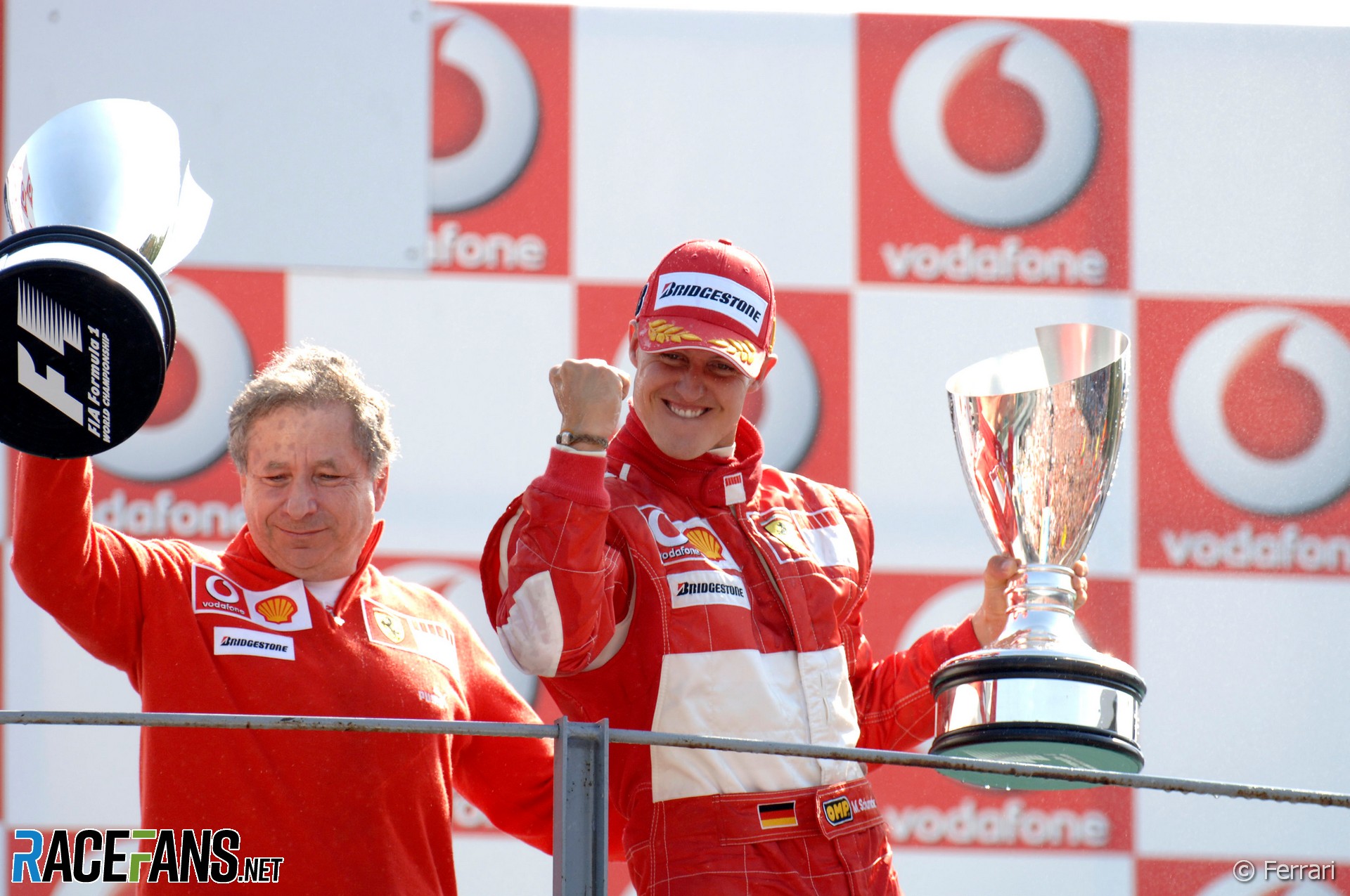 Michael Schumacher got the dream result he wanted before announcing his retirement from Formula One.

He was aided by a series of desperately unlucky blows for Fernando Alonso, allowing Schumacher to cut Fernando Alonso’s lead by a maximum ten points.

The highlight of the race was undoubtedly Robert Kubica scoring his – and Poland’s – first ever podium finish in a Formula One Grand Prix. Sadly for the Pole, that was substantially overshadowed by the championship controversies and talk of Schumacher’s retirement.

By lap 41, it looked as though Fernando Alonso had defied enormous misfortune to score a battling podium finish against the odds. And then his Renault engine exploded, possibly detonating his championship chances along with it.

Hours earlier, Alonso had fired a scathing condemnation of the race stewards in a packed press conference. The stewards had sent him from fifth to tenth on the grid for allegedly impeding Felipe Massa in qualifying, “F1 is not a sport” spat a furious Alonso.

If he could draw any consolation from qualifying it was that Kimi Raikkonen had kept Michael Schumacher off pole position. The ‘impeded’ Massa would start fourth behind Nick Heidfeld, whose BMW had been astonishingly competitive.

Before the first lap was out Heidfeld was scalped by team mate Robert Kubica (up from seventh) and Jenson Button. Alonso pounced too, but by now Heidfeld seemed to have woken up to the fact that there was a race going on and defended at Ascari and Parabolica.

As lap two started Alonso drew alongside and past Heidfeld, but skidded past the first chicane. But the stewards chose to uphold the revised chicane rules that Schumacher had exploited at the Hungaroring, and Alonso went unpunished.

This left Raikkonen and Schumacher streaking ahead out front, 8.1 seconds clear of third-placed Kubica after six laps.

But despite being the best part of a second slower than the Ferraris, Kubica deployed the BMW’s prodigious straightline speed to impressive effect to keep an increasingly frustrated Massa at bay.

In the early laps the order remained stable. Alonso took an occasional look at Button but mainly seemed preoccupied with staying out of the Englishman’s draft to keep his engine temperatures down.

De la Rosa signalled the start of the pit stops on lap 14, to be followed by his team mate on the next lap. This was crucial, because Raikkonen pitted one lap earlier than Schumacher. This was all it took to give Schumacher the lead.

Alonso was having to work appreciably harder for his points. He pitted on lap 19 with Massa, and remained behind the Ferrari. Button pitted on the following lap but Alonso scrambled past him at the second chicane.

Next time round Heidfeld popped out of the pits, surprisingly ahead of Alonso. It eventually transpired that Heidfeld had broken the pit lane speed limit and returned to serve a penalty on lap 24 – but not before Alonso had lost a precious three seconds.

While all that was going on Kubica was making history. The first Pole to lead a race stayed at the front of the pack for six laps before the inevitable pit stops came. But it proved the BMW’s qualifying pace was genuine – and he put team mate Heidfeld emphatically in the shade.

Alonso now began to close on Kubica and Massa. The latter twitched wide at Lesmo 1 on lap 26, churning a cloud of dust into the air, but pressed on.

Schumacher eased ahead of Raikkonen and their last stops, on laps 39 and 38 respectively, pulled them further apart. The race for the win was over.

But when Massa pitted directly after Schumacher it afforded Alonso a window of opportunity. He drilled in two laps as quickly as he could in Kubica’s slipstream, then the two of them dived for the pits together as lap 41 began.

The Renault mechanics sprang on the number one car and in a matter of seconds leapt back off again. As Alonso drew towards the BMW pit Kubica slithered out and pulled directly alongside the Renault.

Kubica had BMW power but the superior traction of Alonso’s Renault clinched third place for the Spaniard. Both of them beat Massa to the first corner. And crucially, Alonso had shrunk Schumacher’s potential points advantage to just four.

But now it was lap 43, and time was up for Alonso.

Perhaps it was the strain of sitting stationary in the pits with no cooler that did for his new-specification engine. Or perhaps sitting in the hot slipstream of Massa for lap after lap. Whatever did for Alonso’s engine, it erupted less than half way through its anticipated life cycle, provoking unrestrained hysterics among the Tifosi.

Alonso’s misfortune caused him to impede Massa in a rather more direct fashion than he had been accused of earlier. Blinded by smoke, the Brazilian hurtled past the first chicane and ruptured a tyre. By the time he’d limped into the pits and come back our again he’d dropped out of the points completely.

In the dying stages of the race he caught Jarno Trulli and Heidfeld, battling over seventh place. He had no more luck in displacing Heidfeld than he had with Massa earlier.

There had been little overtaking aside from that which occured through or immediately after the pit stops. The final laps ticked by without change to the order.

Kubica’s drive to third was the standout performance of the day – at least out of the drivers who finished the race. Giancarlo Fisichella rose to fourth ahead of the two underpowered Hondas of Button and Rubens Barrichello. Trulli held off Heidfeld, who remained unperturbed by Massa’s advances.

Schumacher scorched across the line to take his 90th victory, and as he slowed for the victory lap uttered the words that his fans had been dreading all year.