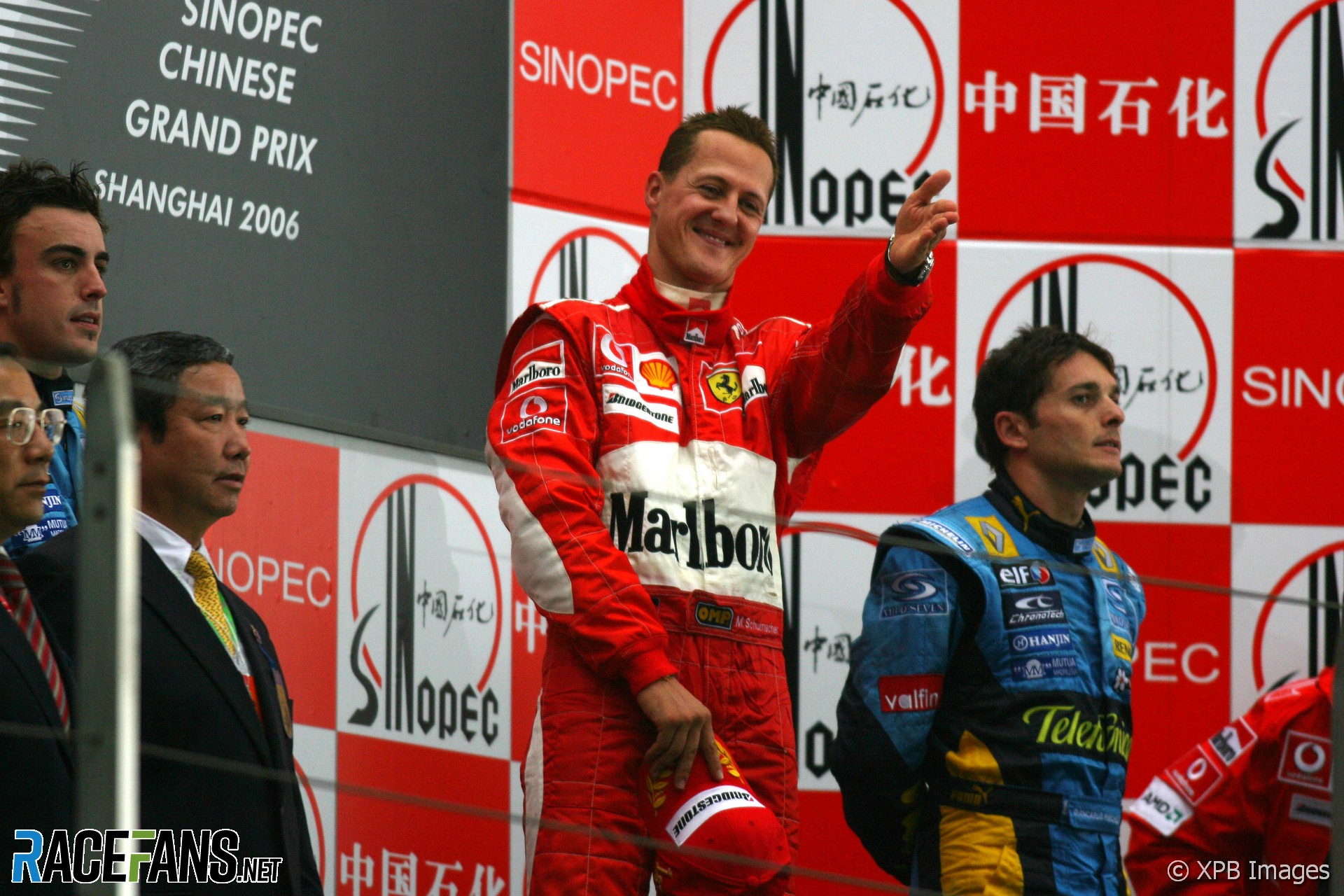 Fernando Alonso would be leading this year’s championship by 15 points if it weren’t for the man who changes his right-rear wheel.

Instead he is tied with Michael Schumacher with only two races remaining.

If fortune favoured Alonso in qualifying, it deserted him for Schumacher during the race. Unfortunately for Alonso, you don’t score points on Saturday.

A wet track greeted the teams ahead of qualifying – manna for Michelin, but potentially a disaster for Bridgestone.

The first six cars to be eliminated were all Bridgestone runners – the Super Aguris, Toyotas and newly-liveried Spyker-Midlands. By the end of the second session there was only one Bridgestone driver left – Michael Schumacher.

A sublime lap late in the session got the seven-time champion into the final part of qualifying. A similarly cool-headed performance put him an excellent sixth on the grid – but ahead of him lay a Renault lock-out of the front row, both Hondas, and Kimi Raikkonen.

The race started on a heavily wet track, but with no rain falling the track would gradually dry, meaning the Bridgestone runners would not suffer the same disadvantage they did in qualifying.

Despite the treacherous conditions and sinuous first turn, the start was clean. Predictably the two Renaults zapped away from the field with their superior traction.

Behind them, Raikkonen drove around the outside of both Hondas at turn one, but a twitch of oversteer saw Jenson Button barge back ahead. Schumacher held sixth, defending fiercely from Pedro de la Rosa.

Alonso judged the conditions on the first lap exquisitely, pulling 2.6s ahead of Fisichella. Raikkonen picked off Button towards the end of that first lap and set off after the Italian.

Further back, Felipe Massa’s race had begun from the back of the grid as he had failed to progress beyond the second stage of qualifying and taken a ten-place drop on the grid due to an engine change. At the start he moved past the Spykers and Super Aguris, and sat behind Ralf Schumacher’s Toyota.

The Toro Rosso drivers, however, were making the most of the traction their combination of V10 engines and Michelin tyres provided: Scott Speed had vaulted into eighth with team mate Vitantonio Liuzzi tenth.

BMW rookie Robert Kubica ran wide at the first turn having started 9th. But he quickly began fighting back through the field, passing Nico Rosberg for 13th on lap five.

As the track dried so it became more suitable for the Bridgestone runners. On lap eight Mark Webber past David Coulthard for 11th. Further back, Massa passed Ralf Schumacher but ran wide and had to start over again.

The elder Schumacher exploited the extra grip to pass Rubens Barrichello on lap nine. On the same lap Webber passed Liuzzi for tenth and Massa finally put one over Ralf: the Bridgestones were definitely working now.

Coulthard, having narrowly failed to make it into the final phase of qualifying, started the race heavy with fuel and a train of cars formed behind him: Nico Rosberg, making occasional runs at the Red Bull, Jarno Trulli, Massa and Ralf Schumacher.

By lap ten Massa was ahead if Trulli. He passed Rosberg on the following lap and soon scalped Coulthard, too.

Button provided little resistance to Schumacher: the German caught him and breezed past, losing little time. His next target would be Fisichella, who Raikkonen had recently gotten ahead of.

Rear tyre wear was apparently the reason for Button’s lack of defensive vigour. This became clear as the Briton signalled the start of the pit stop sequence on lap 15, dropping from fifth to ninth.

Two laps later Raikkonen was in but his race wasn’t to last much longer. On lap 19 his McLaren ground to a halt, temporarily resolving any awkward questions about how the Ferrari-bound driver might interfere with the championship battle.

Schumacher had caught Fisichella by lap 17 which also saw the high-watermark of Alonso’s lead: 25 seconds. De la Rosa and Barrichello both pitted and the latter resumed ahead of his team mate.

Button, distracted, was passed by the ever-improving Kubica. The Polish BMW driver then got to grips with De La Rosa, passing the sole remaining McLaren for seventh. Massa, too, got the better of Button.

Schumacher made his pit stop on lap 20 but the Renault team suffered a shock as they prepared for Alonso’s visit. The electricity supply to their pit wall failed on the lap before the Spaniard came in.

Most teams were electing to pit drivers for fuel but not change the tyres – better to stick with worn, warm rubber than cooler, fresh tyres. But Alonso reported damage to one of his front treads, so only the rears were left unchanged.

While all this was going on the track continued to dry – so much so that taking on dry tyres began to look like a realistic option. So much so that when Kubica made his first pit stop on lap 24, having set the fastest lap of the race so far at 1m 42.0, he gambled on a set of ‘slick’ grooved tyres.

But his move proved to be premature and he spun off twice on his first lap out of the pits.

Kubica’s plight made Alonso’s situation even more desperate as he floundered around the circuit, waiting for an opportunity to switch to more suitable rubber. He languished in the 1m 44s while Fisichella and Schumacher dipped into the 1m 41s.

Rosberg made the switch to dries on lap 32 and when he found grip it signalled to the rest of the teams that now was the time to abandon intermediates. Alonso didn’t hesitate and darted for the Renault garage on his 34th lap.

Dry weather tyres awaited Alonso but disaster struck again as the right-rear wheel nut jammed – exactly the same part of the car that had failed at the Hungaroring. He sat in the pits for 19.2 seconds and resumed 54s behind Schumacher.

Button and Massa made trouble-free stops for standard grooved tyres on the same lap. One by one the field switched en masse to dry weather tyres, but how well they fared with them was often dictated by how aggressively they treated the tyres to generate heat in them,

Pedro de la Rosa was one who was caught out, spinning at turn one. Massa spun too. Schumacher made his stop on lap 39, followed by Fisichella on lap 40. But Fisichella tip-toed calmly out of the pits and slithered ineffectually into turn one, ran wide, and Schumacher blasted past.

Massa recovered from his spin to hound Coulthard for the last points-paying place – which could have proved crucial for the Constructors’ Championship. But Coulthard inadvertently turned in on the Ferrari at the hairpin and banged wheels with the Brazilian.

With ten laps to go Alonso began attacking the 14-second gap to Fisichella – with Schumacher a further six ahead. Throwing caution and concern for the championship to the wind he drove with total commitment. While other drivers felt for grip levels and built up speed, Alonso was locked on to the dry weather line like a slot car.

On lap 48 he blew past Fisichella on the straight and continued after Schumacher. With seven laps remaining Schumacher had 12.6s of his lead left which, even with Alonso taking whole seconds per lap out of him, looked enough for the German to stroke the Ferrari home.

But on lap 51 rain began falling again and as Schumacher became more hesitant, Alonso pressed on. When Schumacher crossed the line Alonso was a scant three seconds adrift.

One more lap and Alonso could have won. Without the fumble in his second pit stop, he definitely would have won, regardless of his earlier tyre problem.

Button triumphed in a fraught late scrap over fourth. On the final lap with the track suddenly getting wetter he not only passed Barrichello, but also Heidfeld. Barrichello then thumped into Heidfeld, allowing de la Rosa to rise to fifth. Barrichello limped in sixth ahead of Heidfeld.

The final place in the points was claimed by Webber, who finally broke Williams’ achingly long point-less streak. He held off Coulthard by a mere two tenths of a second.

If Alonso’s luck continues like this, Schumacher can take his eighth title for granted. Both suffered ill fortune in China, but it all went wrong for Alonso when it mattered most.

The Renault driver may take heart from the speed his car showed relative to the Ferrari in the closing stages. But when will the bad luck – and the mistakes of his team – stop getting in the way?