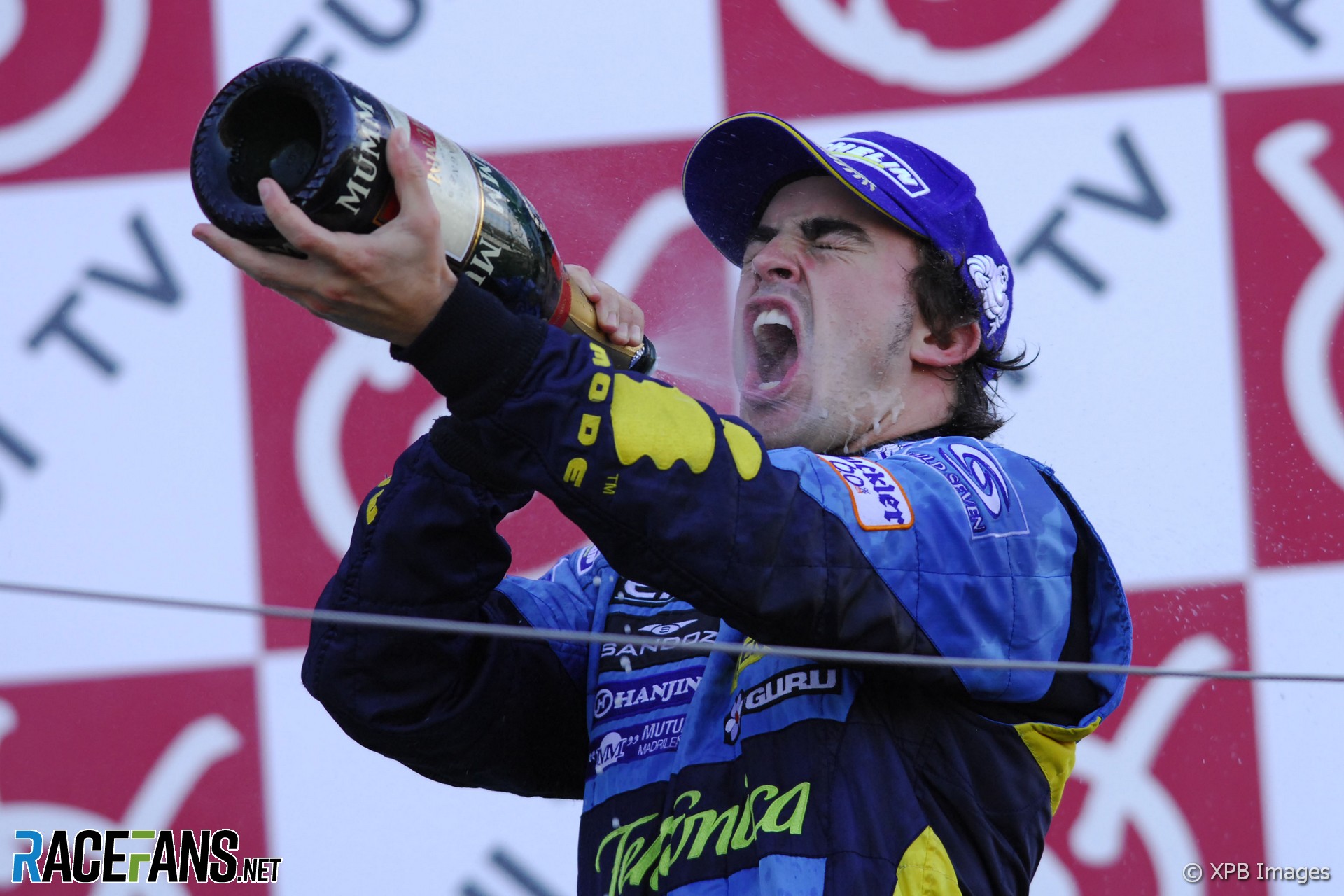 Fernando Alonso knows that only misfortune is likely to keep him from a second consecutive world championship.

Michael Schumacher’s engine failure on the 37th lap of the Japanese Grand Prix effectively returned to Alonso the ten points he had lost in Italy four weeks ago when his own engine failed.

It means that the only way Schumacher can become champion is to win the final round with Alonso failing to score.

After qualifying Fernando Alonso dare not have dreamt that the Japanese Grand Prix would give him the perfect possible result for the championship battle. Certainly not after Schumacher had blitzed the Suzuka circuit 1.902 seconds faster than the Spaniard in final practice.Bridgestone’s latest tyre construction was providing sensational grip – for a single lap at least. Not only did Ferrari annex the front row but both Toyotas grabbed the second, pushing Alonso down to fifth.

Felipe Massa took pole, although many expected him to have a couple of laps’ less fuel in the tank than Schumacher.

Alonso once again had team mate Giancarlo Fisichella close at hand, though the Italian had suffered the loss of a friend earlier in the weekend and his mind and heart were plainly on more sobering matters.

The fourth row belonged to another constructor – Honda, out to prove that they were the supreme Japanese team in the face of Toyota ‘stealing’ the Japanese Grand Prix from 2007, taking it to the Fuji Speedway.

As the red lights faded out the Ferraris held station and Alonso feverishly tried to separate the Toyotas. He finally succeeded in nipping past Jarno Trulli at the second turn.

Behind him Fisichella had surprisingly lost a position at the start, to Jenson Button – a rare defeat for the Renault’s prodigious traction control.

Even more surprisingly, however, the Ferraris were not scampering off into the distance. On lap two Massa yielded the lead to Schumacher, easing off the throttle on the straight for no apparent reason – or at least, because of no apparent orders.

Behind the leading six Kimi Raikkonen had moved up from a dismal eleventh on the grid to ninth behind Button and Nick Heidfeld. Heidfeld’s team mate Robert Kubica was dropping back from the McLaren with a train of cars on his tail.

Fisichella soon undid Button’s damage and began to catch Trulli. Alonso was all over the other Toyota of Ralf Schumacher, running wide at the hairpin on one lap, getting crossed up at Degner 2 on another.

Finally on lap 12 he got enough of a tow from the chicane to dive past the younger Schumacher as they swept into the first turn.

The reality of Toyota’s qualifying pace became apparent when Trulli made his first fuel stop as early as lap 12, followed by his team mate the next time around. Also in on lap 13 was Massa, apparently nursing a puncture, though not stopping all that much earlier than team mate Schumacher.

The combination of a slightly earlier than planned stop, an indifferent out lap, and traffic in the form of Heidfeld’s BMW, meant that when Alonso stopped on lap 15 he emerged from the pits narrowly ahead of Massa – a net second place.

After Schumacher made his stop the Ferrari driver held a 5.4s advantage over his Renault rival. Alonso led Massa by 3.0s with Raikkonen, yet to stop, a further 1.5 back. Trulli had leapfrogged Ralf Schumacher via the pit stops – but the Italian’s lack of pace would frustrate his team mate.

A safety car period at this point would have put the title contenders nose-to-tail – and it very nearly happened. Christijan Albers’ Spyker shed its rear wing, right rear wheel and most of its differential on the way into the chicane, showering the track with debris. Some very ballsy marshalling kept the race going uninterrupted.

At first Alonso seemed not to need artificial help to catch Schumacher. By lap 27 he had whittled the gap down, a tenth here, a tenth there, to 4.2s. But then the two hit traffic and unusually, it was the first car on the scene (Schumacher’s) that got through more easily. The gap grew to 5.9s.

Several drivers struggled at Degner, with both Scott Speed and Robert Kubica finding their way off there. Both kept going, but Mark Webber was not so lucky on lap 40 when he ran wide at the final corner and smacked his Williams into the barrier. There would be no repeat of his points score at China.

Alonso had gradually pulled away from Massa through the second stint. Because of that although they both pitted on lap 35, Alonso was pulling away while Massa was pulling in.

It was a surprise to see Schumacher come into the pits on the very next lap, which suggested that Ferrari had brought his stop forward to guarantee he would retain track position over Alonso.

But that was nothing compared to the surprise that was to follow: on the next lap, heading into Degner, Schumacher’s Ferrari began churning smoke like it was a locomotive. He rolled to a halt beneath the bridge at the cross over.

It was an anti-climactic end to a very tense race, for now Alonso led with a comfortable 10s cushion over Massa, and Fisichella further back in third.

The Toyotas contrived to compromise themselves out of the running for the upper points positions. While Trulli delayed Ralf Schumacher, Button and Raikkonen came past to take fourth and fifth respectively.

Kubica chased down Heidfeld and received confirmation (indeed, encouragement) from his team that he could race his team mate and take the last points place from him. Heidfeld stayed ahead though.

Alonso’s win was his first since the Canadian Grand Prix in June. For his championship hopes, it was nothing if not overdue.

He could not be in a stronger position going into the final race – but he knows better than to write off Michael Schumacher’s chances, however long the odds may be.

4 comments on “Advantage Alonso as Schumacher retires at Suzuka”