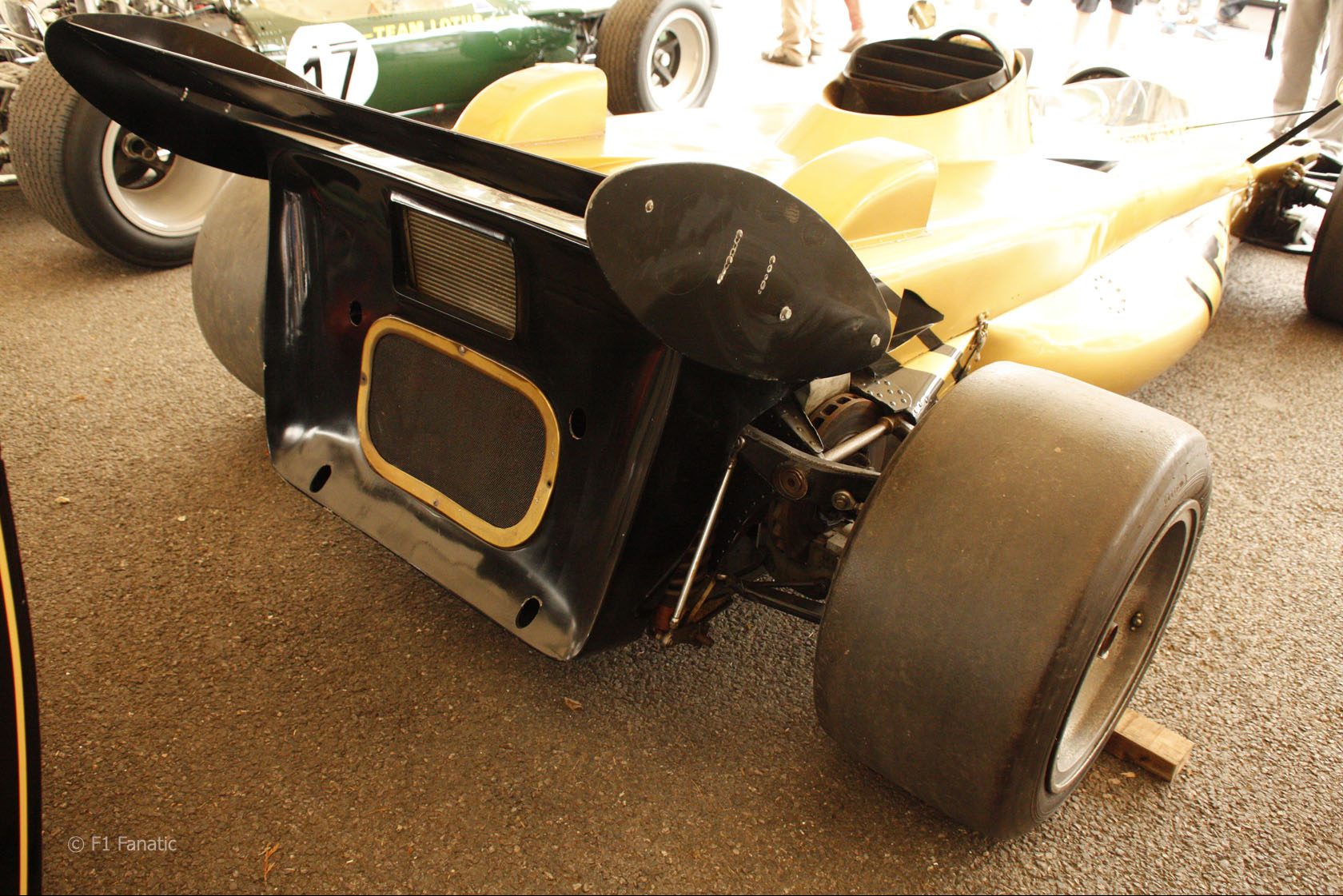 Think of unconventional Formula 1 technology and you instantly think of Colin Chapman.

The Lotus boss, who died 25 years ago, understood that innovation was not just positive for its own sake, but that it also had publicity value.

His gas turbine powered 56B F1 car was plainly a case of the latter over the former. The technical obstacles proved insurmountable and the idea was eventually dropped.

First of all for any non-technical people let’s get the obligatory science bit out of the way.

In an ordinary combustion engine, the explosive burning of petrol is used to push a number of pistons up and down, which turns a crankshaft which is eventually connected to the car’s wheels.

This is turbine power at its most basic – turbines also use the gases to maximise power output in other ways. But what we’re really interested in here is how they were used in F1 cars.

The idea of using turbines in a racing environment was actually imported from America. In 1966 a car dubbed the Jack Adam Aircraft Special was fitted with a 1,350hp General Electric T58 turbine for the Indianapolis 500.

The car’s acceleration was enormous, but the combination of the hugely powerful engine with a five year-old chassis and poor brakes proved un-driveable. Racer Bill Cheesebourg ran the car in pre-qualifying but wisely elected not to qualify it.

The United States Automobile Club acted quickly to restrict turbine power to prevent a similarly dangerous entry in the future. But in 1967 Andy Granatelli’s turbine-powered car led much of the race before dropping back in the late stages with gearbox failure.

Nonetheless Chapman and Granatelli together planned a turbine entry for 1968 the four-wheel drive Lotus 56 chassis and Pratt & Whitney STB-62 gas turbine engines. Jim Clark and Graham Hill would drive the entries, with a third run by oil supplier STP for Greg Ward.

A cruel blow of fatalities struck Lotus at this time. First Clark was killed in a Formula 2 race at the Hockenheimring in April. Then at Indianapolis his replacement Mike Spence was killed driving one of the turbine cars when he ran wide on one of the turns.

None of the three entries finished the race – Hill’s suspension broke and STP’s two entries – now driven by Joe Leonard and Art Pollard – both retired after fuel pumps that had been changed at Pratt & Whitney’s behest both failed.

Chapman either retained some faith in turbine power, or recognised its publicity value, or both. Whatever, he began talks with Pratt & Whitney to develop the engine for Formula 1.

Turbines were even less well-suited to F1 than Indianapolis. The fast, wide Indy oval allowed the drivers to keep the turbine engine running constant high revs, as it was designed to. But the twists of F1 road courses demanded the kind of flexible power delivery gas turbines couldn’t supply.

Nonetheless a 56 chassis was customised into a 56B to accept the engine. Chapman originally hoped to run the car at Monza in 1970, but did not want to jeopardise Jochen Rindt’s title bid. He took the normal car instead and, as misfortune would have it, Rindt died in a crash in qualifying, yet still won the title posthumously.

The turbine car had many shortcomings. Lag in power delivery was massive – although Pratt & Whitney’s technicians managed to halve the delay using lighter components it was still up to three seconds.

The phenomenon also occurred in reverse – when a driver backed off the throttle the engine still delivered maximum power, meaning it had to be manhandled to a halt (it had no gearbox) using enormous brakes that wore out quickly.

The engine was fuel thirsty to begin with and the efforts to reduce lag only made it even less efficient.

It did, however, have certain advantages that even today would make the engine worth considering if it were allowed by the rules. The units had great longevity – the Pratt & Whitney engines needed replacing every 1,000 hours – or 500 Grand Prix distances. Makes today’s two-race engines seem rather delicate, doesn’t it?

It was also very light and compact compared with standard engines of the time.

The car made several appearances in 1971, making its debut at the Race of Champions at Brands Hatch in March. Emerson Fittipaldi retired the car after its persisting bottoming on the bumpy track broke the right rear suspension. It also retired from its second outing with Reine Wisell at the wheel.

Fittipaldi drove again at the International Trophy race at Silverstone where the car was fitted with larger brakes. He retired from the first heat but finished third in the second after several top drivers had retired.

Dave Walker drove it at the Dutch Grand Prix at Zandvoort but crashed out on lap six. The strange characteristics of the cars peculiar power delivery and enormous braking demands could easily catch out a driver.

Wisell drove once more in the British Grand Prix and finished, albeit 11 laps adrift and unclassified. Fittipaldi made a heroic effort at Monza to finish eighth, one lap down, with two cracked brake discs.

Curiously the car also started a Formula 5000 race and finished second in both heats.

The enormous shortcomings of the car clearly contributed to its retirement at the end of 1971.

Perhaps Lotus could have persevered with it, as Renault did with turbo power from 1977. But it is more likely that, faced with more limited resources than a major car manufacturer, the team found results came more easily with the more conventionally progressive 72D, which carried Fittipaldi to the 1972 championship.

Under the strict engine rules of today, turbine engines are inadmissible. But it’s fascinating to wonder whether sustained development by a top F1 team could ever have made them a realistic proposition, as turbos were.