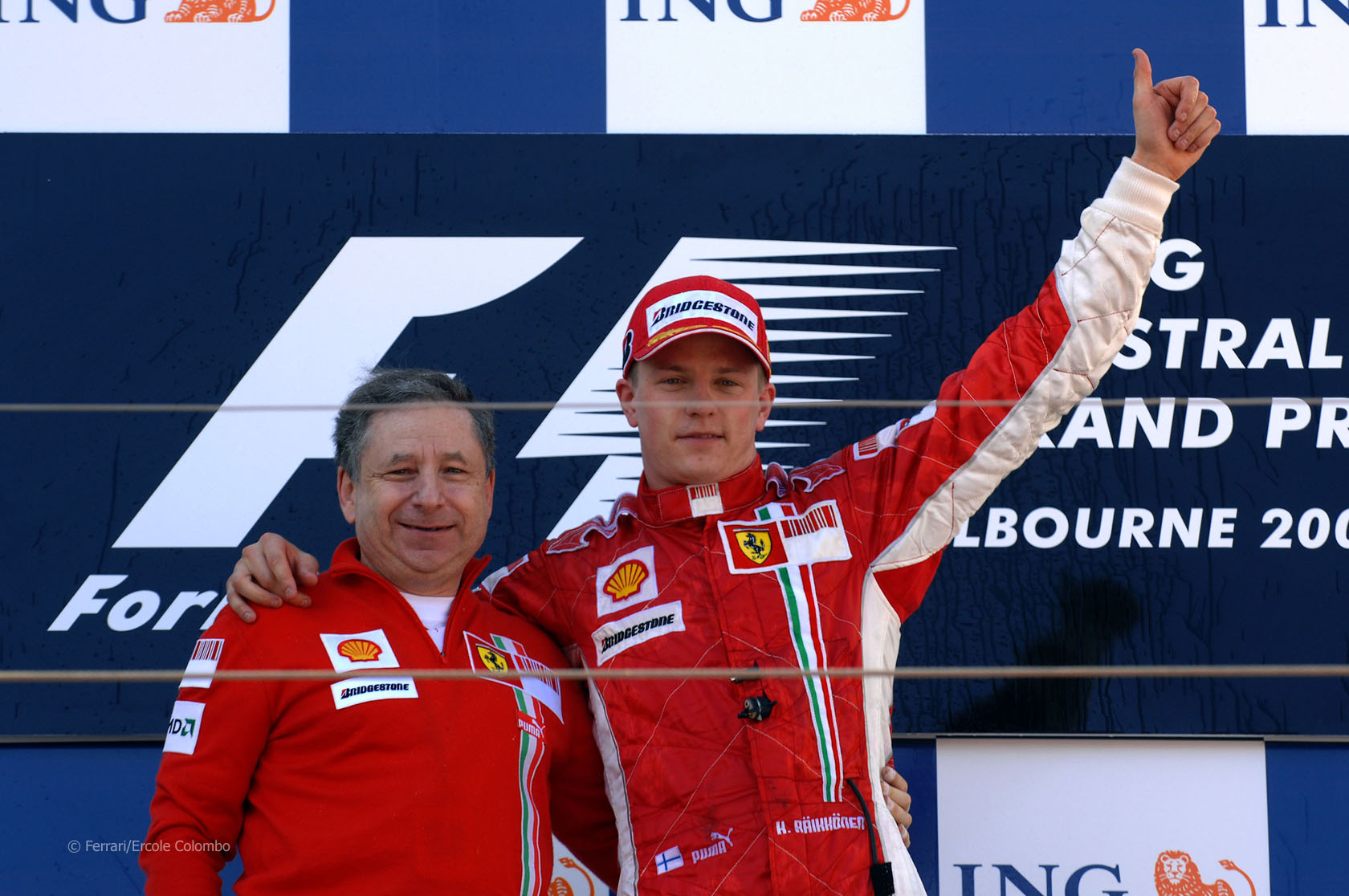 Kimi Raikkonen got his world championship bid for Ferrari off to the best possible start with a clinical victory in the Australian Grand Prix.

But the race was also notable for an impressive debut performance by Lewis Hamilton, who stormed ahead of team mate Fernando Alonso at the start and took a podium finish for McLaren.

With a great drive by Nico Rosberg and a fine recovery from dead last for Felipe Massa, there were plenty of talking points after the Australian Grand Prix.

The only change overnight to the line-up of the grid was Massa, who qualified 16th after gearbox problems, but dropped to the back of the grid following an engine change.

It meant Ferraris started the first race of the year first and last but, curiously, Ferrari did not choose to start him from the pit lane and avoid any dramas that might happen in the first corner.

Jarno Trulli’s Toyota smoked heavily off the line on the formation lap, having done the same when the Italian left the pits a few minutes previously.

As the red lights went out Anthony Davidson was left on the line, forcing Heikki Kovalainen and Alexander Wurz to take avoiding action.

Ahead Robert Kubica squeezed Hamilton to the inside of the first corner, but the Briton responded by driving around the outside of Kubica and team mate Alonso.

Raikkonen made a scorching getaway and the at the end of the first lap by 1.4s from Nick Heidfeld, Hamilton, Alonso and Kubica. Trulli’s Toyota got away cleanly and he passed Takuma Sato on the first lap.

Sato’s team mate Davidson, though, had fallen to the back and was thumped by Adrian Sutil’s Spyker.

Massa made steady progress in the early laps, 18th after one lap and up to 15th by lap six after passing David Coulthard. But then his ascent was halted by the two Hondas of Jenson Button and Rubens Barrichello, forcing Massa to lap up to 3.5s slower than team mate Raikkonen.

Raikkonen was able to pull away from Heidfeld at will, occasionally reeling off a new fastest lap. Hamilton and Alonso queued behind Heidfeld, each around two seconds in arrears.

Chrisitijan Albers became the first driver to retire from a race in 2007, crashing out at turn three on lap 11. Unusually, he later blamed a loose earplug.

Three laps later Heidfeld was the first to pit, having started on soft tyres he switched to the harder compound.

Now Barrichello solved his Button problem by capitalising on his team mate’s loose car through the fast turns 11 and 12. Two laps later Massa did the same, bumping Button down to 15th.

The battle for the lead now took a decisive turn as Raikkonen pitted – meaning that Hamilton was now the leader on only the 19th lap of his F1 career. Raikkonen’s 15 second lead meant he resumed fourth, behind the McLarens and ahead of Kubica.

This signalled the beginning of the first pit stops with Fisichella pitting from sixth, resuming between the two Toyotas and squeezing Trulli onto the grass at turn one.

Kubica was in next time around too and he remained fourth having effectively passed his team mate. On lap 22 Alonso was in too and continued on hard tyres, and he too had passed Heidfeld.

Hamilton’s hopes of staying ahead of Alonso were hit as he was baulked by Sutil’s Spyker on his way to the pits. Hamilton narrowly stayed ahead and the gap to Raikkonen had fallen from 15s to 11s – Sutil picked up a penalty for ignoring the order to let Hamilton lap him.

Webber had also made his stop and resumed narrowly ahead of Wurz – who passed him for 15th on lap 23. Ralf Schumacher and Sato also made their stops.

This had now promoted Massa to tenth – but 42s behind Raikkonen. The lead Ferrari was now lapping in the low 1m 27s, much closer to the McLarens’ pace, but Hamilton lost half a second on lap 26 as he put a wheel through the dirt.

Kovalainen and Rosberg pitted together on lap 27 but the came out in the reverse order as Rosberg’s stop was slightly quicker. This now left Massa as the highest running drivers who had started outside the top ten, in seventh, and in clear air he was able to match Raikkonen’s pace.

Hamilton had a much bigger blip on lap 28, losing over 2.5s to Raikkonen on a single lap.

Massa finally pitted on lap 29 and came back out behind Kovalainen in tenth. But a second of the Ferrari-powered runners was out as Scott Speed pulled off with a burst tyre.

Button, too, was out of luck, picking up a drive-through penalty for speeding in the pits. Hamilton may have been second, but fellow Britons Coulthard, Button and Davidson were 16th, 17th and 19th and each a lap behind.

By lap 32 Raikkonen’s 17 second lead of the first stint was restored, despite being held up briefly while lapping Barrichello.

Behind the three leading cars Kubica led Heidfeld, Fisichella, Ralf Schumacher, Rosberg, Kovalainen and Massa, up from dead last. After those, only Trulli and Sato remained on the lead lap.

BMW’s off-season unreliability caught up with Kubica on lap 36. On the same lap Rosberg put a strong pass on Ralf Schumacher at the highly unlikely location of turn nine.

Massa, running heavy with fuel after his first stop, suffered the indignity of being lapped by his team mate. Raikkonen set another fastest lap as the time of his second stop drew close. Heidfeld was first to pit a second time, on lap 39.

But Massa got a bonus on lap 40 when Kovalainen’s increasingly unstable Renault pirouetted at turn one, promoting the Ferrari driver to eighth.

It now transpired that Raikkonen had kept a few trump cards up his sleeve as he banged in a scorching 1m 25.235s lap before his pit stop on lap 41. He emerged almost directly behind the McLarens.

Hamilton made his next stop much sooner after Raikkonen, ducking into the pits as he hit traffic switching to the soft tyres. Fortunately he was not delayed by Webber, who spun into the pit lane from the final corner.

Alonso only had one lap more in his pocket but it was enough to carry him past Hamilton after he had made his stop.

If the race order at the front looked settled everything almost changed on lap 47 as Raikkonen had an enormous moment at turn three.

Nonetheless, Raikkonen’s pace was so intense that only six drivers remained on the lead lap with Heidfeld fourth, Fisichella fifth and Massa, sixth, having unlapped himself. The two other drivers in the points placings were an enormously impressive Rosberg, seventh, and Ralf Schumacher.

Coulthard’s race ended on lap 49 in an alarming collision with Wurz. The two clipped front and rear wheels at turn three, pitching the Red Bull into the air and passing shockingly close to Wurz’s helmet. Both were out on the spot and Coulthard, probably correctly, took responsibility.

The leading five drivers all had their engines turned down heading into the final laps, but a significant battle remained between Fisichella, sixth, and Massa. With six laps to go the Ferrari driver was within three seconds of the Renault and slashing over a second a lap out of the gap.

It was a tense end to the race for both Renaults as Kovalainen’s driving appeared increasingly scrappy, his R27 frequently taking to the dirt.

Massa was all over Fisichella’s rear wing as the 55th lap began and thoughts turned to Fisichella’s hopeless defence of the lead at Suzuka from Raikkonen two years earlier. Would we see a repeat?

For Raikkonen it was time to take his first win since that memorable day in Japan, while the two McLarens followed him home – Hamilton sensationally on the podium on his debut.

Behind Heidfeld, Fisichella’s defence proved impregnable this time, holding off Massa by 0.3s. Rosberg gave Williams a cheerful start to the year, scoring two points, and Ralf Schumacher gave Toyota something to smile about after a difficult winter by scoring the final point.

Trulli backed him up in ninth, narrowly holding off Kovalainen and Barrichello, the latter having done a commendable job with the awkward RA107.

Sato, 12th, didn’t manage to translate his top ten start into a first points finish for Super Aguri. Webber may well have been pleased simply to see the finish after his troubles with the RB3, but 13th from 7th was probably not what the home crowd wanted to see.

Liuzzi, Button, Davidson and Sutil were the last of the finishers – Button struggled more visibly with the Honda than his team mate, and Davidson never recovered from his poor start.

An unpredictable season has a familiar look with Ferrari fastest but champion Alonso in close attendance and giving away nothing. But in Hamilton the sport has a truly exceptional star of the future.