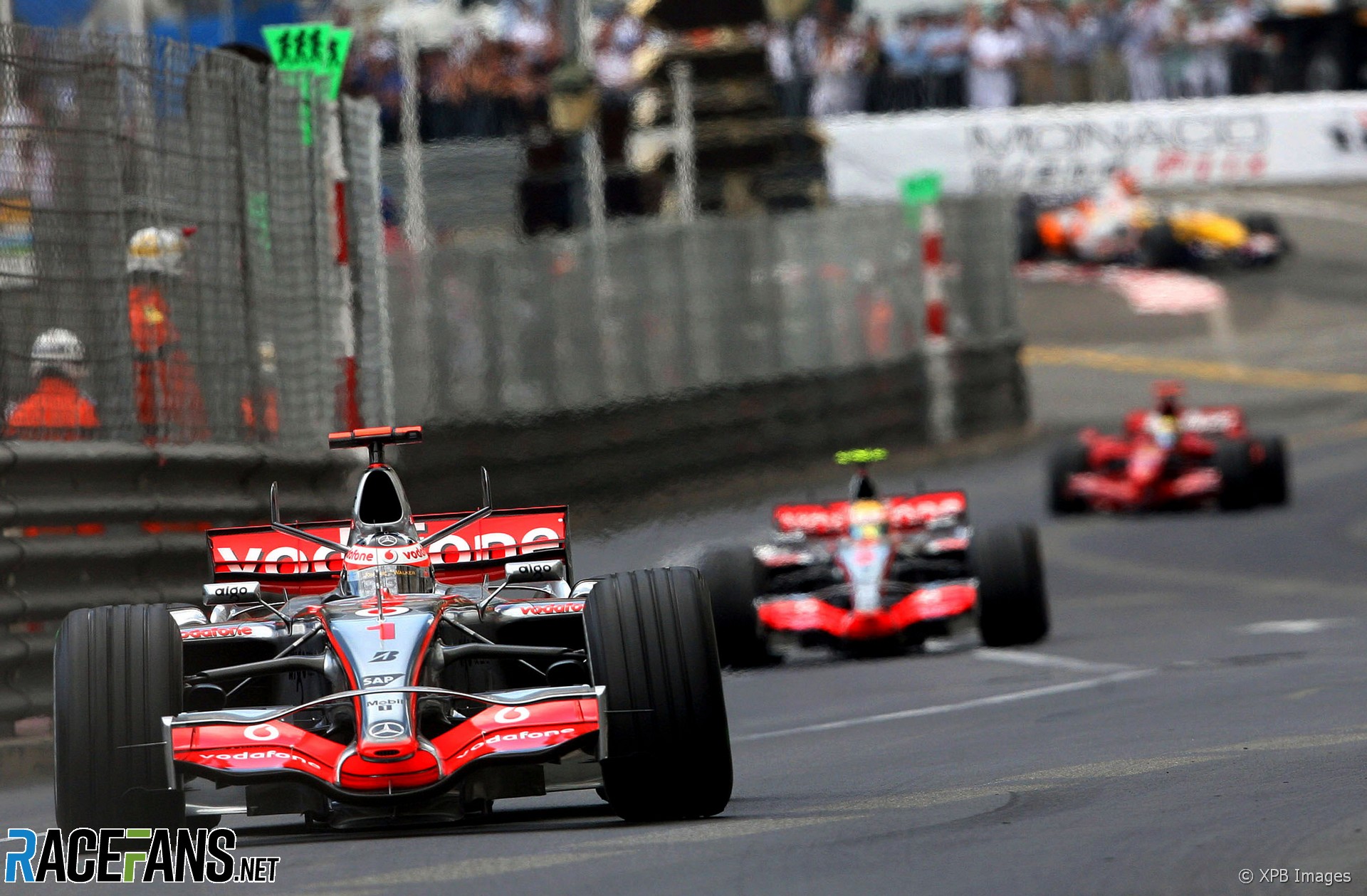 Fernando Alonso and Lewis Hamilton gave McLaren their second one-two of the year in the Monaco Grand Prix.

The silver crew comfortably had the beating of Ferrari at Monte-Carlo – but they still let their drivers fight around every corner of the circuit for the victory.

By the time they cooled off the battle in the dying stages Felipe Massa’s previously dominant Ferrari was almost a minute behind.

The result puts the McLaren duo tied on points at the head of the championship, Alonso ahead by dint of his two victories.

Hamilton and Giancarlo Fisichella obviously felt that starting on the left was a disadvantage, as they both swept across to the right to delay their rivals as the red lights went out.

Hamilton followed Alonso around Sainte Devote with an orderly field behind them.

Felipe Massa and Fisichella stayed third and fourth. But Nick Heidfeld made an opportunistic start, vaulting up to fifth by passing Mark Webber and Nico Rosberg around the outside.

This consigned Rosberg to staring at Heidfeld’s rear wing for much of the first stint as Heidfeld was one of only three drivers to start on the less durable, softer rubber. The other two were Takuma Sato and Christijan Albers.

Vitantonio Liuzzi threw away a fine qualifying effort in the barriers at Massenet on the second lap. The incident was cleared away under waved yellow flags without the safety car being summoned.

Kimi Raikkonen made up a few places at the start, aided by Jarno Trulli’s slow starting Toyota and Liuzzi’s crash. He arrived in 12th behind Jenson Button – whom Michael Schumacher has spent a large part of last year’s race stuck behind.

The leaders stretched apart with Alonso pulling out a 4.9s gap by lap 12, and Massa a further three seconds behind. Fisichella was a lonely fourth, 15.7s behind Alonso and 15s ahead of Heidfeld and Rosberg.

Rubens Barrichello made a good start in his Honda to hold seventh, five seconds behind Rosberg, with Mark Webber and Robert Kubica behind him.

By lap 17 the leaders were passing the stragglers – the first of which to go a lap down was Ralf Schumacher.

As Alonso got stuck into a gaggle of traffic Hamilton suddenly picked up the pace. He took 1.2s off Alonso on lap 19 and a huge 3.5 on the next. The back end of the McLaren twitched crazily into the harbour chicane and through the swimming pool.

But Hamilton lost almost the same amount of time when he came up to pass Trulli, the Super Aguris and Adrian Sutil’s Spyker.

Now the race was on between the McLarens. Hamilton had taken four seconds off Alonso through the traffic but the Spaniard set a new fastest lap of 1’15.7, throwing the McLaren through the swimming pool like a rally car.

Red Bull maintained their monopoly on retirements as Webber parked on lap 18 with more gearbox gremlins.

Fisichella confirmed that his qualifying pace had been slightly down to a lighter fuel load as he was the first driver to pit on lap 23. But his stop was just long enough for him to come out behind Heidfeld’s BMW – Rosberg having also pitted.

Alonso pitted on lap 26, as did Massa, the latter gambling on a switch to softer tyres. Hamilton’s stop came three laps later in which time he made up a few tenths of a second.

Heidfeld made his pit stop shortly afterwards and manage to come out of the pits into the slight gap between Button and Raikkonen. The Finn’s Ferrari was glued to the back of the BMW but he couldn’t find anywhere to get ahead,

The softer tyres were clearly costing Massa a lot of time – he slithered wide at the second part of the swimming pool over the speed humps not long after his stop. By lap 35 he was 29.6s behind Alonso and his fastest lap time was over a second slower than either of the McLarens’.

Davidson hit trouble on lap 37 when he was called into the pits to serve a drive-through penalty for failing to obey blue flags. He was in again on the next lap for his pit stop.

Hamilton had more trouble with traffic when Barrichello exited the pits in front of him and kept him help up around Massenet. Alonso’s 4.4s advantage grew to 5.6s.

But Raikkonen behaved himself when it was his turn to be lapped on the 40th tour. Underlining just how bad a day he was having, when he made his first stop eight laps later he rejoined right behind his team mate.

In the middle part of the second stint Alonso’s decisively quicker pace finally seemed to turn the race in his favour. Alonso stretched his lead to 9.7s by lap 47.

Lap 51 saw Alonso’s second stop and his final move onto the softer rubber. Hamilton’s would follow two laps later – nowhere near enough time to make an assault on Alonso’s advantage.

Massa’s final stop was problematic as his front jack man accidentally dropped the car back down as soon as it had been raised. The Ferrari was stationary for over ten seconds, but he was in no danger of losing third to Fisichella.

Sutil’s strong drive came to an end shortly after when he copied Liuzzi’s crash at Massenet. His Spyker limped around Casino and into retirement.

The McLaren ran close to each other in the dying laps with Alonso content to see the gap shrink to around a second.

Raikkonen’s long, lonely drive had finally brought him into eighth place and within range of Alexander Wurz’s Williams. Wurz’s one-stop strategy had paid off but his team mate’s early first stop and delay behind Heidfeld had seen him drop to 12th.

In the final laps Kubica ran into trouble, losing up to three seconds a lap to the fast-closing Heidfeld. Albers joined his team mate in retirement when he pulled into the pits with only a handful of laps to go.

Alonso continued his metronomic pace until the end to score his second consecutive victory in Monte-Carlo. Hamilton’s took his fourth second place in a row within sight of his team mate.

Hamilton showed none of the respect due to Monte-Carlo by a rookie. He drove every lap to the edge of the barriers yet never put a wheel wrong.

Massa had an uninvolved run to third but he was the only driver the McLarens didn’t lap. Fisichella’s fourth place was similarly uneventful.

Kubica narrowly kept his advantage over Heidfeld, and Raikkonen seemed content to watch the rear wing of Alexander Wurz’s Williams until the end.

Scott Speed was the highest of the Red Bulls in an excellent ninth having started 18th. A strong start had seen him behind Liuzzi when his team mate hit the barriers.

But the Honda duo of Barrichello and Button appeared to have thrown away their best chance of scoring points this year. The team opted to run two very long stints followed by a brief final stint which dropped them to tenth and eleventh.

The race kept the championship battle astonishingly close – just four points cover Alonso, Hamilton and Massa. But the fact remains that the top three finished in the same order they started, and we are yet to see a truly gripping race in 2007.