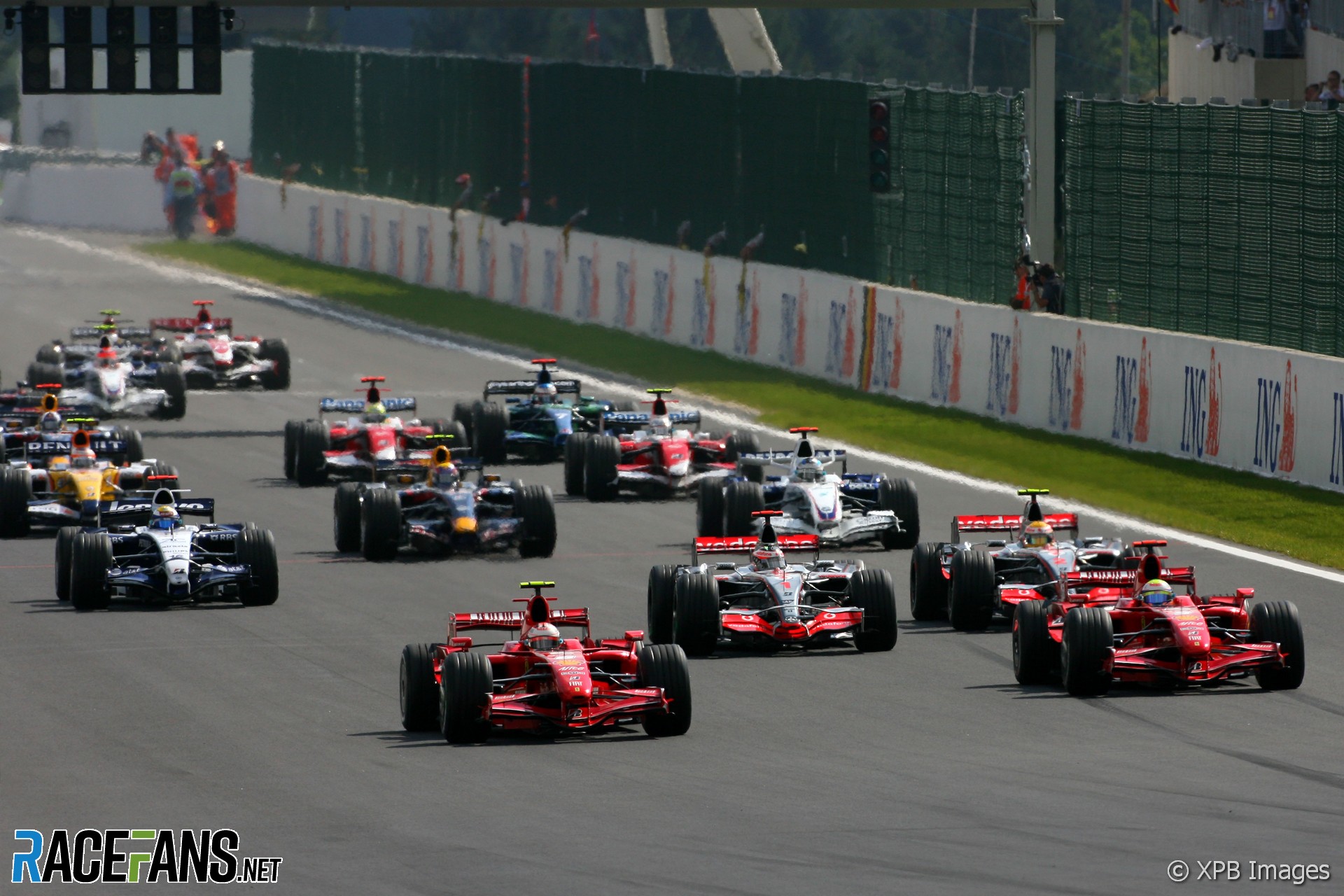 Kimi Raikkonen extended his run of Belgian Grand Prix victories to three in a row as Ferrari scored a dominant one-two.

The Italian team clinched the constructors’ championship trophy which was a formality following the damning verdict against McLaren earlier in the year.

Lewis Hamilton clings onto a slender, reduced lead in the drivers’ championship with three flyaway races left in the 2007 season.

An ominous cloud of smoke hung around Felipe Massa’s front left wheel as the cars waited to start the race – but as the car leapt forward the smoke dissipated and Massa took up position behind team mate Kimi Raikkonen.

Behind them the two McLarens kept their positions albeit with somewhat less discipline. Lewis Hamilton made a fractionally better start than Fernando Alonso but his team mate cut sharply across at the exit of La Source to push Hamilton wide.

The British driver kept his foot on the throttle and the two raced downhill together, Alonso fractionally ahead before sweeping across to command the racing line through Eau Rouge.

Behind them the rest of the field had gotten away cleanly and Heikki Kovalainen had moved up from ninth to sixth. But the Renault looked heavy with fuel and he was soon passed by Mark Webber and Nick Heidfeld.

Adrian Sutil had propelled himself up to 15th on the first lap and, with soft tyres on his Spyker, picked off a couple more cars and then took 12th of Jarno Trulli. who had started eighth.

Robert Kubica, who had started 14th after an engine penalty, also made a good start and passed Ralf Schumacher for ninth on lap six. He then caught Heikki Kovalainen and passed the Finn for eighth at the bus stop after a number of tries.

At the front of the field, however, there was very little going on. Raikkonen was leaving Massa behind, with a 5.4s lead by lap 15, who in turn had five seconds over Alonso, with Hamilton another three seconds back.

The pit stops that began on lap 16 did nothing to change the order. Raikkonen and Alonso pitted together on lap 16, Massa and Hamilton the next time around, and all kept the same order and roughly the same gaps. Hamilton cut the second part of the bus stop on his first lap out of the pits, but otherwise there was no drama.

Kubica was another of the early stoppers, in on lap 16, and Sutil pitted the next time around having been hounding David Coulthard.

Kubica was the next driver to catch Coulthard and was joined by Kovalainen, who made his single stop on lap 23 and came out behind the BMW, which had another stop to make.

Further back, Alexander Wurz was having a disastrous race. He spun at the bus stop chicane on the second lap and went wide at Les Combes on lap 25. That allowed Sakon Yamamoto through (the Super Aguri driver on the same aggressive strategy as Sutil) and left him last.

As so often this year Rosberg made an early second pit stop, relinquishing sixth place. The leaders then began their final set of pit stops, Raikkonen in first on lap 32, then Massa the next time around and Alonso on lap 34. Raikkonen’s lead was so great that he came out between Alonso and Hamilton.

Unusually Hamilton stayed out longer before his final stop, although he was seldom able to lap quicker than Alonso, who now had soft tyres on.

He finally pitted on lap 38 with seven laps remaining, and came back out over six seconds behind. On the penultimate lap he slithered wide at Pouhon, took to the tarmac run-off, and slipped further behind Alonso.

Massa banged in a new fastest lap on 35, one second faster than Raikkonen on the same lap, which sent a clear signal that the Ferraris had been given the usual order to stop racing after the second pit stop.

Spa was proving a car breaker – Coulthard pulled off at the bus stop on lap 32, six laps after his pit stop. Once again the culprit was the hydraulic system.

Wurz’s dismal race came to an end on lap 37 and so did Button’s one lap later – the Briton already facing the ignominy of being passed by his old car – Takuma Sato in the Super Aguri.

The principal battle in the dying stages was between Kovalainen and Kubica once again, Kovalainen clinging onto the final points paying position. But this time the Pole was unable to find a way past.

Raikkonen won the race in dominant fashion and only when the flag had fallen did the crowd finally get some longed-for entertainment from one of the top four drivers. While heading into the pits Raikkonen executed a quick burnout – such things are normally forbidden, the governing body would be wise to leave Raikkonen alone on the breach of protocol.

Massa was a subdued second and falls further behind Raikkonen in the championship battle.

The McLarens were third and fourth on a bitter weekend for the team, Alonso cutting Hamilton’s lead by a single point to just two with three races remaining.

Heidfeld’s second stop leapt him ahead of Rosberg, the Williams driver just under four seconds ahead of Webber. Behind the Red Bull driver Kovalainen and Kubica were nose to tail, the Renault driver snatching the final point.

After a dismal week the sport needed a classic Spa fight – a splash of rain and some good racing with a close battle for the lead. It got none of them. The top four finished in the order they started and there were only a few battles for position further down the field.

9 comments on “Raikkonen clinches hat-trick of wins at Spa”