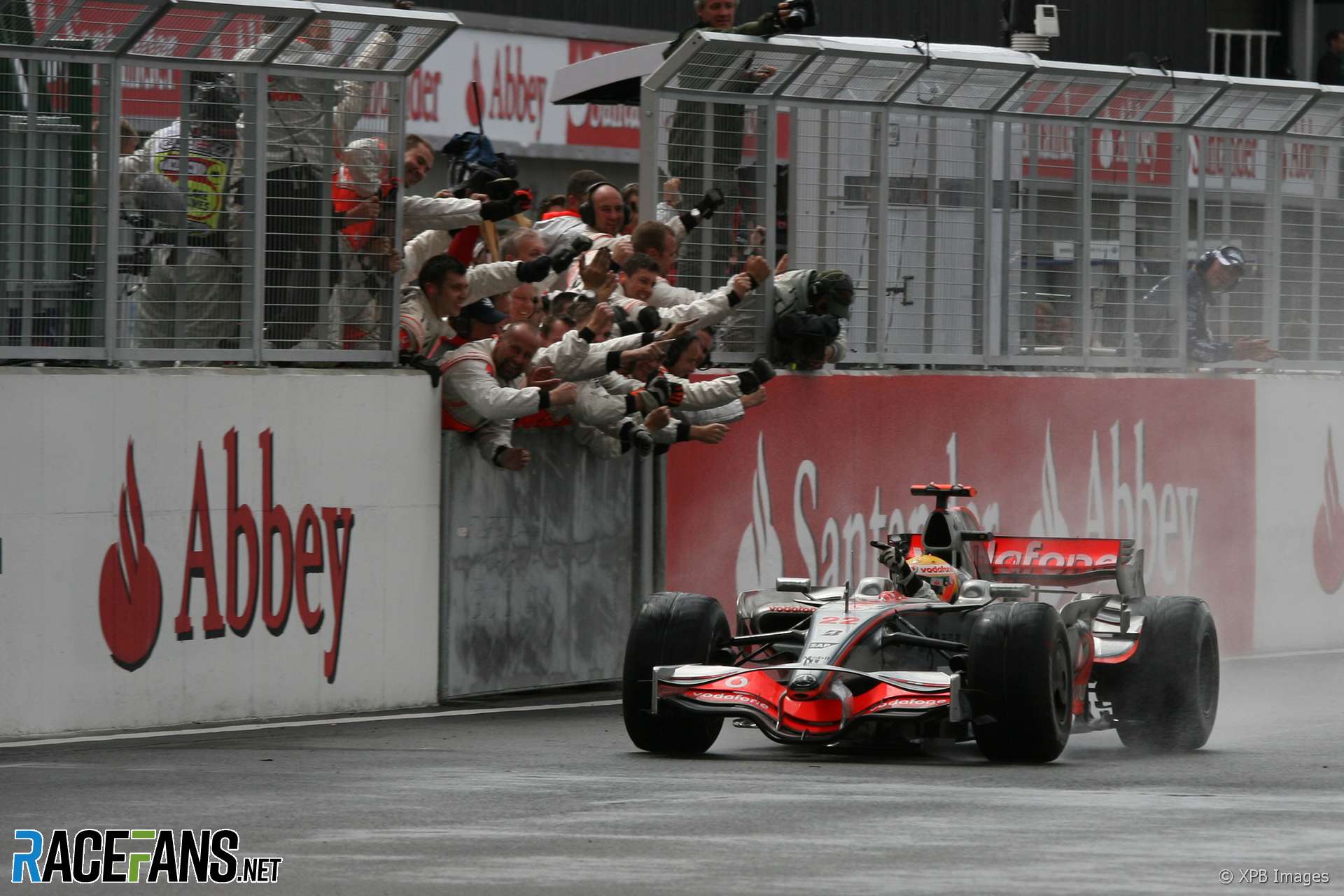 Lewis Hamilton won a thrilling British Grand Prix at Silverstone as McLaren capitalised on a strategic blunder by Ferrari.

McLaren called the changing conditions perfectly while Ferrari got their strategy badly wrong for Kimi Raikkonen, leaving him to battle his way up to fourth.

Hamilton’s win sets up a three-way tie at the top of the Formula 1 championship standings at the halfway point in the championship.

The race started in damp conditions with Heikki Kovalainen on pole position ahead of Mark Webber. But it was the second row of Raikkonen and Hamilton that made the best start. While Raikkonen was boxed in behind the front row men, Hamilton burst through to take second after banging wheels with his team mate at the first corner.

Hamilton kept up the pressure on Kovalainen and made his pass on lap four, lunging through at Stowe leaving Kovalainen unable to respond, although the Finn feinted at his team mate as they went into Vale.

Further back the opening laps were chaotic. Webber spun as he came onto the Hangar straight, keeping his Red Bull away from the cars rushing at him.

At Abbey first Kazuki Nakajima went off then Felipe Massa spun as well, this first of many for the Ferrari driver. At Priory, David Coutlhard tapped Sebastian Vettel and both spun straight into the gravel, ending their races, and Coulthard’s final home Grand Prix.

Fernando Alonso had gambled on ‘extreme’ wet weather tyres at the start and to begin with they paid off. Alhough team mate Nelson Piquet Jnr passed him at the start he quickly reversed the move and then took Nick Heidfeld for fourth. He then began to close on the top three of Hamilton, Kovalainen and Raikkonen.

But on lap 11 he found Kovalainen suddenly in front of him. The Finn had spun at Abbey, letting Raikkonen up into second.

Webber quickly began to fight his way through the pack, passing Kazuki Nakajima, Rubens Barrichello, Adrian Sutil (who’d made a characteristically good start in the wet), Rubens Barrichello and Jenson Button. But on lap 18 he had to make his first pit stop.

By this time Raikkonen had cut the gap to Hamilton from over six seconds to 1.6s. As the track continued to dry, Raikkonen had the quicker car and set the fastest lap of the race at this stage.

Kovalainen was in the pits on lap 19 for a fresh set of intermediates. As the track seemed to be getting drier, it looked like McLaren had made a mistake by not keeping him on his worn intermediates.

When Hamilton and Raikkonen came in together two laps later McLaren did the same but Ferrari left Raikkonen on the same tyres. But as rain began to fall heavily it became clear that McLaren had made the right decision. On their out lap Hamilton was 1.1s quicker in the second sector alone.

Over the following laps Hamilton streaked away. Raikkonen lost five seconds on lap 24 alone – by lap 27 he was 21.8s in arrears and Kovalainen had caught him. But Kovalainen took a long time to pass his countryman and, when he finally did, a perfectly-placed Heidfeld pounced on the pair of them, and took both drivers in one move at Woodcote.

By the halfway stage in the race rain was falling very heavily and it was starting to look as though extreme wet weather tyres would be necessary. Raikkonen finally gave up and pitted for fresh intermediate tyres on lap 30. Fernando Alonso was also in trouble having pitted and kept the same tyres on lap 21. He was back in on lap 27 and took on enough fuel to last him until the end.

Robert Kubica was thriving in the rain, passing Piquet for fourth on lap 32 and then taking Kovalainen two laps later, putting him third.

The Honda drivers had capitalised on the leaders’ problems and on lap 36 Rubens Barrichello was into the pits. The team gambled on switching him to extreme wet weather tyres, but a problem with the fuel hose kept him stuck in the pits and not taking on any fuel. Worse, team mate Jenson Button was queued behind him. A few laps later Button retired with a technical problem.

But as the weather got worse more drivers were flying off the track. Giancarlo Fisichella had spun out on lap 27. Nelson Piquet Jnr, having passed Alonso earlier, went out on lap 36. Timo Glock spun and continued and up ahead even Hamilton went wide at Abbey. At Becketts first Kubica went off and then Massa had another spin, the car snapping away from him as he turned into Maggots. Both continued.

McLaren faced another strategy gamble when Hamilton came in for his second pit stop on lap 38. And again it looked as though they’d called it wrong as they elected not to put him on extreme wet weather tyres, but gave him new intermediates instead.

Surprisingly BMW did the same but Barrichello was able to lap up to five seconds per lap quicker than them. He even unlapped himself from Hamilton with ease going down the Hangar straight. But as the rain eased over the coming laps Hamilton was able to improve his lap times much more quickly than the opposition – up to four seconds faster than the likes of his team mate and Raikkonen.

Kubica was caught out by the weather, however, and went off backwards into the gravel on lap 40.

Nakajima loses out at the last

After Barrichello made his final stop he slotted in third behind Heidfeld, with Jarno Trulli, Alonso, Kovalainen, Raikkonen and Timo Glock, whose Toyota had survived an assault from Nico Rosberg, who lost his front wing in the contact.

Massa was stil struggling and on lap 50 spun for the fifth time. Kovalainen had another spin, allowing Raikkonen and Alonso past.

Raikkonen then reeled in Alonso and passed him or fourth, Kovalainen following to demote the Renault driver to sixth. But Kazuki Nakajima could not find a way past Alonso – but Trulli pounced to demote the Williams driver almost within sight of the chequered flag.

Rosberg finished ninth after stopping for a new front wing with Webber a disappointing tenth after starting on the front row of the grid. He spun more than once during his attempts to climb back through the field.

Sebastien Bourdais was 11th ahead of Timo Glock and Massa, after a poor performance by the Ferrari driver.

Hamilton’s win was the perfect response to growing criticism of his driving after the mistakes at Montreal, Magny-Cours and in qualifying at Silverstone yesterday. But for all the drama of the previous races it is now all tied at the top of the championship with eight races to go.