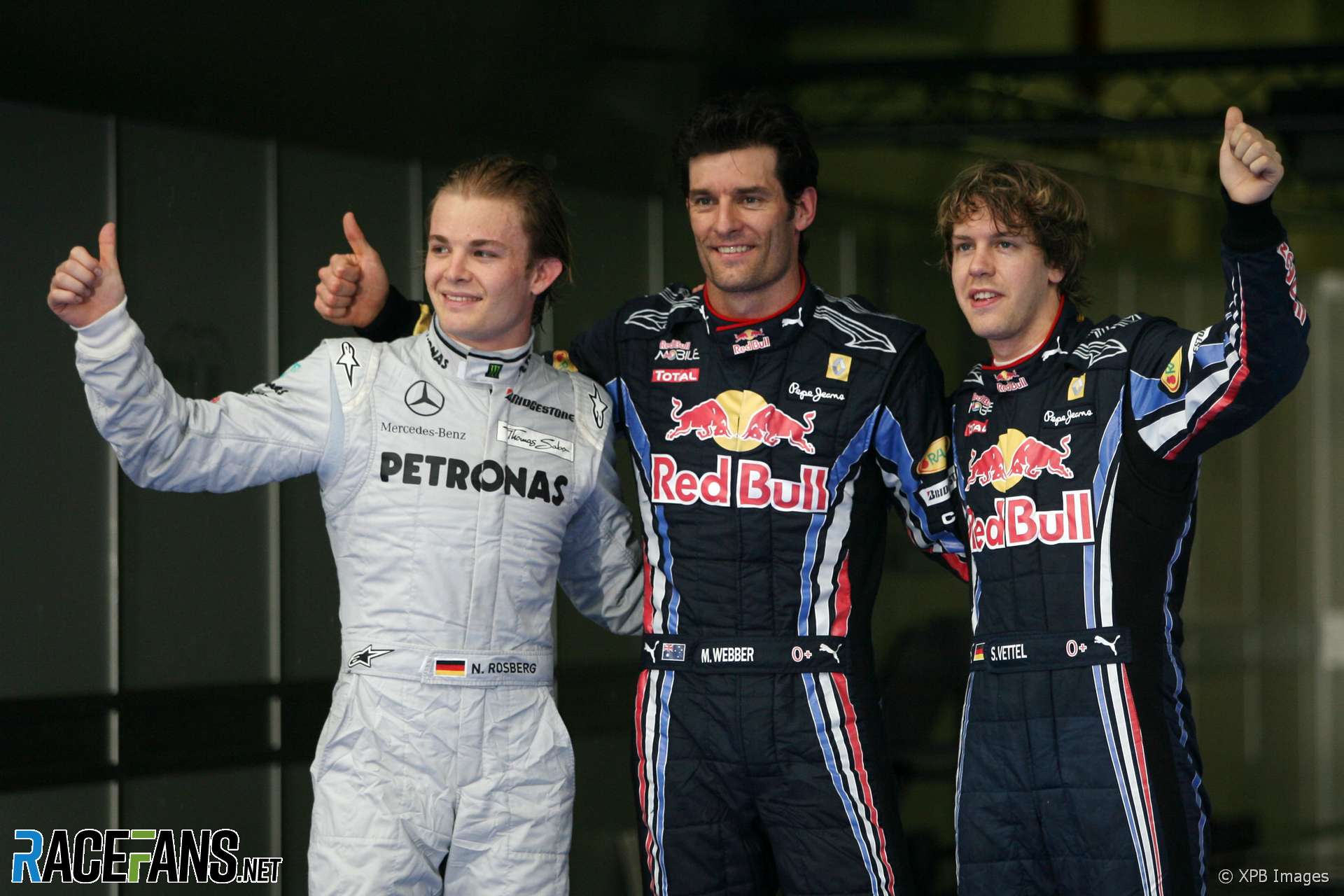 A brilliant gamble by Mark Webber put him on pole position for the Malaysian Grand Prix after a wet qualifying session in Sepang.

But several other big names called the conditions completely wrong – both Ferraris and Lewis Hamilton’s McLaren will start the race from the back three rows of the grid.

The teams had expected rain to coincide with qualifying and, sure enough, the clouds opened minutes before the start of Q1.

Fifteen cars headed out of the pit lane at once as Q1 begun, including Sebastian Vettel, though most of the top teams’ drivers stayed dry in the garages.

But this proved their undoing when a second, unexpected belt of rain dropped more water on the track. The circuit had only been half-wet at best but now required full wet tyres.

This caught out several drivers. Lewis Hamilton spun at the last corner on his first lap on intermediate tyres and by the time he came around again the track was so wet he needed full wet tyres.

Jenson Button made it into Q2 with his first lap but the deeper water caught him out at turn six the next time around and he spun into the gravel trap. Vitaly Petrov followed him off, but while the Renault driver kept going Button was stuck.

Nor did either of the Ferrari drivers make it out soon enough. Fernando Alonso and Hamilton traded times at the end of the session, Alonso spinning at turn eight on one lap. They lapped within six thousandths of a second of each other on the quickly-drying track – but neither were able to make the cut for the top 17, and nor could Felipe Massa.

If the big teams had no excuse for missing the best opportunity to set a fast lap at the beginning of the session, at least Lucas di Grassi did – he’d been stuck in the pits with over-running repairs from first practice.

Also out were Bruno Senna, who spun during the early running, team mate Karun Chandhok and Lotus’s Jarno Trulli.

But the new teams had seized their opportunity – Timo Glock’s Virgin and the Lotus of Heikki Kovalainen made it into Q2.

After Q1 the teams weren’t getting caught out again – Robert Kubica led all 15 runners (minus Button’s McLaren) onto the track.

Most of the cars began the session on intermediates but a notable exception were Red Bull, who sent their drivers out on full wets to begin with, before switching over to intermediates.

But Michael Schumacher almost fell victim to Pedro de la Rosa’s Sauber and only made it into the top ten by three-tenths of a second.

Heikki Kovalainen won the battle of the new teams, edging Timo Glock who spun early on in the session, but both were eliminated.

The rain return with a vengeance at the beginning of Q3. Not wanting to get held up by the other cars, Robert Kubica cheekily drove past the queue at the exit of the pit lane and led them out onto the track.

But with conditions similar to those which brought last year’s race to a halt, the session was red-flagged as the cars were halfway around their first lap.

After a 20-minute delay the session resumed with the Force Indias, wise to Kubica’s tactics, side-by-side at the pit lane exit.

That guaranteed them a clear view of the track ahead but the truly smart gamble came from Mark Webber, who started the session on intermediate tyres. It was a risky decision and when he came round after the first lap in ninth place it looked like it hadn’t paid off.

But with little further rain falling the track came to Webber. His second lap was quickest of all and his final effort put him 1.3 seconds faster than every other car.

Nico Rosberg grabbed second place on the grid, pushing Sebastian Vettel off the front row for the first time this year.

Adrian Sutil joins Vettel on the second row ahead of Nico Hulkenberg’s Williams.