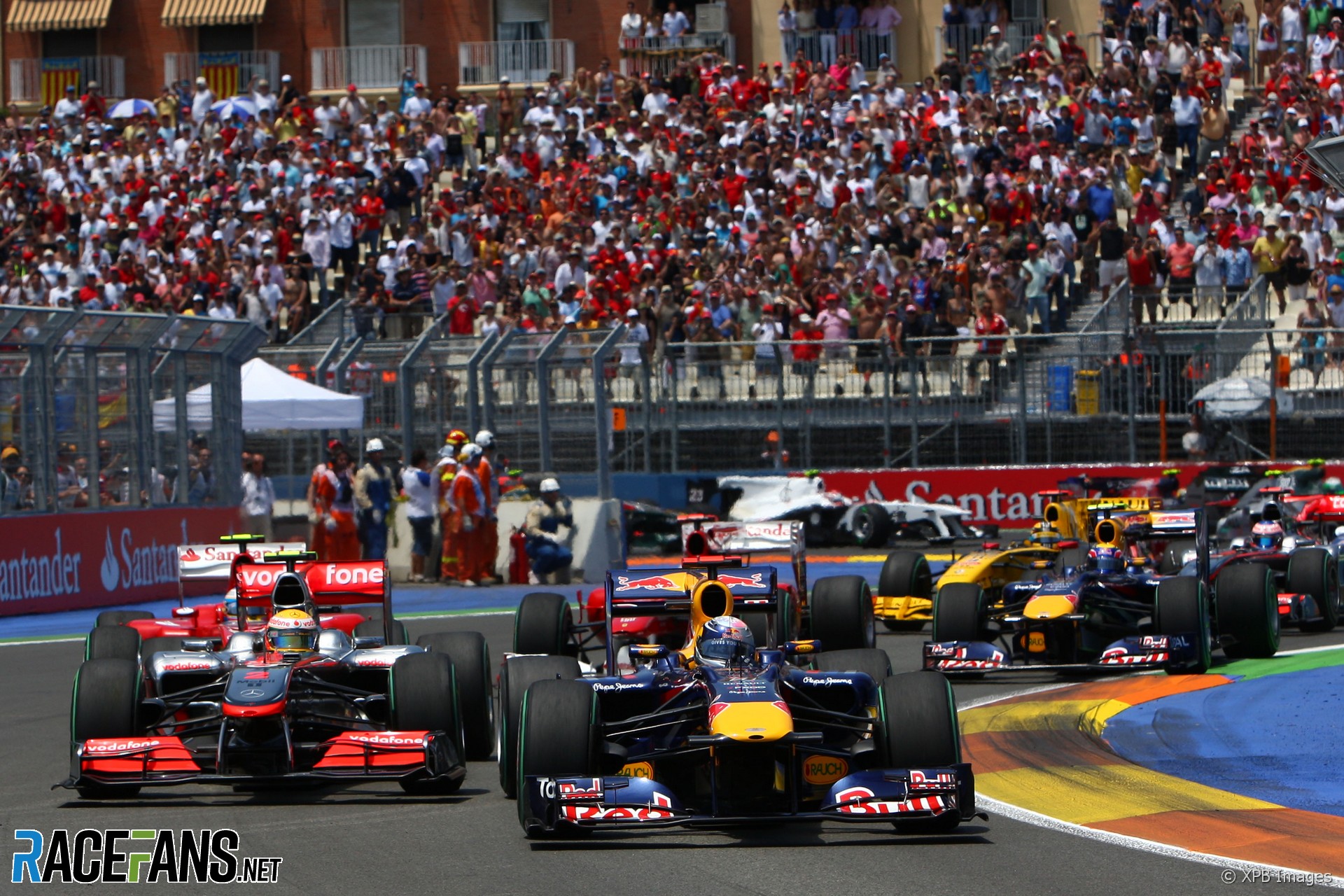 Sebastian Vettel scored his second win of 2010 in the European Grand Prix.

Vettel was chased home by the two McLarens, Lewis Hamilton delayed by a drive-through penalty and Jenson Button spending much of the race behind Kamui Kobayashi.

The outcome of the race was decided by a safety car period following a violent crash for Vettel’s team mate Mark Webber.

Webber had fallen from second to ninth on the first lap as Hamilton, Fernando Alonso and a string of others passed him.

Webber made an early pit stop but a slow front-left wheel change meant he fell behind Heikki Kovalainen’s Lotus. The pair collided on lap 14, Webber flipping through the air (see separate story).

The safety car came out behind Vettel, in front of Alonso – and more or less alongside Hamilton. This seemed to confuse the McLaren driver who, after appearing to hesitate, passed the safety car before the first corner. But replays shown he had been behind the safety car at the line.

Meanwhile the other cars had to queue up behind the safety car which, for some of them, ruined their races. Chief among them were Ferrari, who had to make Felipe Massa wait behind Alonso for his pit stop.

The field pitted together behind the safety car. Vettel and Hamilton held their positions but Kamui Kobayashi appeared in third place, having started on the medium tyres and not pitted. He was about to become a thorn in the side of Button – and the saviour of Hamilton’s race.

By the time Hamilton got his penalty Kobayashi and Button had dropped so far behind that McLaren were able to bring Hamilton in for his drive-though without losing his position to the Sauber driver.

Kobayashi left his pit stop to make his mandatory change to super-soft tyres until there were just three laps to go. He came out behind Alonso and Sebastien Buemi, who were disputing seventh.

With the benefit of fresh tyres Kobayashi disposed of both of them in the final two laps. He dived down the inside of Alonso at turn 17 on the penultimate tour, then got Buemi for seventh at the last corner of the last lap.

Ahead of him Vettel took the chequered flag to win and move up to third in the drivers’ championship. Hamilton, second for the third year in a row at Valencia, keeps the lead in the championship ahead of Button, who finished third.

Rubens Barrichello finished an excellent fourth for Williams – though a double points finish was in the offing until Nico Hulkenberg parked up with eight laps to go.

Robert Kubica brought his Renault home fifth and Adrian Sutil was sixth for Force India, thanks to an earlier pass on Buemi.

The final point went to Pedro de la Rosa, ahead of Vitaly Petrov and Nico Rosberg.

Felipe Massa was 14th behind Vitantonio Liuzzi, ahead of Jaime Alguersuari and Michael Schumacher, the latter making three pit stops during the race.

First among the new teams was Lucas di Grassi, who swapped places with team mate Timo Glock early on in the race.

Glock later collided with Bruno Senna while Kobayashi and Button came up to lap them. Glock recovered to finish behind his team mate.

Last of the finishers were Karun Chandhok, Senna and Jarno Trulli.

But many of these positions could change as the stewards are investigating nine drivers for their speed behind the safety car.