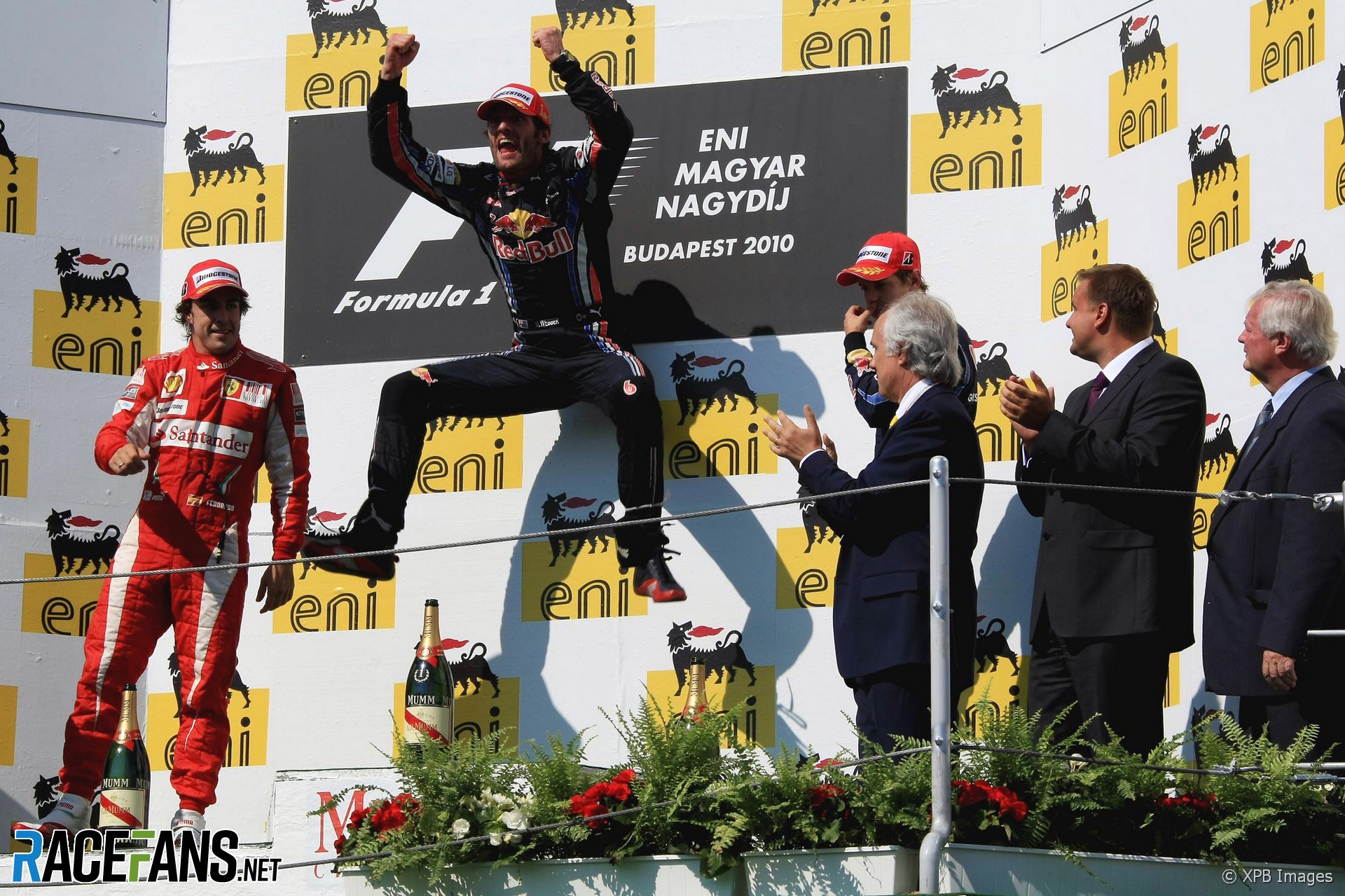 Mark Webber scored his fourth win of 2010 in the Hungarian Grand Prix.

He hit the front by staying out of the pits during an early safety car period, then built up enough of a gap to keep his lead ahead of Fernando Alonso and Sebastian Vettel.

His team mate was delayed by a drive-through penalty for failing to stay close enough to Webber behind the safety car.

There was much attention on Vettel at the start after his poor getaways in recent races. But he held first place this time and Alonso followed him through into second ahead of Webber.

With Alonso keeping Webber behind, Vettel stretched his lead very quickly, leaving them behind at the rate of a second a lap.

The safety car came out after Vitantonio Liuzzi lost part of his front wing and almost every car came into the pits at once. Webber was a significant exception, Red Bull gambling on him being able to build up enough of a gap over Alonso once the race had resumed to leapfrog the Ferrari.

But the busy pit lane had dangerous consequences. Nico Rosberg’s Mercedes shed its right-rear wheel, flinging it towards dozens of mechanics. It struck one Williams mechanic, but mercifully his injuries were light.

There was more chaos. Renault released Robert Kubica out of his pit box as Adrian Sutil ahead was swinging in to his.

The pair collided, putting Sutil out of the race, and Kubica retired later following a stop-go penalty. The stewards will investigate the incident further.

It was at the restart of the race where it all went wrong for Vettel. He allowed Webber to get too far ahead and the stewards later hit him with a drive-through penalty.

By the time he served his penalty he had built up enough of a gap to only lose one place to Alonso – though he also lost the opportunity to inherit his lead back from Webber.

A furious Vettel spent the rest of the race trying to get close enough to Alonso to make a move. His best opportunity came after the two split the Lotus drivers, allowing Vettel to get within half a second of his rival. But he ran wide at turn four and the moment was lost.

Felipe Massa had a quiet race to fourth. He moved up to the place when Lewis Hamilton retired early in the race with a loss of drive.

Hamilton had fallen behind Vitaly Petrov at the start but re-passed the Renault driver on the outside of turn two. He then took fourth off Massa during the pits before his car failed.

Petrov claimed fifth ahead of Hulkenberg – the last car not to be lapped by the flying Webber.

Jenson Button made a poor start from 11th place and fell as low as 15th. He managed to take one pace off Vitantonio Liuzzi and gained a few more places through the pit stops.

But he ended the races sandwiched between the Saubers and unable to pass Pedro de la Rosa. Kamui Kobayashi finished an impressive ninth having started on the back row.

Rubens Barrichello claimed the final point for tenth place and had to fight hard for it in a terrifyingly close encounter with Michael Schumacher – another matter the stewards are attending to.

All six of the new teams’ cars finished the race, with Heikki Kovalainen leading them in 14th behind Sebastien Buemi and Liuzzi.

Red Bull may have once again failed to convert a front row start into a one-two finish but they took enough points to claim the lead of the constructors’ championship and put Webber back ahead in the drivers’ title race. Food for thought for their rivals as they head into the summer break.