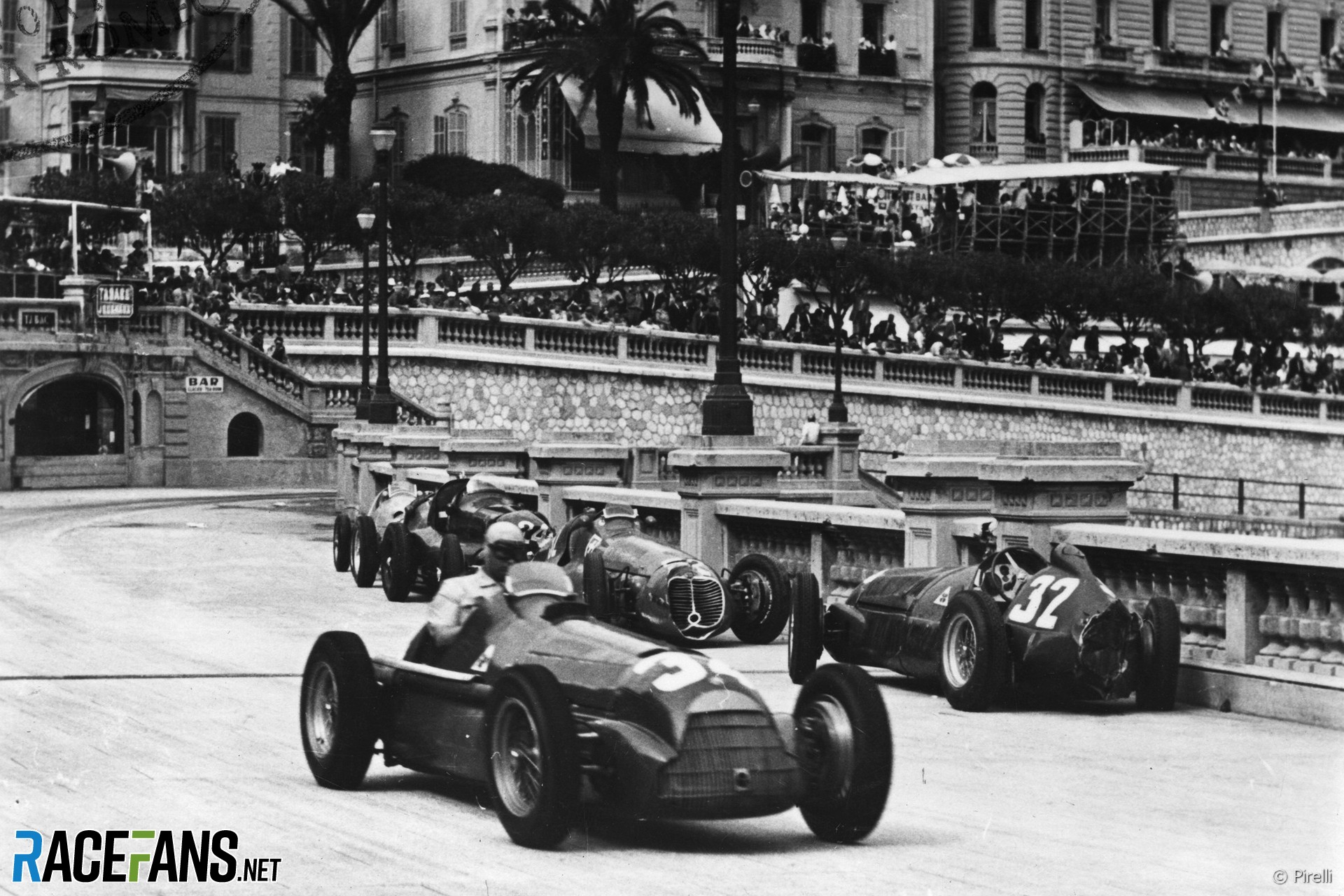 An F1 standing start is one of the great spectacles in sport. But it doesn’t always go according to plan as guest writer Greg Morland explains.

First lap collisions are an occupational hazard for F1 drivers. Keeping a cool head and staying out of trouble during the hustle and bustle of the opening lap is an essential skill that all successful drivers must possess.

When it all goes wrong, it goes wrong in a big way – as you can see in this selection of ten of the most spectacular first lap pile-ups.

In the heat of the moment even the greatest racers have failed to temper ambition with pragmatism, and race after race drivers charge into the first corner with disregard to their cold tyres and brakes. Barely a race goes by without some form of contact between cars on the first tour of the circuit.

Usually, damage sustained in these accidents is minimal – a punctured tyre here, a broken front wing there. But in the very worst cases drivers have lost their lives in a first-lap melee and for obvious reasons those sad tales are not recounted below.

The 2002 Formula 1 season began with a bang. Ralf Schumacher, who had started brilliantly from third on the grid, was caught out by the early braking of pole sitter Rubens Barrichello on the approach to turn one and was launched over the Ferrari into the air. Both were out on the spot.

Behind them, chaos broke out. Nick Heidfeld lost control of his Sauber and veered across the grass across the inside of the first corner straight into the middle of the pack.

The instant elimination of more than a third of the 22 starters led to a fairytale debut for Mark Webber. Racing for perennial backmarkers Minardi he held off a late attack from Mika Salo to secure a famous fifth place in front of his home crowd.

Spa Francorchamps has seen its fair share of accidents since it was created 90 years ago, but few could match the sheer scale of the infamous first lap pile up of 1998.

The race began in the type of biblical deluge which regularly affects the Belgian Grand Prix. But race control called for a normal standing start instead of commencing the race behind the safety car.

Initially, all went well, as all 22 cars negotiated the tight La Source corner successfully. But on the run down the hill towards Eau Rouge, all hell broke loose. David Coulthard’s McLaren snapped sideays into a barrier.

On the narrow track, shrouded by a wall of spray, the consequences were inevitable – all but a lucky handful of drivers behind Coulthard escaped from the clutches of the multicoloured mass of carbon fibre sliding down the hill.

Tyrrell duo Jean-Pierre Jarier and Derek Daly qualified ninth and 12th at Monaco in 1980. Team boss Ken Tyrrell, well aware of Monaco’s perils, warned both to take it easy at the start.

Daly should have paid closer attention to his boss’s words for, as the pack headed towards the first corner, he was caught out by how quickly those in front of him braked.

He piled into Bruno Giacomelli’s Alfa Romeo, flipped through the air, and landed on his team mate, ending both their races. Making matters worse, FIA president Jean-Marie Balestre was standing on the inside of the corner, and launched into a tirade against the driver.

Daly found few comforting words from Tyrrell after he slunk back to the pits, so he began the lonely walk back to his Monaco apartment. He stopped at a Ferrari dealership on the way and bought a Dino 246 to cheer himself up. How F1 is that?

The Monte Carlo street circuit was the scene of one of the most bizarre pile ups in F1 history. In the 1950 race, which was the second world championship Grand Prix, ten of the 19 starters were eliminated from the race on the opening lap.

What triggered the mass carnage was a wave in the harbour which crashed over the sea wall and flooded the circuit at the Tabac corner. Fortunately, despite the fragile nature of 1950s racing cars, no drivers were injured.

Among the drivers who crashed out were Giuseppe Farina, who went on to become the inaugural world champion. Jose Froilan Gonzalez, the man who scored Ferrari’s F1 victory, was also eliminated.

One of the drivers who escaped was pole-sitter Juan Manuel Fangio, who went on to win the race. He made his way through the melee by leaning out of his car to push the wreckage out of his way

One of the most infamous pile ups in F1 history occurred at Woodcote corner during the 1973 British Grand Prix at Silverstone.

This was before the passage through Woodcote had been slowed by chicanes or Luffield corner. It was a fast and difficult right hander rather than the flat out curve it is today. Running in fourth place at the end of the opening lap was 23 year-old Jody Scheckter, racing in the fourth Grand Prix of his career.

Heading out of Woodcote onto the pit straight, Scheckter put a wheel on the grass and lost control of his McLaren, eventually spinning to a halt some way up the road with his car blocking half of the track. With most of the field behind the incident and approaching the scene at speed, the consequences were inevitable.

Eight further drivers were caught up in the ensuing carnage, one of whom – Italian Andrea de Adamich – suffered a broken ankle. Scheckter himself escaped from the accident unscathed, despite being collected by several cars at high speed.

The worst crashes at the start are usually caused by someone failing to get on the brakes soon enough for the first corner. At Paul Ricard in 1989 Mauricio Gugelmin took a wild ride through the air after doing just that.

He hit Thierry Boutsen’s Williams, took off, plucked the rear wing from Nigel Mansell’s Ferrari and skidded to a halt in the run-off area.

There were no injuries but, this being before the safety car was widely used, the race was red-flagged. Every driver took the restart including Gugelmin, who set the fastest lap of the race.

But the crash may have had an indirect effect on the world championship. The differential on Ayrton Senna’s McLaren couldn’t cope with a second start and he retired as the cars pulled away from the grid.

The 1987 Austrian Grand Prix at the Osterreichring is unusual in that it was restarted twice due to first lap collisions, both partly due to the difficulty of starting a race on the track’s narrow grid.

The first accident occurred on the run up the hill towards the Hella Licht chicane, as Martin Brundle suddenly veered left into the barrier before rebounding back onto the track. Several more cars spun off while attempting to avoid him, blocking the circuit and bringing out the red flags.

The second pile-up was far worse. Starting from second place on the grid, Nigel Mansell crawled off the line, bunching the field behind him on the narrow track. Many drivers were forced to slow dramatically to avoid the stricken Williams, but with some cars arriving at the scene at considerable speed a collision was unavoidable.

Unsighted cars from the back of the grid began to pile into the backlog. Within a matter of seconds of the start, 11 cars were out, and the circuit was blocked again.

The two accidents highlighted the shortcomings of the Osterreichring for F1 cars of the time. The circuit was dropped from the F1 calendar at the end of the season, and it was not until 1997 that Grand Prix racing returned to the circuit, albeit on a shortened and slower layout which also featured a wider pit straight.

In its 32-year history, the Circuit Gilles Villeneuve in Montreal has developed a reputation for causing chaotic races. The 1998 Grand Prix was no exception. The race saw numerous accidents and overtakes, four safety cars and even a long overdue penalty for reckless driving for Michael Schumacher.

But many fans will remember the race for one thing – the sight of Alexander Wurz barrel-rolling into the gravel trap at the first corner of the race.

The Austrian started well from 11th, but tried too hard to squeeze down the inside of Jean Alesi and ended up on the grass. Their wheels connected and Wurz was flipped upside down, taking Johnny Herbert and Jarno Trulli with him.

Fortunately for these four, the race was red-flagged and all four were able to take the restart in their spare or repaired cars. Incredibly, Wurz, Alesi and Trulli tangled again at the second start.

This time Wurz edged Trulli into the path of Alesi at Turn 2, causing him to park his car on top of the Sauber. Despite all this, Wurz went on to finish an excellent fourth place.

After the disaster that was the six-car 2005 United States Grand Prix, the onus was on Formula 1 to put on a good show at Indianapolis the following season. The elimination of more than a third of the field in two separate first lap accidents was hardly a ideal start.

At the back of the field, Mark Webber, Franck Montagny and Christian Klien retired after the latter clipped Webber’s rear wheel going into Turn 1. He spun into the path of the oncoming pack and almost tipped Webber’s Williams.

Yet this incident appeared tame in comparison to the shenanigans just up the road at Turn 2, as Juan Pablo Montoya unwittingly set off a devastating chain reaction.

Montoya, racing in what we later learned was his final Grand Prix, ran into the back of his McLaren team mate Kimi Raikkonen at Turn 2. The contact pushed him across the track into the path of Jenson Button, who was then nudged into the side of Nick Heidfeld, flinging the BMW up and into a terrifying barrel roll across the gravel trap.

Fortunately no-one was hurt, and the spectators were at least left with a slightly less depleted field than the one they’d seen the year before.

The first lap madness of 1994 German Grand Prix was just another chapter in a chaotic season. Of the 26 cars which entered the race, ten had fallen by the wayside within seconds of the start.

The first accident began almost immediately after the lights went out. Andrea de Cesaris – living up to his nickname ‘de Crasheris’ – drove straight from his starting position into the path of Alex Zanardi, causing chaos at the back.

Nearer the front David Coulthard and Mika Hakkinen made contact sending Hakkinen spearing across the track and into a heavy collision with the tyre wall. Several more drivers collided while trying to avoid the out-of-control McLaren.

The high rate of attrition produced one of the most surprising results of the modern era. Ferrari ended their four year win drought, both Ligiers reached the podium, and Footwork and Larousse scored rare points. For a fleeting few moments Ukyo Katayama even managed to run in second position for Tyrell!

The authorities came down hard on Hakkinen, banning him for one race after the collision. He had already been under a suspended ban following a collision with Barrichello at Silverstone.

Which other pile ups have rivalled the ten above? Are there any from other series which deserve a mention? Let us know in the comments.