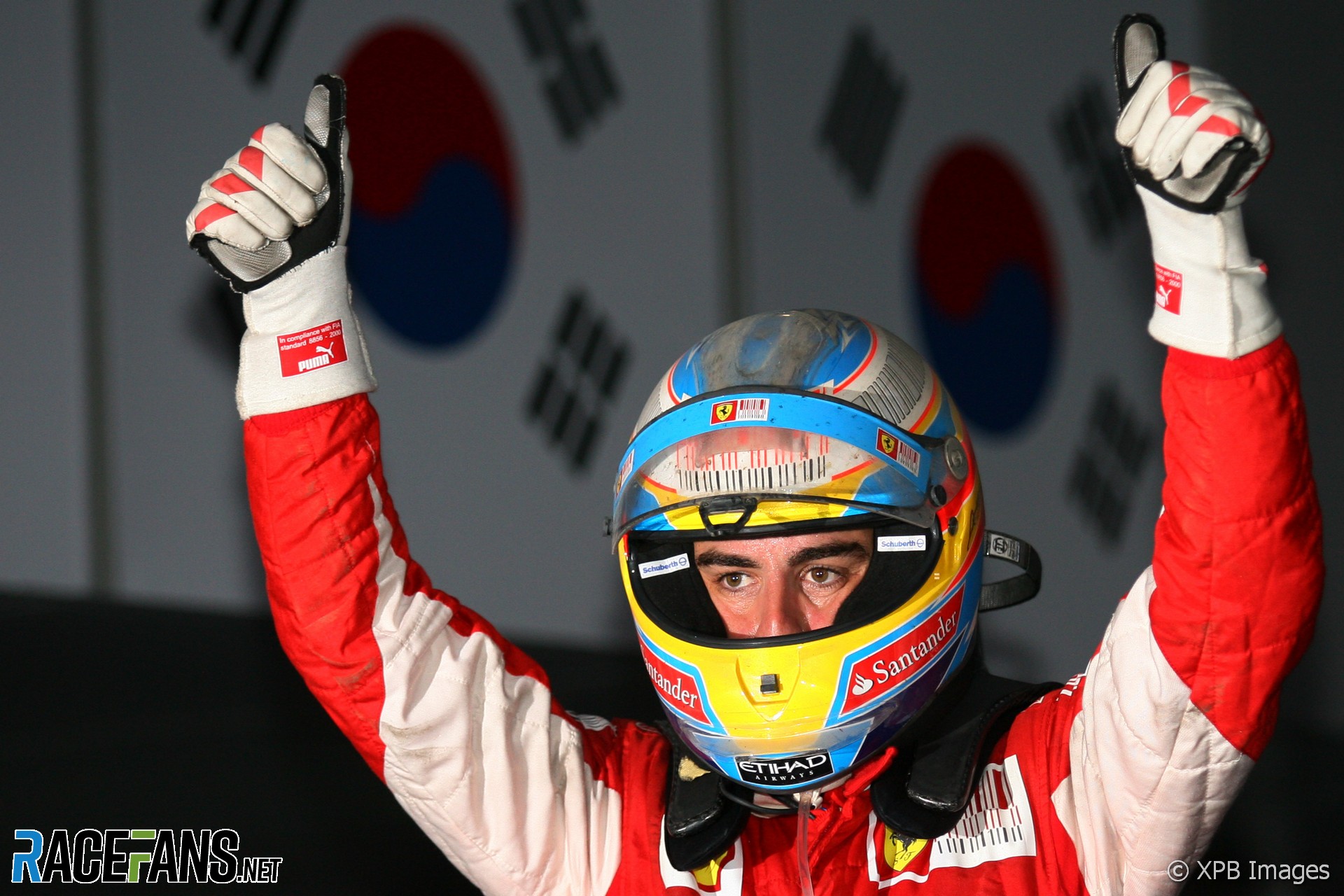 But he was helped by Sebastian Vettel suffering another car failure late in the race.

Lewis Hamilton finished second but let a chance for victory slip through his fingers by going off the track after the third and final restart.

Heavy rain in the lead-up to the race meant the start was delayed by over an hour. This led to a minor war of words conducted over the team radios between drivers urging a start to the race – mainly Hamilton – and those who opposed it – including the Red Bull drivers, Alonso and Robert Kubica.

The safety car finally peeled off after 17 laps, leaving the Red Bulls at the front of the pack, Vettel leading Mark Webber and Alonso.

Having lobbied for an earlier start to the race Hamilton didn’t get away well at the restart and was quickly passed by Nico Rosberg.

That proved to be a blessing in disguise, for after just two laps of green flag running the championship leader Mark Webber astonishingly lost control of his car at turn 14. His RB6 swung back across the track and harpooned Rosberg.

That brought the safety car out once more, with Alonso now up to second behind Vettel, and Hamilton up to third. Their team mates were behind them, Felipe Massa ahead of Jenson Button, but after the next restart Michael Schumacher neatly lined up Button for a pass.

That included team mate Hamilton, who made it into the pits at short notice first while Vettel and Alonso were already heading past the pit lane.

The safety car allowed Vettel and Alonso past quickly – avoiding a repeat of Valencia – but a slow pit stop for Alonso allowed Hamilton into second.

He didn’t hold the place for long. Before the safety car came in he warned him team he was concerned about grip and at the restart he ran wide at the first corner. That allowed Alonso past, leaving Hamilton defending from Massa.

The top three continued in that order, Vettel pulling away to begin with, then Hamilton catching them back up again. A three-way battle was developing for the lead – but suddenly it was extinguished.

Coming past the pits Vettel slowed and Alonso dived past at turn one. The RB6 came to a stop on the approach to turn three and for the second time in 2010 Vettel had been robbed of a likely win by a car failure.

In the closing stages of the race tyre wear came into play. Alonso seemed to have looked after his tyres beautifully and by the end of the race was up to four seconds per laps faster than the cars behind.

He tiptoed around the final lap to win the inaugural Korean Grand Prix and claim a priceless 25 points on a day when both Red Bull drivers failed to score.

Hamilton salvaged second, and perhaps his only consolation for going off after the final safety car period was that Alonso would probably have passed him anyway.

Massa took third after a quiet race, although he came close to spinning off at the same place as Webber. Schumacher matched his best finish of the year with fourth.

Kubica nicked fifth of Rubens Barrichello in the closing stages, and Vitantonio Liuzzi followed him through for an excellent sixth.

Kamui Kobayashi was fortunate to finish eighth after being hit by Adrian Sutil.

The final point went to Nico Hulkenberg despite a late pit stop for more intermediate tyres after going off.

Jaime Alguersuari was 11th ahead of Button, whose championship chances are in tatters are failing to score. He was another victim of Sutil, who bundled him off the track at turn five. The Force India driver later made race-ending contact with Kobayashi. The last runners were Heikki Kovalainen and the two HRTs, Bruno Senna ahead of Sakon Yamamoto.

Vitaly Petrov also crashed out of the race, spinning into the barriers at the final corner. Yellow flags remained at the spot for several laps but race control avoided sending the Safety Car out again.

If they had the race certainly wouldn’t have gone the distance. Darkness had fallen and there were only a few minutes left on the clock when Alonso finished the 55th lap of a race that lasted over two and three-quarter hours.