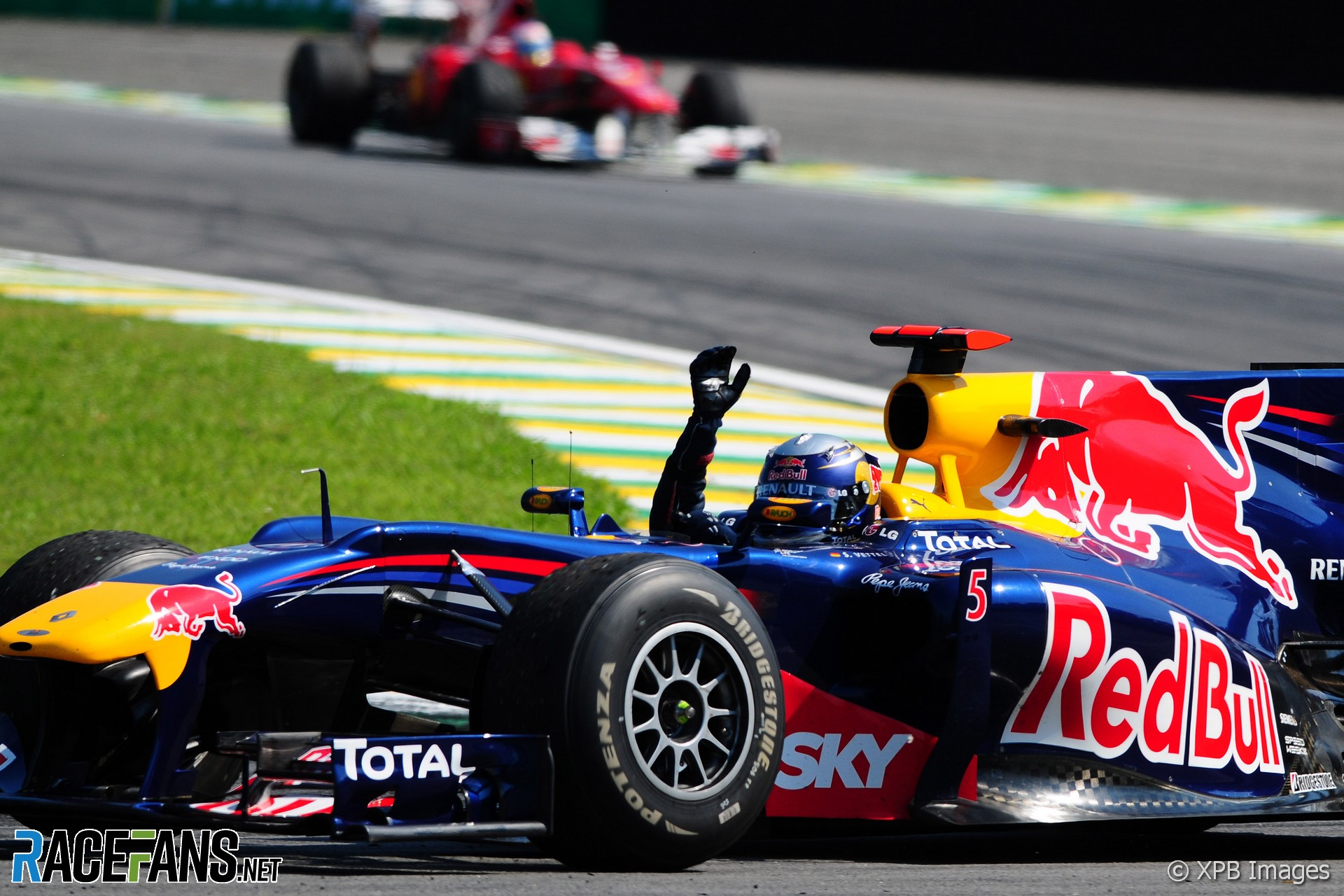 He took the lead from pole sitter Nico Hulkenberg and never looked challenged.

Team mate Mark Webber took second from Hulkenberg at the start and followed Vettel home in that position.

Webber briefly caught Vettel during the middle of the race but lost ground when the pair hit traffic. He revealed after the race that he’d had problems with high engine temperatures.

Next up to try a pass was Lewis Hamilton, who’d run wide on lap two allowing Alonso past. He wasn’t able to get by Hulkenberg and only moved ahead when the Williams pitted on lap 13.

Jenson Button was the first of the front runners to pit after being passed by Michael Schumacher early on. This worked out brilliantly for him, eventually promoting him to fifth place having started 11th.

First to react to Button’s pit stop was Felipe Massa who came out behind the McLaren. It got worse for the Ferrari driver, who had to come in on the next lap due to a problem with his front-right wheel.

Button made quick progress past Vitaly Petrov, who he passed around the outside, and in short order McLaren had to bring his team mate into the pits to make sure he didn’t drop behind Button at his pit stop.

The Red Bulls and Alonso could afford to leave their stops until later as they were under no threat from the cars behind.

Hamilton came out of the pits behind Kamui Kobayashi but he was able to pass the Sauber driver with little difficulty and so did Button shortly afterwards.

There seemed to be little chance of any change among the top five until the safety car came out on lap 50 after Vitantonio Liuzzi crashed at the Senna S.

McLaren took the gamble to bring their cars in for an extra pit stop under the cover of the safety, while keeping their fourth and fifth places.

Nor did Red Bull make an enforced change of position between their drivers – even though it would have brought Webber within one point of Alonso in the championship instead of seven.

Kobayashi made a terrific re-start and passed Sebastien Buemi to take what would become the final point.

But Massa ran into trouble when he tried to pass Buemi having already picked off Adrian Sutil and Nick Heidfeld. The pair banged wheels and Massa took to the run-off area, falling back down the order again. He finished 15th.

Ahead of him at the chequered flag was another Sao Paulo local who endured a tough race: Rubens Barrichello, who picked up a puncture after contact early on.

Victory for Vettel means he’s 15 points behind Alonso heading into the final race. The body language between him and Webber was decidedly cool on the podium, Webber no doubt thinking back to his earlier words that the team were “emotionally behind” Vettel.

But in the Red Bull garage the celebrations were beginning as the 2010 constructors’ championship is their. We’ll find out in one week’s time in Abu Dhabi whether either of their drivers can lift the drivers’ title this weekend.