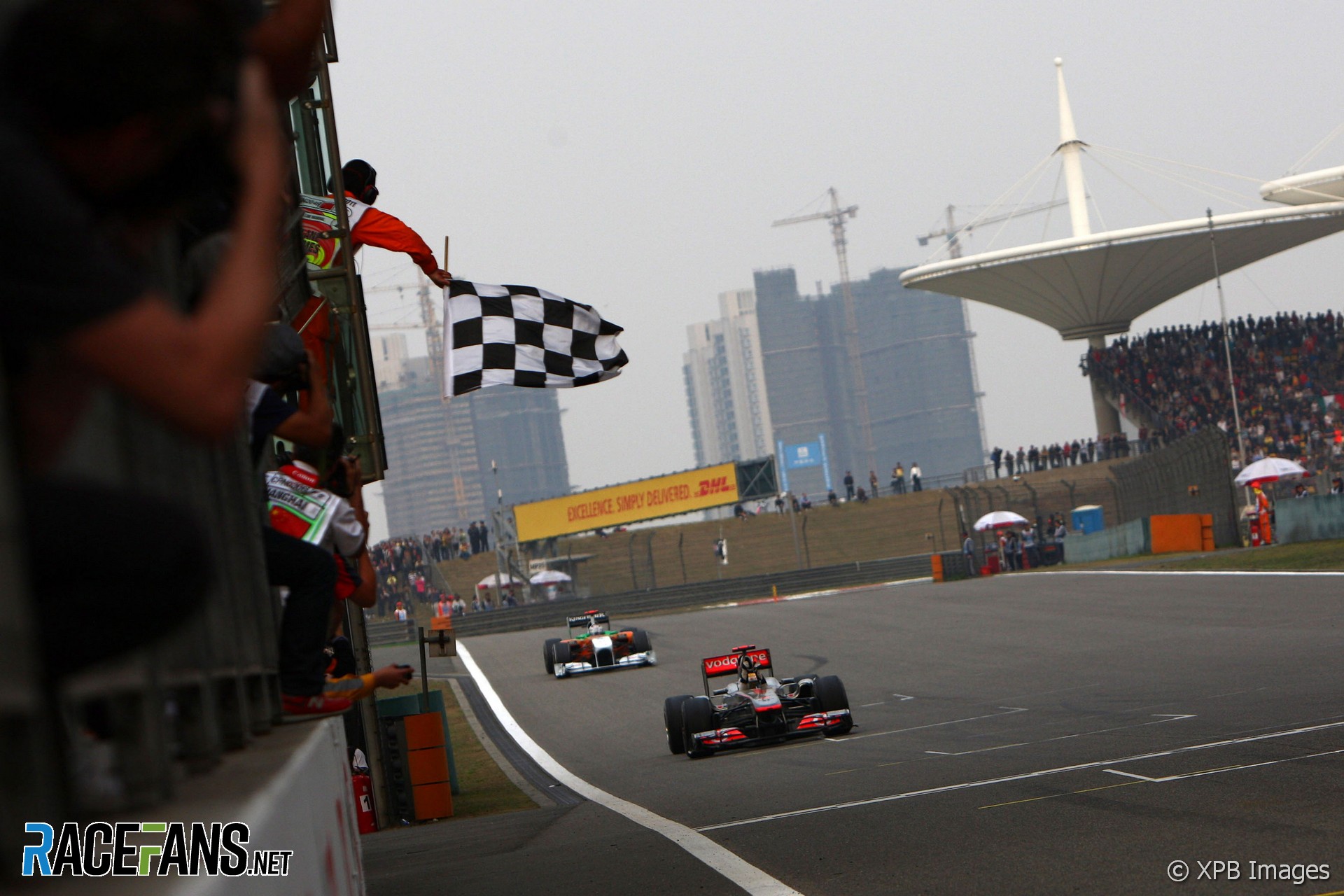 Lewis Hamilton won the Chinese Grand Prix after a thrilling conclusion to the race.

Hamilton passed his own team mate, Nico Rosberg, Felipe Massa and race leader Sebastian Vettel on his way to victory.

Mark Webber arrived in an unlikely third place having started 18th on the grid.

Hamilton was briefly under threat of not starting the race as the team discovered a problem with his engine before he left he pits to go to the grid. He made it out with only a few seconds to spare.

Once the lights went out McLaren’s race started to go better. Jenson Button burst past Vettel at the start, followed by Hamilton.

Vettel was left to protect his position from Nico Rosberg, who in turn had the two Ferraris behind him.

The leaders held station in the opening laps with just two seconds covering the top three. Button came in first but lost his lead as he bizarrely tried to stop in the Red Bull pit box where they were waiting for Vettel.

Vettel got out of the pits before Button, and Hamilton lost so much time on his worn soft tyres that he dropped behind Felipe Massa before pitting.

Rosberg made his pit stop early and took the lead after the Ferrari drivers had come in. But while Mercedes and McLaren committed to a three-stop strategy, Ferrari and Vettel would only make one more stop.

Rosberg and the McLarens made their second stops and quickly began catching the leaders again. Fernando Alonso was particularly slow in his middle stint and all three came past him very easily.

Vettel and Massa made their last stops, leaving Rosberg in the lead once again. But Button dropped off the pace and Hamilton pounced at turn one to take second place.

Their final round of pit stops set up an exciting showdown to the chequered flag with Vettel and Massa nursing their hard tyres and Hamilton closing in.

He made a couple of attempts at passing Rosberg and finally got through when the Mercedes driver was briefly delayed by Pastor Maldonado.

A little over a lap later he was past Massa as well and cutting into the gap to Vettel.

Meanwhile Webber had made an improbable recovery having started 18th. He passed Massa, Rosberg and finally Button to take third place.

For almost two laps Vettel and Hamilton battled wheel-to-wheel but Hamilton’s superior pace, and Vettel’s apparent loss of KERS, eventually told. He pressured Vettel using the Drag Reduction System on the long straight, followed him closely around the opening corners, then dived past under braking at turn seven.

Michael Schumacher and Alonso had a length battle during the race and took the chequered flag with Alonso just in front of the Mercedes. At one point Alonso’s DRS was briefly open outside of the designated zone, though it seemed to have little effect on his race.

Vitaly Petrov and Kamui Kobayashi were the remaining points scorers.

Behind them was Paul di Resta, who defended 11th in a wheel-banging moment with Nick Heidfeld.

All bar one of the starters was running at the end. The exception was Jaime Alguersuari, whose Toro Rosso shed a rear wheel following a pit stop.

Hamilton’s win moves him up to second in the championship. Vettel’s winning streak may be over, but he still enjoys a 21-point lead in the drivers’ standings.