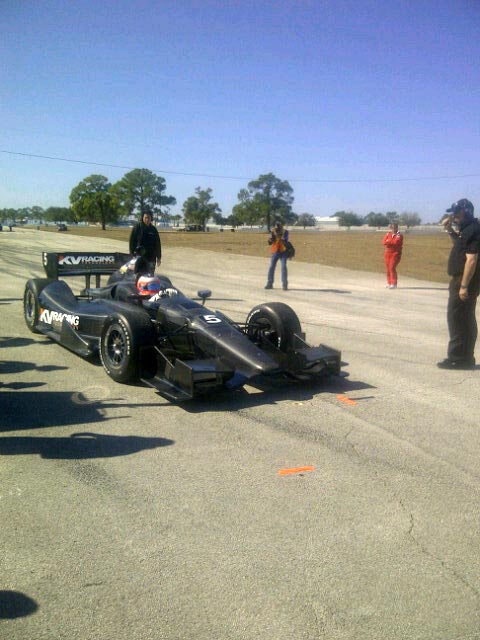 In the round-up: Rubens Barrichello tests for IndyCar team KV Racing at Sebring.

Barrichello has no plans beyond 2-day IndyCar test (Associated Press)

“I have been a racer for too long to just give it all away right now. I have a lot of speed in myself. I know that and I want to continue to race.”

“Tony Kanaan leaves pits for the first time and stalls, Rubens Barrichello says ‘last time I get advice on car from TK’.”

“McLaren has had absolutely no contact with PURE for many months. Moreover, the contact we did have with PURE, many months ago, was of an entirely informal nature, and was merely a courtesy gesture.”

“‘I did everything to try to settle this row,’ Sutil told the court, adding he had even offered to support a Lux charity project in Africa.”

Bahrain has failed to grasp reform ?¾įķ╝įŪŻ so why is the grand prix going ahead? (The Guardian)

“Reporters Without Borders has just named Bahrain one of the world’s top 10 most repressive regimes, while Freedom House downgraded Bahrain from ‘partly free’ to ‘not free’.”

Interesting to note Reporters Without Borders ranks China, which of course is another F1 host nation, below Bahrain.

Beneboy was not moved by my optimistic view on the season ahead:

I?¾įķ╝įõ¾m finding it increasingly difficult to get even a little bit excited about the start of the season.

Ugly cars, stupid rules, artificial overtaking, boring circuits and a complete denial of reality from FIA/FOM/Teams that the main problem with F1 is that the cars have become so dependent on aerodynamics that the driver is almost an irrelevance and that the racing has become close to non-existent without the use of artificial devices such as DRS and silly tyre rules.

We were treated to a trio of launches on this day last year: Renault, Sauber and Lotus unveiled their new cars on the same day: