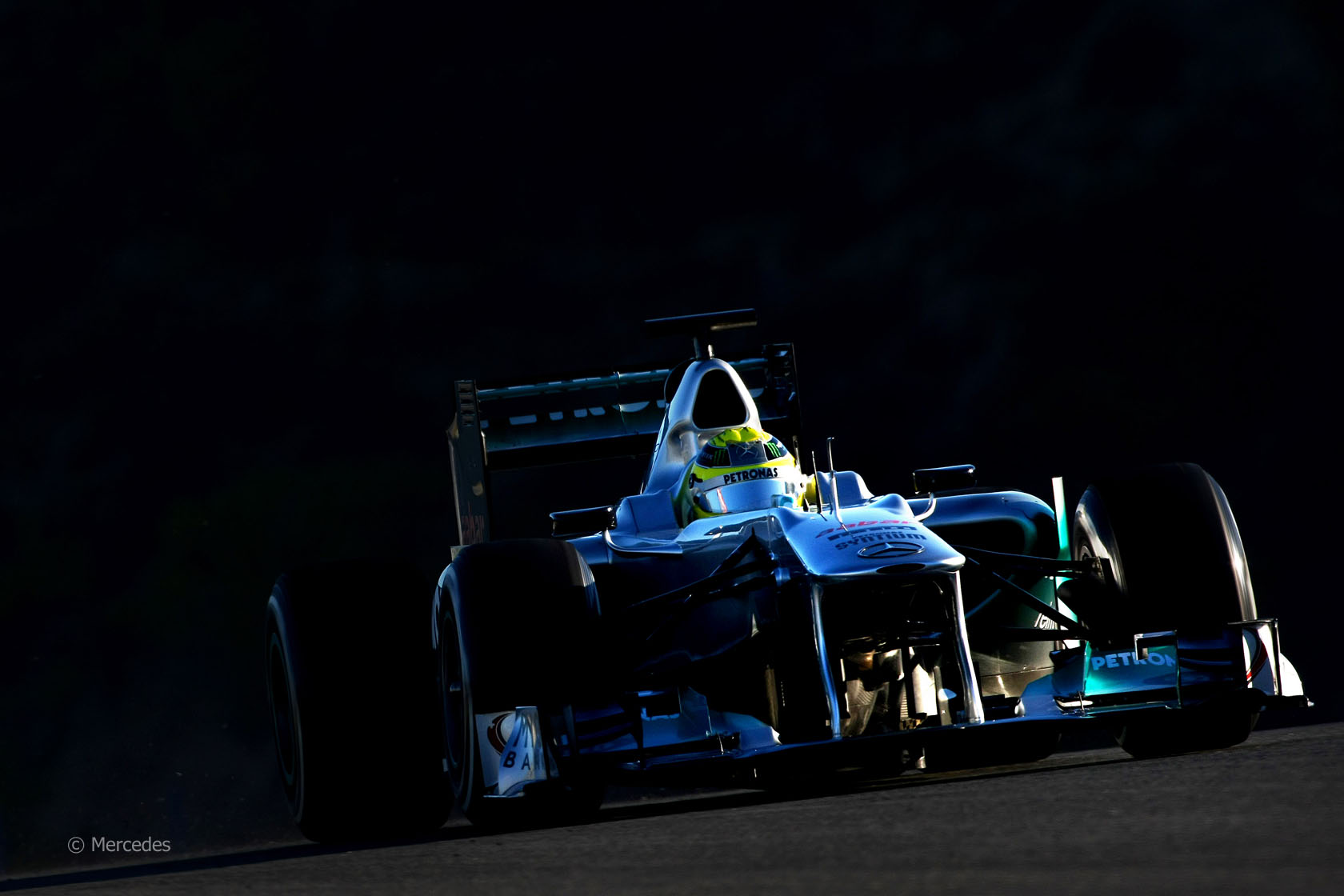 Mercedes remained on top of the time for a second day in Jerez with their 2011 car.

This time it was Nico Rosberg’s turn to lap the Spanish circuit quickest, setting a time of 1’17.613, almost a second quicker than Michael Schumacher’s best effort in the W02 yesterday.

That concluded Mercedes’ involvement in the test as they will not be present for the final day’s running. The team will launch its W03 before the next test in Barcelona.

It was a largely wasted day for Force India after Jules Bianchi crashed and damaged the team’s car on his third lap of the day. The team’s reserve driver damaged the right-rear of the car

That forced the team to abandon plans to give Nico Hulkenberg his first run in the new car. The F1 returnee will instead get to drive the VJM05 for the first time tomorrow.

“I made a small mistake on my second run,” explained Bianchi. “The tyres were a bit cold and I spun into the gravel and touched the wall with the right rear wheel.

“It was not a very big impact, but it caused some damage. I?óÔéĽÔäóm very sorry because my mistake has cost the team a lot of time and effort.”

Another reserve driver who hit trouble during the test was Giedo van der Garde. The Caterham driver spun and stopped with just over an hour remaining in the test.

Romain Grosjean was fastest earlier on in the day, setting a 1’18.419 as he drove the Lotus E20 for the first time. Like Rosberg, Grosjean registered well over 100 laps of the circuit. The Lotus driver stopped on the track with five minutes remaining in the session, bringing out the red flag for the third and final time.

Sebastian Vettel was third-fastest on his first day in the new Red Bull RB8. Red Bull owner Dietrich Mateschitz was in attendance to see the world champion trying out his latest car for the first time.

Lewis Hamilton and Fernando Alonso also made their first appearances for McLaren and Ferrari respectively – the latter greeted by an enthusiastic crowd in his home country.

At Williams Bruno Senna had a productive day in the FW34, completing more laps than Pastor Maldonado had managed in the previous two days combined.

62 comments on “Mercedes stay on top in Jerez test”