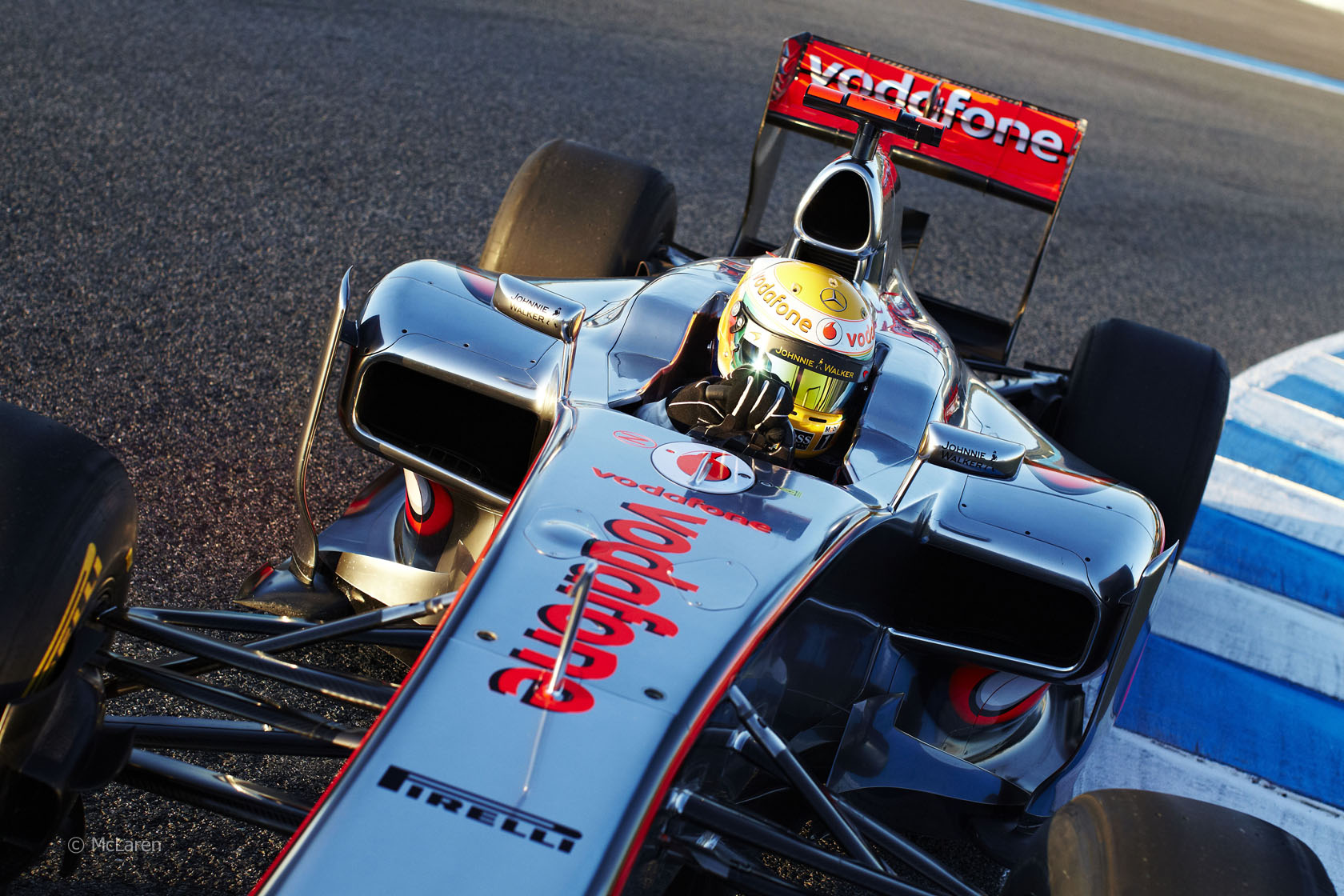 McLaren have not followed the 2012 trend for stepped noses – their MP4-27 is the only car revealed so far with a smooth nose.

It clearly looks better, but will it cost them in performance?

The team have been world championship runners-up for the last two seasons and are aiming to bring Red Bull’s domination to an end.

“It’s there for the taking; if we work hard enough and pull together as a team we should be aiming to win this championship.”

It was clear throughout 2011 that Jenson Button has found a happy new home at McLaren.

He produced a consummate performance in his second season with the team, winning three times and scoring more points than his fellow world champion team mate.

Button excelled in getting the best out of the fragile new tyres introduced last season. On the face of it, with Pirelli bringing softer rubber for their of their four compounds, he stands to benefit further this year.

Whether he can turn that into the basis of a championship campaign will, of course, depend on how competitive the MP4-27 is.

Button said that is likely to remain something of a mystery until qualifying in Australia: “You do all the work you can with your team and get the best out of the equipment that you have, and then you arrive at the first race and you see.

“I mean, even in practice on Friday before a race you don’t know where you stand. Qualifying is the place where you find out where you are compared to your competitors.”

The rivalry between him and his team mate adds a fascinating dimension to the contest. The pair are closely-matched but team harmony was put to the test when they clashed in Canada last year.

Lewis Hamilton had a season of extreme highs and lows in 2011.

The highs included three wins – two of which were classic Hamilton victories in China and Germany where his prowess in wheel-to-wheel combat won him the day.

But the lows – and there were many of them – came on the too-frequent occasions when his racecraft was found wanting.

The result was a string of needless collisions, a record number of trips to see the stewards, and a public row with Felipe Massa.

Although Hamilton was not always at fault it raised questions about his state of mind. His deliberate non-celebration after taking pole position in Korea fuelled speculation that all was not well within the Hamilton camp.

This year Hamilton will benefit from the experience of Didier Coton, former advisor to Mika Hakkinen. His progress will be keenly observed for signs of whether he can cut out the unnecessary mistakes that spoiled his 2011 campaign.

But that wasn’t the only chink in his armour last year. While he usually got the better of Button in qualifying, the tables were often turned on race day as Hamilton couldn’t make his tyres last as well as Button. It’s an area where he needs to improve this year.

This is an important season for the 2008 world champion as he weighs up his options for the future. His McLaren contract is up for renewal and his public chat with Christian Horner in Canada last year provoked speculation he is considering a move to Red Bull.

The MP4-27’s smooth nose makes it stand out in a field of step-nosed rivals. But inevitably, it has led to speculation that they might be missing a trick.

In a clear step forward from last year, the new car has run reliably in pre-season testing. In 2011 McLaren struggled with a complicated exhaust system and eventually abandoned it on the eve of the new season, bringing in a new solution for the first race.

The MP4-27 is substantially changed from its predecessor. Aside from the nose, one of the most visible changes is to the sidepods, where the U-shaped vents of last year are gone.

Technical director Paddy Lowe said: “This car in many ways looks quite similar but… underneath [there’s] a great deal of change.

“Every single part has been assessed, optimised for weight, stiffness, performance in any other respect. And when you add all of that up you get a car that’s net quicker, that’s the name of the game. So in every area the teams are tasked to find that one percent, two percent because we’re looking for that total.”

“There are a few features that we were pushing very hard from early on in the project and we’ve just stuck to the things that we think really, really matter, where we’re going to extract most performance from the car, and I’m just really proud of the whole team and their efforts so far this year.”

Last year as McLaren strove to put Red Bull under pressure there were times when they failed to take advantage of the performance that was available to them. Notably in Monaco, where a failure to get Hamilton’s car on track early enough in qualifying turned a potential shot at victory into a weekend to forget.

The hiring of Sam Michael from Williams as sporting director is partly aimed at ironing out these operational flaws. He describes his role as “sorting out the race team – and when I say sorting out, it’s already a very defined machine.”

“But McLaren is all about making things better than what everyone else is, and not using existing standards as a benchmark but trying to create new ones.”

McLaren have made a bad habit of going into new seasons with cars that are well off the pace – such as in 2009 and, to a lesser extent, last year. The early signs are the team have avoided falling into that trap this year, though as ever we won’t know for sure until the first race weekend.

Which driver do you think will hold the upper hand at McLaren this year? Can they take the fight to Red Bull?

Have your say on McLaren’s prospects for the 2012 season in the comments.