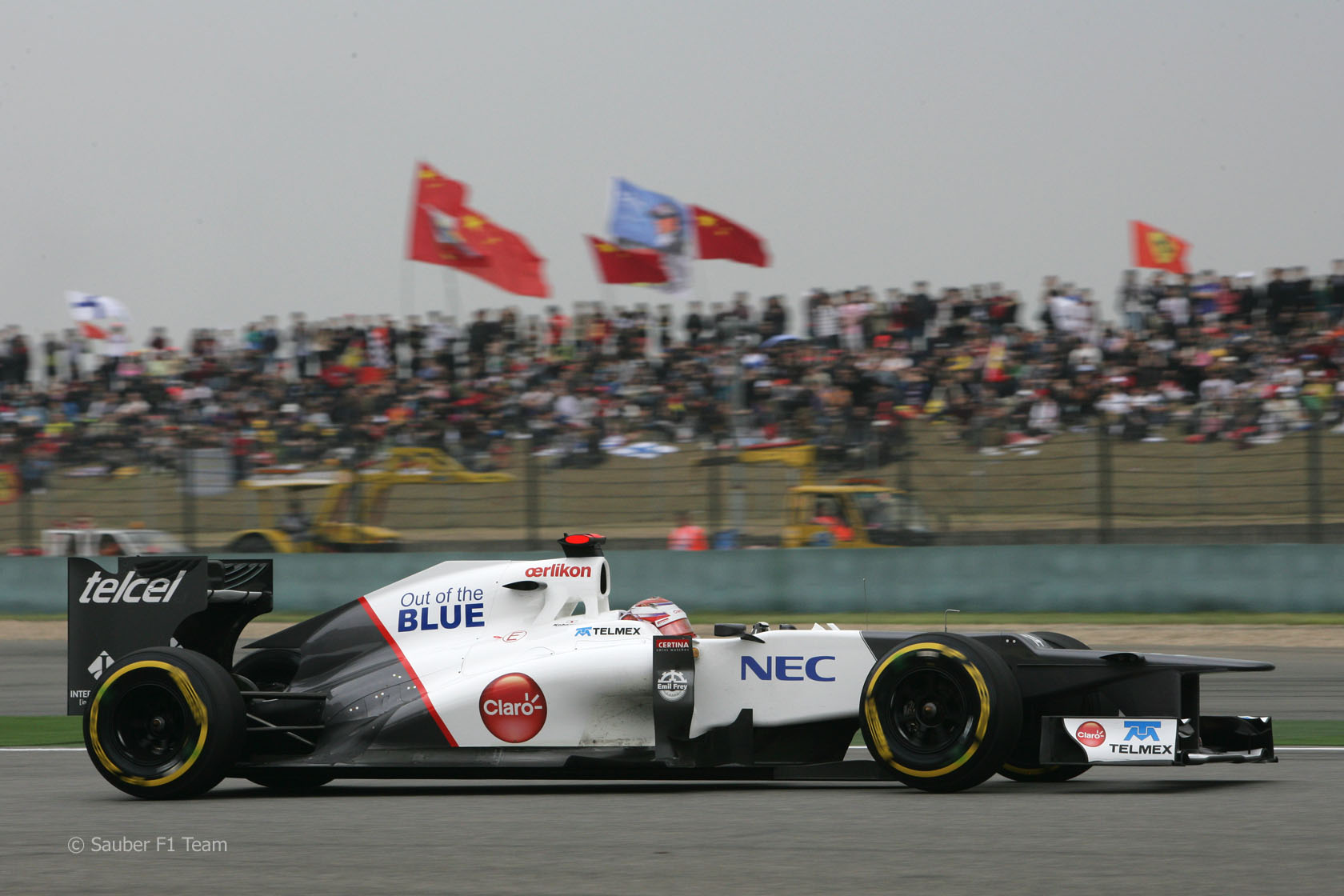 It’s not often that a dry qualifying session produces a grid quite as surprising as this one.

We have a pair of Mercedes on the front row – though recent form suggests they may struggle to sustain their advantage in the race.

That could open the way for row two starters Kamui Kobayashi and Kimi Raikkonen to seize the intiative.

Lined up behind them are a host of quick drivers looking to break through and score a win, including Jenson Button, Mark Webber and Lewis Hamilton.

Last year’s Chinese Grand Prix was rated the most exciting of the year, and this grid promises another gripping Grand Prix in Shanghai.

Nico Rosberg will no doubt be very pleased with his maiden pole position but he should beware – the pole sitter at this race has been third at the end of lap one in the last two years.

Granted, on one occasion that was because Fernando Alonso had jumped the start.

But even so Rosberg should be prepared to fend off Michael Schumacher and Kamui Kobayashi, who tend to make good starts.

As the racing line crosses the start/finish area, neither side has a particularly strong advantage over the other. The expected overnight rain will also have washed away the surface deposits of rubber and evened out the differences between the two.

Tomorrow’s race is set to be dry and all nine of the drivers who set times in Q3 will start on the soft tyres.

Pole sitter Rosberg saved a set of new soft tyres by only doing a single lap in Q3. This should help him in the race, but even so Mercedes are concerned over their car’s performance over a race distance.

They had excess tyre degradation in Australia, and exhibited signs of the same in practice yesterday. However in Malaysia they had the opposite problem – failing to heat the tyres sufficiently, which meant they couldn’t get them into the operating window.

If Mercedes have cracked that problem – and it’s a big ‘if’ – they’re in a good position for the race.

Sauber have one of the kindest cars to its tyres, which should play into Kobayashi’s hands – especially if he can get away with making one fewer pit stop than his rivals.

Lotus’s form this weekend has been much harder to read. They binned several of their planned upgrades and their performance has varied as the temperature has risen and fallen. But the team came into this weekend hoping for a “normal” race in which they could show off their potential and so far they look likely to get it.

Lewis Hamilton was quick throughout practice and is optimistic about his chances despite being relegated to seventh on the grid: “I?óÔéĽÔäóve set my car up to be at its strongest in the race.

“So, although Jenson and I are a little bit further back than we?óÔéĽÔäód like, and we?óÔéĽÔäóve got a bit of work to do, we can still make it. There?óÔéĽÔäós a good group of drivers ahead of us on the grid, but we?óÔéĽÔäóre right with them in terms of race pace.

“This is a track where you can overtake, and we?óÔéĽÔäóve got DRS too ?óÔéĽÔÇŁ so I?óÔéĽÔäóm massively excited about tomorrow.”

He’s not the only one. This has the makings of a humdinger of a race.

A change in track temperature in Q3 caught several drivers out. The temperature fell during the session which meant that those who set a lap early on enjoyed the best conditions.

Those who waited until later in the session generally improved very little on their Q2 times, or were slower. Sergio Perez was once such case: “After the previous runs had been very promising, on the final lap in Q3, when I was on a fresh set of soft tyres, I suddenly had understeer. I don?óÔéĽÔäót know where this came from.”

The wind also changed direction between the two sessions, which goes some way towards explaining how we went from having the top 11 cars covered by three-tenths of a second in Q2, to the first two separated by twice as much in Q3.

Romain Grosjean did not set a time in Q3 as his mistake in Q2 meant he has already used all his fresh sets of soft tyres.

Having been 18th in final practice, Felipe Massa was relieved to qualify 12th, even if he didn’t understand why: “In the afternoon, the situation improved, the car had much more grip and I managed to be more competitive, but I couldn?óÔéĽÔäót say exactly why. Probably the track conditions changed in a way that suited us.”

Sebastian Vettel had the pace to reach Q3: had he set his three fastest sector times on the same lap in Q2 he would have made it into the final ten by nine-hundredths of a second.

Mercedes were the fastest cars through the speed trap on Friday, but now appear in the middle of the list. Most likely they have added downforce which may ease their tyre degradation problems.

Significantly, when Hamilton asked during Q3 where he needed to find time to Rosberg, he was told the Mercedes was around 0.15s quicker in all three sectors, whereas before its advantage had been concentrated in sector three with its long straight.

Sauber appear to have gone in the opposite direction to Mercedes. Before the weekend began Perez voiced concers about the car’s straight-line speed.

Who do you think will win the Chinese Grand Prix?

Can the Mercedes drivers look after their tyres and finish on the podium – or even win?

50 comments on “Grid of surprises promises another China thriller”