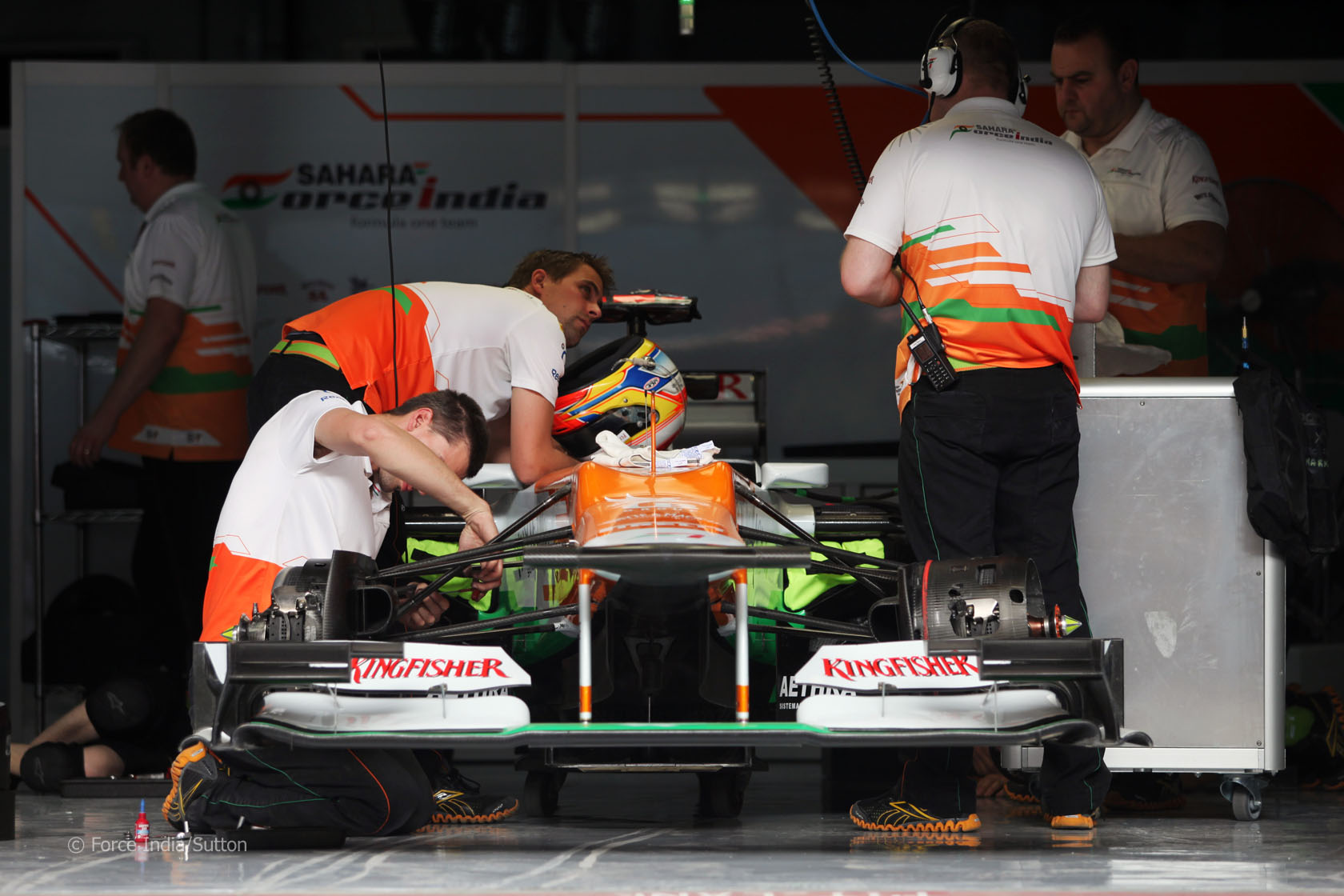 In the round-up: Nico Hulkenberg says “we shouldn’t have been put in this position” as two Force India team members return home after a petrol bomb explosion in Bahrain.

“Two mechanics from the Force India Formula 1 racing team fled Bahrain today after their colleagues were nearly engulfed by a petrol bomb.”

“We shouldn’t have been put in this position […] Whether it is right or not I don’t really know. It’s difficult to say. I am not a politician, I am a Formula 1 driver, but it should not really be happening should it?”

Force India vow to race despite petrol bomb (The Telegraph)

Paul di Resta: “It’s a difficult one isn’t it. I’m sure it’s affecting everybody at the moment, the actions that have happened. I’ve not spoken to everybody within the team, but there is some concern and some people have felt it a bit more than others.”

Syria crisis, Bahrain unrest – as it happened (The Guardian)

“Foreign journalists have been barred from Bahrain in the run-up to the race, including journalists with the Associated Press, Sky News and Agence France-Presse.”

“Force India have fitted electronic trackers to their cars. Teams and leading media organisations, such as the BBC, are removing entry passes from the windscreens of their cars and minibuses as they leave the circuit and taking off or covering branded clothing. They are also now travelling in convoy on the highways, under orders to ‘stick together’.”

“Western companies are opting not to entertain clients and partners at the Bahrain Grand Prix following calls for sponsors to boycott the event because of political turmoil.”

Protests over the Bahrain Grand Prix 2012

Responses from F1 teams and sponsors asked to boycott the Bahrain Grand Prix.

Details of planned protests in Bahrain this weekend.

“‘I’ve come here for the sport’ – two times Bahrain F1 winner, Felipe Massa. Great to have you and Ferrari here.”

“Good to see Autosport “vehemently disagree with our sport being used for political subterfuge”. I agree. (Quote from today’s issue, couldn’t find it on the website).”

Fernando Alonso: “We are here because the decision made by people who had all the information in their hands, the FIA etc, so we are following their instructions. If we are here it?ů‘ťľ‘šůs because everyone thinks we safe to be here, so no problem. But obviously we need all the information about this incident, etc.”

“The target every year is to have consistency and some years it doesn’t go to plan. But this year I am fortunate to be on the podium at each of the three races, so it’s fantastic.”

“Helping that cause is the one new feature that Codemasters is happy to fully disclose right now, with the Young Driver Test serving as an introduction to the deeper end of the sport. It’s accessibility that’s also about authenticity.”

I’ve seen quite a few comments from people avoiding this weekend’s race – here’s one from Lopek:

Given my views, I think to watch it ?ů‘ťľ‘«£ and so to support it indirectly ?ů‘ťľ‘«£ would be completely hypocritical. I won?ů‘ťľ‘šůt be. It will be the first race in my life that I can remember missing through choice ?ů‘ťľ‘«£ 30-plus years of viewing starting with dad as young kid.

I?ů‘ťľ‘šůve watched every session live since the practice sessions started being shown live, no matter the time of night. I plan my (self employed) work schedule around the Friday sessions. My holidays are fitted in the gaps in the season….
Lopek

For reasons not relating to the situation in Bahrain this weekend, I will not be writing the practice reports today.

Instead I am very pleased to confirm Will Wood will be taking charge of them today. Many of you already know Will, who has posted on here before as Magnificent Geoffrey.

Phil Hill, who won the world championship in 1961, was born 85 years ago today.