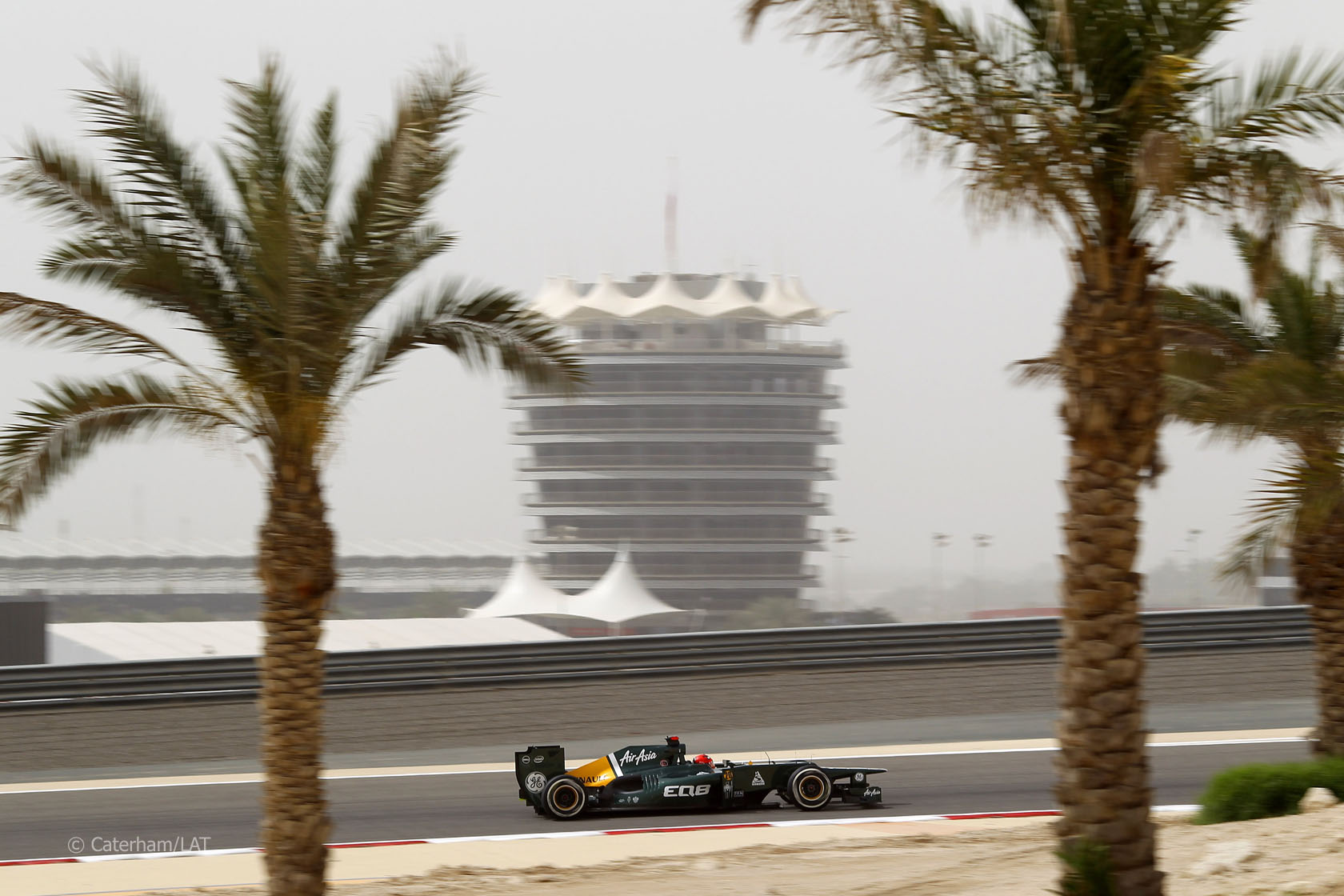 Todt speaks out at last on Bahrain (James Allen)

“One obvious own goal has been the decision to allow the F1 brand to be used on the ‘UniF1ed’ poster campaign for the race, a clear political use of the brand, which the FIA rules would appear not to allow and which contradicts all statements about sport and politics not mixing. As does the messaging of Bahrain being ‘back on track’. Asked about this by the BBC?¾įķ╝įõ¾s Jake Humphrey, Todt swerved the question.”

“Pleased to see Jean Todt, FIA president, made it into the F1 paddock in Bahrain today. Gave interviews to selected media and press. Not The Times, though. Perhaps he is still upset at our coverage of Bahrain Grand Prix…”

“FIA president Jean Todt, lambasted for keeping such a low profile during the crisis, finally shows up in the paddock. But it seems that I, along with my Fleet St colleagues, have now been blacklisted as he speaks only to other agencies and TV outlets.”

“A man has been killed in Bahrain during overnight clashes with the security forces, activists say, a day before Sunday’s F1 Grand Prix.”

Bahrain protester’s family: ‘we were not allowed to see the body’ – video (The Guardian)

“The brother-in-law of Salah Abbas Habib, the anti-government protester found dead on the eve of the Bahrain Grand Prix, says the family were told a body had been found inside a compound but they were not allowed to identify it.”

“The chief said more details would be released as they become known. He reminded everyone, both journalists and the public, to wait for the facts to be established and not to believe unconfirmed reports on social media channels.”

“Other protesters who survived the same incident said they were beaten by police, according to activists.”

“Anti-government protesters in Bahrain flooded a main highway in a march stretching for miles and security forces fired tear gas in breakaway clashes as the country’s leaders struggle to contain opposition anger ahead of the Grand Prix.”

Deputy team principal Bob Fernley: “If we hadn’t taken the steps we did, we were close to unravelling. It was just very, very important.”

Formula One lives in a Bahrain bubble (Reuters)

“FIA President Jean Todt broke a 10-day media silence on Saturday to say that he was sorry ‘about what has been reported’ rather than expressing any doubts about giving the green light to the race at a time when the Gulf kingdom was still undergoing so much turmoil.”

“I spoke to the Foreign Minister of Bahrain today to express our concern about the violence in Bahrain, to call for restraint in dealing with protests including during the Formula One race and to urge further progress in implementing political reforms.”

“I think we are here now, and after this event we need to sit down and discuss it. We are committed to this race, we are having a race, and after the race with proper judgement of what happened and what we saw, we need to come to a conclusion.”

“Been reprimanded for the positive [Bahrain question] I asked in press [conference yesterday]. Apparently they felt it was an attack.”

Bernie: India not Forced off TV (The Sun)

“F1 supremo Ecclestone… rebuffed the accusations they were being punished for leaving the circuit early… “They have a whisky company prominently on the car. They should have taken it off. The TV could not show that.” […] However, SunSport understands that Force India were given the green light to run with the logos of whisky brand Whyte & Mackay.”

“What baffles me is that the racing drivers should be seen as so controversial, whereas (so far as I can tell) neither [Yvette] Cooper nor [Ed] Miliband has had anything to say about the British government approving the sale of arms to Bahrain long after its uprising started in February 2011.”

Bahrain analysis: how Formula One plan may have backfired for Gulf kingdom’s ruling family (The Telegraph)

“Officials came up with the slogan “UniF1ed” had hoped that Bahrain’s showcase event would deflate the Shia street protests that had campaigned so vocally for its cancellation. Yet the opposite seems to have happened, with the questionable nature of the regime’s triumph exposed by the thousands of demonstrators who gathered on Friday and Saturday, the first two of three ‘days of rage’, to denounce the ruling family.”

Inside Story – Bahrain’s ‘days of rage’ (Al Jazeera via YouTube)

“The decision to allow Breivik to enter Formula 1 is ‘not about the money’, according to F1 boss Bernard Ecclestone. ‘Anders Breivik is entered into Formula 1. It?¾įķ╝įõ¾s all scheduled,’ Mr Ecclestone said. ‘And although I essentially own, run and completely control the sport, I can’t do anything about that. It’s up to the teams.'”

“Vergne will now keep his starting position of 19th place on the grid, after failing to progress from Q1 during the qualifying session.”

“After we did the data analysis we found out that we had a problem with the front wing which caused us to lose a lot of downforce [in China]. So it had nothing to do with strategy. Very likely, under normal circumstances, the two-stop strategy would have worked.”

“The company recently renewed the Formula 1 licence through to 2015. Formula 1 2011 has sold around 2m units and Dirt 3, another leading racing title, has sold more than 1.5m units globally.”

My thoughts on the race ahead.

AJ sets out a case against those in charge of Formula 1:

People appear to be sick and tired of the manipulation of F1 by certain individuals.

We have an FIA who sanctioned the use of slogans “UniF1ed = one nation in celebration”, a slogan that was propose and run from February. This is clearly in breach of article 1 of the FIA statute.

Ecclestone is under criminal investigation around the acquisition of the rights for F1 and sale to CVC. $1m a year to buy them from his mate head of the FIA. He is a present trying to sell these rights for $10billion.

The bullying tactics over the Concorde Agreements are a matter of historical fact, and are happening again this year.

The decision by the FIA to go to Bahrain has been proven ridiculous, the world?¾įķ╝įõ¾s media has had a field day in criticising F1 this weekend.

Ross Brawn has gone on record today saying, “it is important for the sport to ask whether they did the right thing coming here racing”. If it was clear there was no problem with the decision, why suggest this? […]

Happy birthday to Fixy and Kaylee911!

Jean Behra won a non-championship race around the Pau street circuit at the wheel of a Maserati 250F today in 1957.