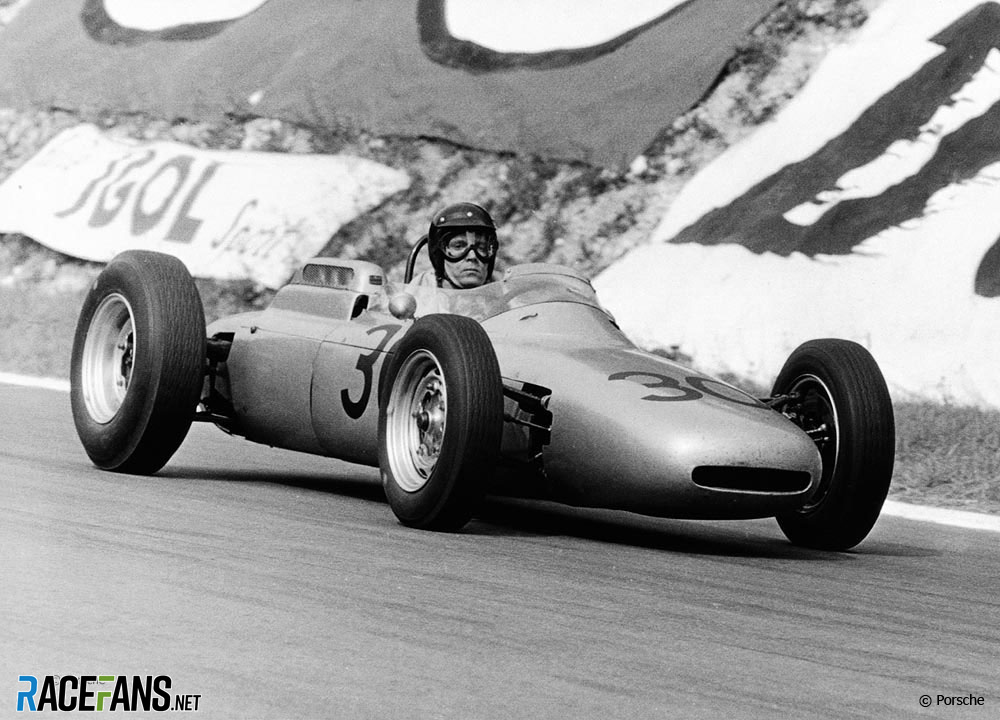 Porsche’s brief time as a factory entrant in F1 culminated in its only race-winning car: the 1962 Porsche 804.

Yet shortly after Dan Gurney’s triumph in the 1962 French Grand Prix, the team cancelled its F1 programme, and has never returned to the sport as a full constructor.

The 804 differed from its 1962 competitors chiefly in its engine. Porsche produced an eight-cylinder ‘boxer’ engine of 1.5-litre capacity, the maximum permitted at the time. Though somewhat breathless at lower revs it produced 180bhp.

The chassis was wider than most to accommodate the engine, and Porsche paid careful attention to the contemporary Lotus cars when designing its suspension.

During the season the fuel tanks in the car were rearranged so the driver’s seat could be angled backwards, allowing him to sit lower in the car.

Ferdinand Porsche was reluctant to allow his creations to compete if he felt they wouldn’t be competitive. The latest cars did not appear in two of that year’s world championship races and only a single car was sent to Monaco, which was knocked out of the race at the first corner.

However after Dan Gurney successfully completed a race distance in testing at the Nurburgring Nordschleife, Porsche consented to send his cars to Rouen-les-Essarts for the French Grand Prix.

Gurney (pictured in the race) qualified sixth and inherited the lead after Graham Hill and Jim Clark suffered technical problems. He finished a full lap ahead of Tony Maggs’ Cooper for his first Grand Prix triumph and Porsche’s only world championship win.

Further success followed in the Solitude Grand Prix, a non-championship race held in Stuttgart not far from Porsche’s base. Before a 300,000-strong crowd, Gurney led team mate Jo Bonnier to a one-two finish.

For the German round of the world championship at the Nurburgring Gurney put the car on pole position and led the field away. But his battery worked loose in the cockpit and while he dealt with the distraction Hill and John Surtees nipped past.

Gurney gave chase and after almost two hours and forty minutes the trio crosses the line covered by four-and-a-half seconds, Gurney in third.

Although Porsche had shown it was able to compete in the top flight it balked at the costs it had incurred developing the 804. The cars were not sent to the final race in South Africa as the team quietly canned its F1 programme.

Porsche explain their reasons for leaving Formula 1 50 years ago on their own website as follows: “As Porsche always regarded motorsport as the starting point for new developments and improvements for the production sports car, it therefore returned its attentions predominantly to the GT cars and long-distance sport – Porsche’s true domain.”

Since then Porsche has only competed in F1 as an engine builder. First was their enormously successful TAG-Porsche 1.5-litre turbo engines used by McLaren to win races and championships in the mid-eighties. Later came a disastrous association with Footwork in 1991, who ditched Porsche’s 3.5-litre V12 after just half-a-dozen races.