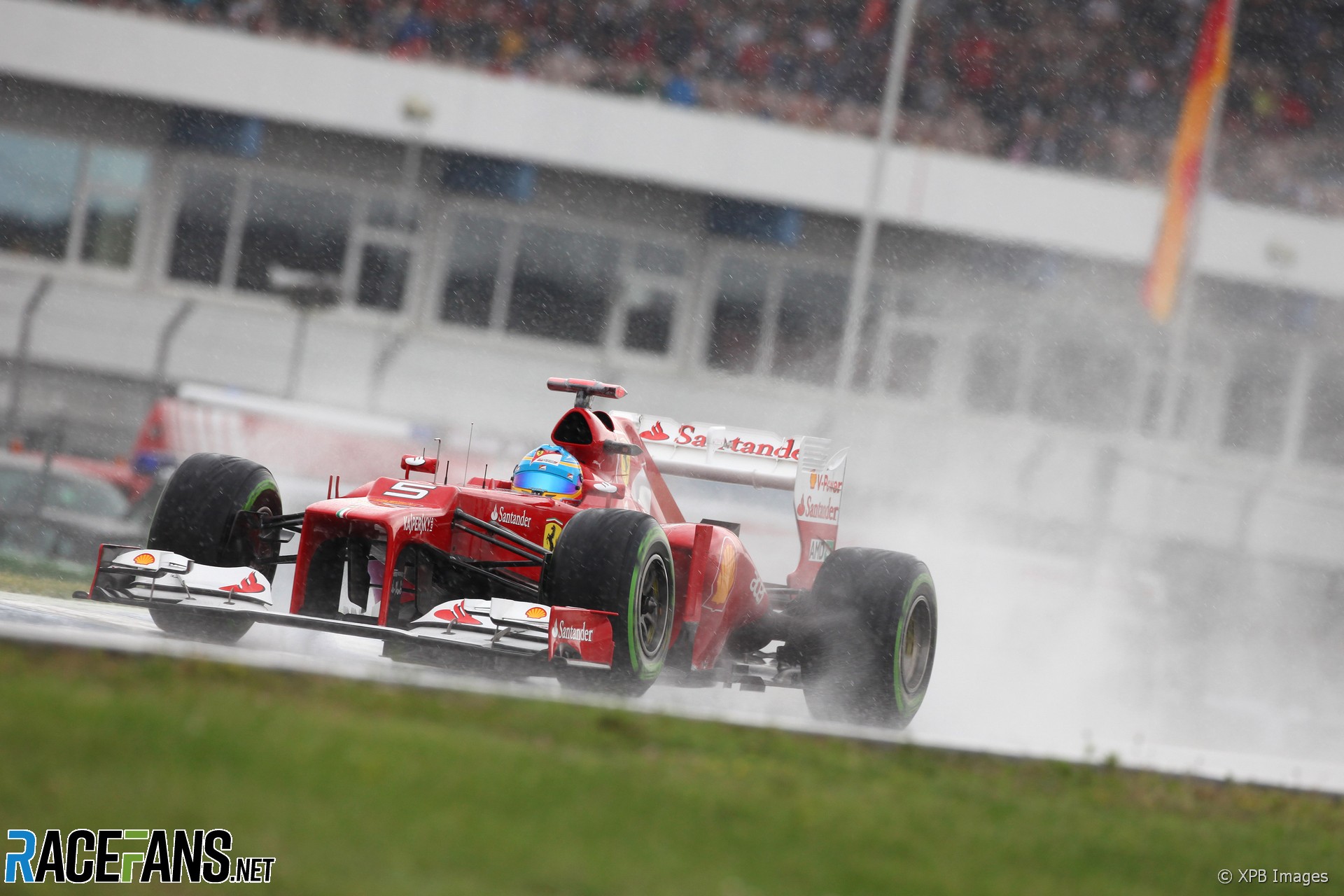 Fernando Alonso starts from pole position for the second race in a row after another wet qualifying session in Germany.

The Ferrari driver survived a near-miss with his team mate in Q2 and will share the front row of the grid with title rival Sebastian Vettel.

Qualifying began on a dry track but with clouds gathering the drivers did not waste a moment in heading out to set their first times. Within minutes the track had all 24 cars circulating, and inevitably some drivers having to cope with slow traffic.

The first of those was Nico Hulkenberg, who had to dodge past a series of slower cars in the final sector as he completed his first lap.

Lewis Hamilton was fastest of the first group of runners, setting a 1’16.221. Team mate Jenson Button was briefly third with the Sauber of Sergio Perez between them.

But as the session continued without rain falling, thoughts turned to the battle to escape the bottom seven. Hulkenberg was the first to return to the track having fallen to the dreaded 18th, but was able to claim a place in Q2 with his next run.

Michael Schumacher cut it incredibly fine. Despite doing his final lap on the harder mediums tyres, he claimed 17th place by five hundredths of a second. He was a thousandth of a second slower than Romain Grosjean, who was visibly fighting with the Lotus.

Their improvements relegated Jean-Eric Vergne into the bottom seven – he was eliminated in Q1 for the sixth time this year.

Q1 had stayed dry but a huge clap of thunder shook the track before Q2 began. As the session began rain was already falling and the teams scrambled to exchange slicks for intermediates and get their drivers out before the rain got too heavy of the lightly-grooved tyres.

Button’s crew won that race and he took his place among the quickest runners. But it was his team mate who found the most time in the slippery conditions, continuing to improve even as the rain worsened, his intermediate tyres giving greater grip.

Alonso impressively went second fastest with his first run despite team mate Felipe Massa running wide in front of him at turn eight and badly holding him up. Alonso secured a place in the final ten but Massa did not.

Race engineer Rob Smedley urged Massa back onto the track on full wet tyres later in the session, optimistically urging him to find the missing half-second on a now-drenched track.

The rain stopped early in Q3 but left a near-flooded track. Several drivers complained about aquaplaning and Hulkenberg even lost control of his car completely on the curved straight leading to the Spitzkehre hairpin. Fortunately he didn’t hit anything and was able to continue.

Full wet weather tyres were the order of the day and several drivers chose to put a fresh set of them on halfway through session in order to obtain the best of the conditions. Hamilton did not, and the McLaren driver went from being the pace-setter in the first two parts to just eighth-fastest.

Team mate Button did put on another set of full wets but felt it hadn’t been the right way to go. He ended up just seven-hundredths of a second faster than his team mate.

But Alonso used his fresh rubber to perfection. He’d already set one time good enough for pole position and his final effort moved him even further ahead.

Vettel took second after running wide at the Spitzkehre. Earlier in the session he’d remonstrated with his team about being held up by his team mate: “What is Mark doing?” complained Vettel on the radio. “Instead of letting me by he slows me down.”

Webber was third fastest, but his gearbox change penalty will promote Schumacher and Hulkenberg to row two – the latter setting an impressive lap after his spin.