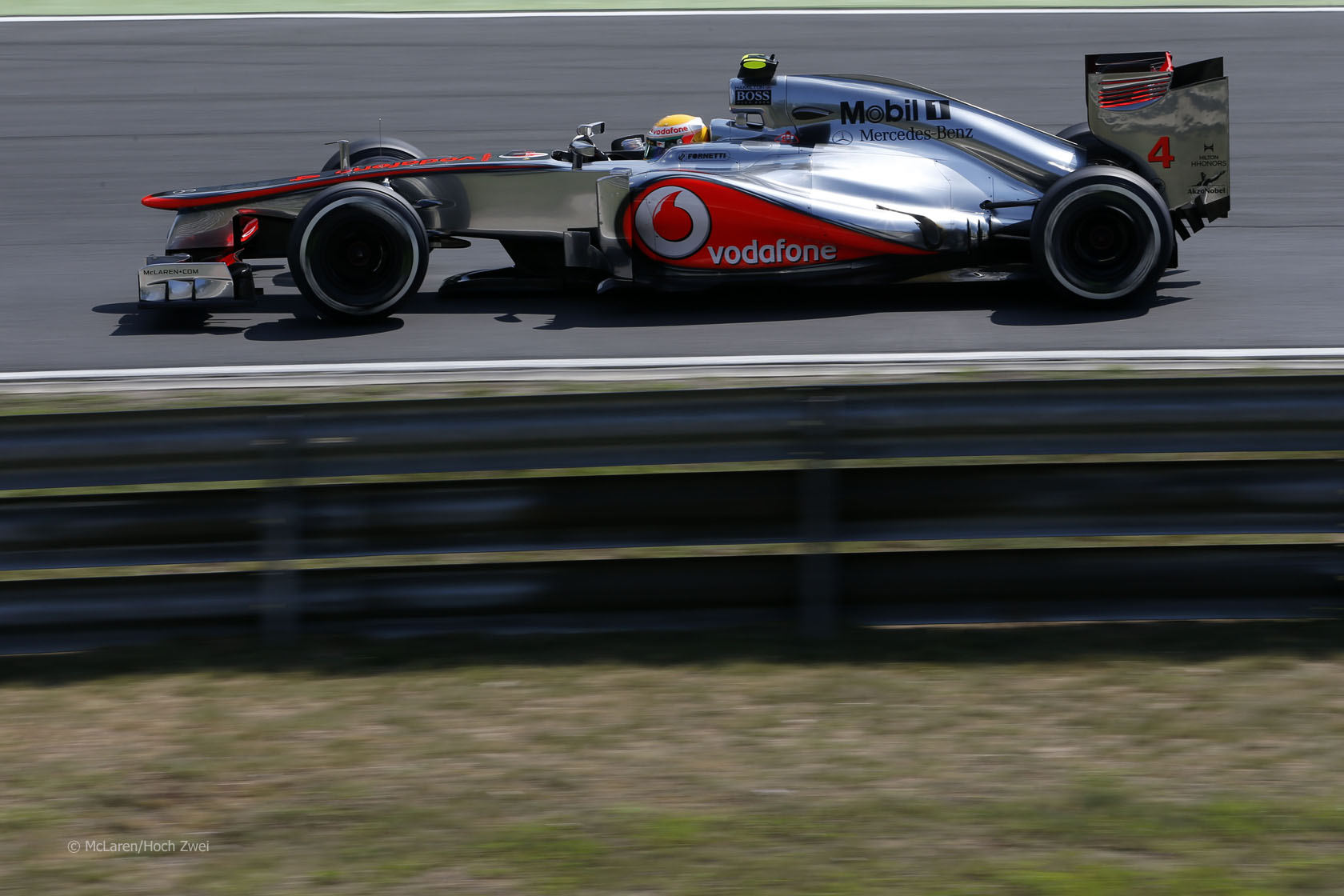 Halfway through the season Lewis Hamilton is fifth in the drivers’ championship, 62 points behind leader Fernando Alonso.

The outcome of the Hungarian Grand Prix will go a long way towards determining whether that deficit – roughly the same as two-and-a-half race wins – is recoverable.

He’s been handed a golden opportunity to claw back some of the lost ground in Hungary. McLaren have shown up with a car that’s clearly capable of winning and perhaps more competitive than it has been all season.

Too many times this year McLaren have let a chance at victory slip through their fingers. They – and Hamilton – cannot afford to squander this one.

This will be Hamilton’s third time starting from pole position at the Hungaroring. He won here from pole in 2007.

But in 2008 he lost his pole position advantage at the first corner when Felipe Massa launched an audacious pass around the outside.

He will be wise to any such threats this time. But the driver he shares the front row with – Romain Grosjean – does not have a strong record of starts this year. And starting off-line is particularly problematic at this little-used venue.

At 440m, the run to the first corner from the starting line at the Hungaroring is one of the longest on the calendar. That presents a significant opportunity for drivers to gain places on a track where overtaking is normally regarded as being very difficult.

Last year’s race in mixed weather conditions made it difficult to get a read on whether the DRS zone has made overtaking much easier in normal conditions at this track. The position of the DRS zone and activation point is unchanged from last year.

The Ferrari drivers have been among the best at making ground at the start this year. Look for Alonso and Massa to gain ground from sixth and seventh at the start.

Practice showed up some discrepancies in performance on the different types of tyre between the teams. Notably, McLaren and Lotus were considerably quicker on the medium tyre than they were on the soft, suggesting this will form the basis of their race strategy.

Despite having a considerable performance advantageon one-lap pace, Hamilton is well aware Lotus could be more of a threat over a long race stint. He might not be too disappointed if Grosjean loses out to Sebastian Vettel at the start.

Such is the nature of Lotus’s advantage the team would have preferred if Pirelli had brought the tyre allocation used here last year – soft and super-soft – instead of the more conservative soft and medium.

Pirelli motorsport director Paul Hembery reckons one-stop strategies could be possible during the race: “We?óÔéĽÔäóre expecting to see two pit stops tomorrow from what we can tell so far, although the comparatively low wear rate means that some might even attempt a one-stop strategy.”

Drivers lose around 20 seconds coming into the pits to make a stop. Last year Red Bull achieved the quickest turnaround in the pits, taking 19.7 seconds.

In the last three races McLaren have been the quickest crew on the pit lane, which gives Hamilton another reason to feel confident. But the threat of rain will not.

McLaren admit they have not got on top of the demands of the Pirelli tyres in wet conditions. There is a good chance of rain during Sunday’s race, and their rivals will be glued to the radars in the hope it might offer the best chance for them to beat McLaren.

Vettel was surprised at his inability to improve his time in Q3, though he was far from the only driver to have that problem:

“We burned more tyres than we thought in the beginning, so we only had one new set for Q3. The run we had was okay, but I didn?óÔéĽÔäót get the same feeling that I got at the end of Q2, which was a surprise, so we didn?óÔéĽÔäót seem to go with the track and make another step. Romain was in reach, but Lewis was another step.”

Team mate Webber didn’t even make it that far: “I was happy with the car this morning, I was quick in third practice, but I didn?óÔéĽÔäót feel happy on that last set of soft tyres in Q2 and struggled against my scrub time, which is a bit bizarre.

“The field is tight at the moment and it?óÔéĽÔäós disappointing to qualify in11th obviously”

“Q2 was extremely close but we were able to get through. I could have done a better lap in Q3 but I?óÔéĽÔäóm pleased with the result and having both cars in Q3 is great for the team”