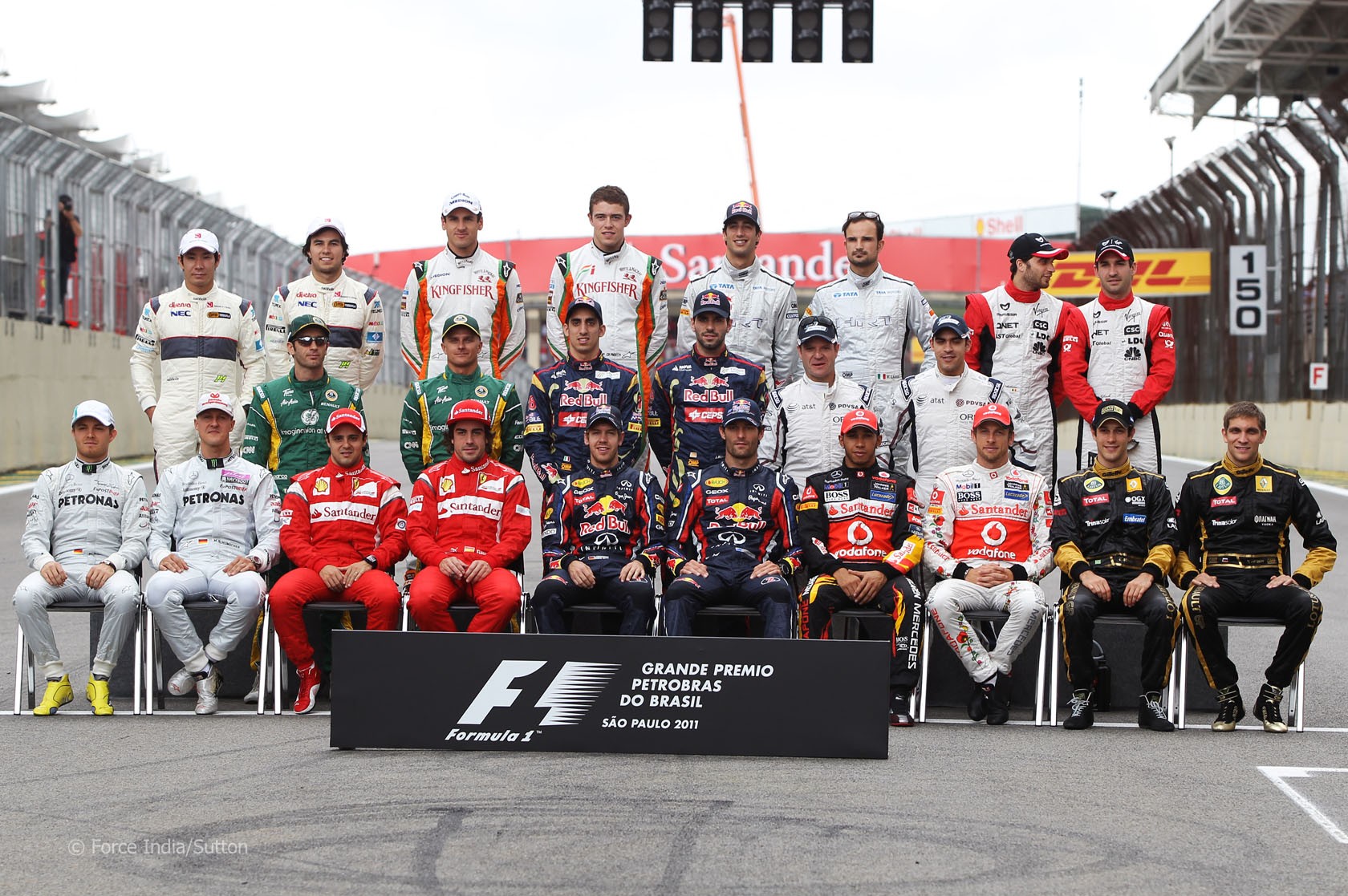 Lots of questions on engines this week plus a tricky one on how many drivers have raced in F1.

Here’s the latest batch of your questions answered. If you’ve got a question for F1 Fanatic, see below for details on how to send it in.

Wimo is disappointed to see F1 engines getting ever smaller: I am just curious on why the F1 engines are sort-of threatened to be reduced in terms of capacity on the next few years, while Moto GP has increased their engines from 800cc up to 1000cc.

It is somehow unfair for F1. If F1 should reduce the engine capacity to achieve lower level emission and fuel efficiency, why doesn’t Moto GP do the same?

I really wish you can write an article about it and enlighten me and other confused F1 fans out there.
Wino

Following the departure of car manufacturers such as Honda, BMW and Toyota in 2008 and 2009, the F1 rule makers’ attention turned to how they can be enticed back and new manufacturers encouraged to enter.

The trend for smaller engines doesn’t just extend to family run-arounds but performance cars as well. For example, BMW fitted their previous M5 with a delicious-sounding V10, and introduced it in 2005 when F1 engines last used the same configuration. But the current M5 has been downsized to a V8.

With road car engine technology focussed on extracting more performance with greater efficiency from smaller engine sizes, it’s logical for F1 to follow the same path. But, for whatever reason, it has not been sufficient to bring new manufacturers into F1.

Indeed, with doubts over the future of Cosworth’s engine programme, and PURE halting their development of a 2014-specification engine, F1 may have fewer engine suppliers in two years’ time than it does today.

I don’t know enough about the situation in Moto GP to comment on that but I’m sure a few readers will be able to give you more information on it below.

Speaking of the forthcoming change in engine rules, Crispin has this question:

I was quite interested in whether the regulations for F1 (in I believe 2014) specifically say the engine has to be a V6 turbocharged engine?
Crispin Zuercher

Yes they do – the new engines rules, agreed in June last year, are quite restrictive. Here’s the relevant details from the 2014 Technical Regulations:

5.1.2 Engine cubic capacity must not exceed 1600cc.
5.1.3 Crankshaft rotational speed must not exceed 15000rpm.
[…]
5.1.6 Pressure charging may only be effected by the use of a sole single stage compressor linked to a sole single stage exhaust turbine by a common shaft parallel to the engine crankshaft and within 25mm of the car centre line. An electrical motor generator (MGUH) may be directly coupled to the same shaft.
5.1.7 All engines must have six cylinders arranged in a 90-degree “V” configuration and the normal section of each cylinder must be circular.

You can read the regulations in full here (PDF).

I am a final year mechanical engineering student. I have taken Kinetic Energy Recovery System as my topic for my seminar. I would like to know its working details to its full depth, especially how the braking energy is stored. Kindly do provide me with necessary details.
Sohil Varghese Samson

The current KERS rules are much the same as they were when KERS first appeared in F1 in 2009, so we’ve not had many new articles about the technology on the site since then.

Here’s a selection of earlier articles on the topic, which includes details on both electrical and mechanical KERS, the latter never raced in F1, as well as some of the other areas where F1 teams have used KERS technology. Good luck with your seminar!

How many F1 drivers? Finally, Leif writes in with a short question that’s going to get a long answer:

This looks fairly straightforward at first glance, but once you get into it you discover it’s rather more complicated than seems.

Today ‘Formula 1’ and ‘the world championship’ are synonymous. But, as many readers will appreciate, that hasn’t always been the case.

For example, there used to be non-championship Formula 1 races. And some races run to non-F1 regulations have counted towards the world championship, such as the 1950-1960 Indianapolis 500s, and every round of the 1952-1953 seasons, which were run to Formula 2 rules.

So do we count drivers of these races as people who have driven in Formula 1?

And what of drivers who have driven at F1 race weekends but have not raced – such as Jules Bianchi, Valtteri Bottas, Alexander Rossi, Giedo van der Garde and Dani Clos, all of which have done so this year?

So let’s refine the question and come up with a version that’s more straightforward to answer and hopefully gives Leif the information he was looking for: How many drivers have competed in races which counted towards the world championship?

I’ve compiled a lot of statistics of my own for use on F1 Fanatic but they aren’t sufficiently complete to answer this so I chose two statistics sites to look up an answer: Forix (subscription required) reckons there are 743, while Stats F1 put the figure at 735.

Why does one have eight more than the other? Seven of the drivers who have been excluded by Stats F1 only started F1 races in F2 cars on occasions when this was allowed, including the 1957 German and 1958 German and Moroccan Grands Prix.

They include Robert la Caze, the only Moroccan driver credited with starting an F1 race at his home Grand Prix in 1958. The other six drivers not counted because of this are Paul England, Christian Goethals, Francois Picard, Tom Bridger, Andre Guelfi and Dick Gibson.

That’s seven of the missing eight accounted for. What of the final driver? This is even more curious: Bernd Nacke appears on Forix but not on Stats F1. Several other sources confirm Bernd Nacke did start the 1952 German Grand Prix in a BMW and retired after five laps.

Nacke returned the following year but this time he did so under his real name: Gunther Bechem. While Forix lists them as separate drivers (while noting one is a pseudonym for the other), Stats F1 groups both their appearances under Gunther Bechem.

So including the seven drivers who started F1 races in F2 cars, and recognising that Gunther Bechem and Bernd Nacke are the same person, I reckon the number of drivers who have started races which counted towards the world championship is 742.

But it wouldn’t surprise me if there are a few more curiosities lurking in the data I haven’t seen yet. If you spot any further information of use in answering this or any of the other questions, please post it below.