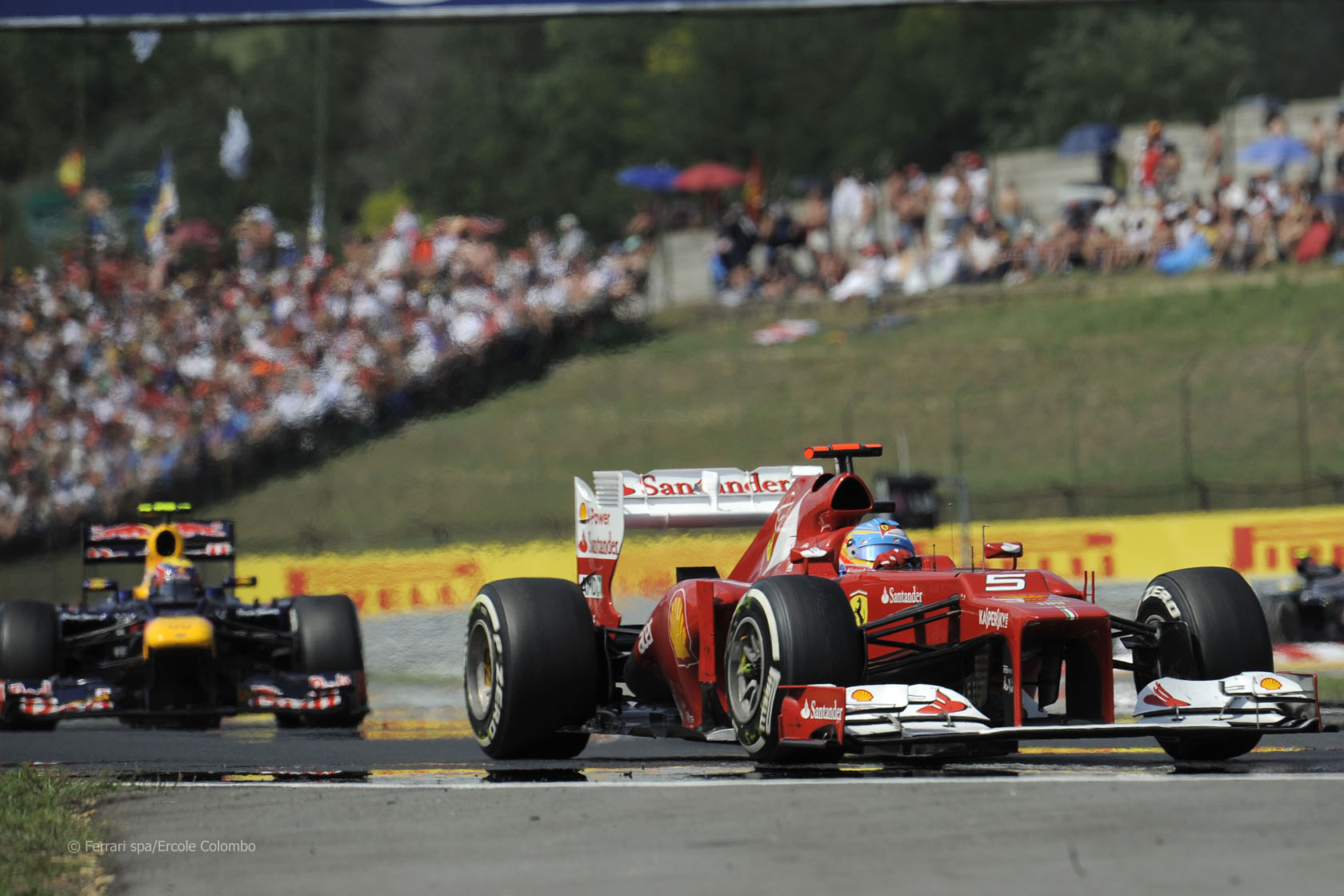 F1 is set for a frenetic end to the season with nine races crammed into 13 weekends.

These races will decide the outcome of the world championships, currently led by Fernando Alonso and Red Bull.

Both have some rapid rivals behind them who are getting within striking range. Can they hold on to claim the titles – or will there be more changes at the top before the year is out?

Alonso’s advantage is less than half that at the same stage this year. He has a 40-point margin over second place which once again is occupied by Webber. There is a maximum of 225 points available over the remaining races.

This chart shows drivers?óÔéĽÔäó scores throughout the season. Use the controls below to show/hide different drivers:

Alonso has rarely failed to get the most out of the Ferrari. Since the beginning of the European season the F2012 is much-improved and, though still not the fastest car, is a strong all-rounder. The well-drilled Ferrari team have turned out some excellent pit stops.

But if one of his better-equipped rivals emerges from the pack as a consistent challenger, he may yet be kept from a third world championship.

When the season began, just 11% of readers tipped Webber to out-score Vettel. He has done so far but in recent races the momentum has been with his team mate.

Unlucky not to win in Valencia and doubly so that Alonso picked up the victory. But his car remains more than a match for the Ferrari on pure pace and gives him the chance to grind down Alonso’s lead in the coming races.

Winning in Hungary was a vital boost to his championship credentials. Like Vettel, he will need to score consistently better than Alonso in the coming races to get back in the hunt, but that’s not always been a feature of his title campaigns.

The 2007 champion is a fascinating dark horse in the title race. There is much expectation that Lotus, armed with their new double DRS, will finally come good this weekend and deliver their overdue first win of 2012. That and the E20’s kindness to its tyres could prove significant weapons in Raikkonen’s arsenal.

Red Bull hold a 53-point lead in the teams’ title race with 387 still to be won.

This chart shows teams?óÔéĽÔäó scores throughout the season. Use the controls below to show/hide different teams.

Red Bull’s situation in the constructors’ championship is akin to Alonso’s in the drivers’ title race. They have a healthy lead but not enough to relax and they could do with their closest rivals takings points off each other in the coming races.

Their key strength is that both drivers have been consistently scoring decent points, with just three no-scores between them. It’s 14 years since McLaren last won the constructors’ championship and you sense they are aching to end that streak. Especially as they’ve been second on seven occasions in that time (and not forgetting 2007 as well).

Going into the summer break McLaren had sorted out their pit stop problems and made a major performance gain with their last upgrade. If they return to action as competitive as they were at the end of July, with Jenson Button seemingly recovered from his early-season slump, they should be Red Bull’s closest challengers.

Lotus have done everything but win a race so far this year – they’ve even had both drivers on the podium on two separate occasions. Third place is already in excess of their pre-season aims, but that’s not going to stop them aiming even higher.

Ferrari are fourth in the constructors’ championship while Alonso leads the drivers’ title. That is a credit to Alonso’s driving and a damning indictment of Felipe Massa’s.

If Massa can increase his contribution to their points tally (currently just 13%) they should make progress. It may even save his place at the team for next year, though it’s hard to believe it isn’t already too late for that.