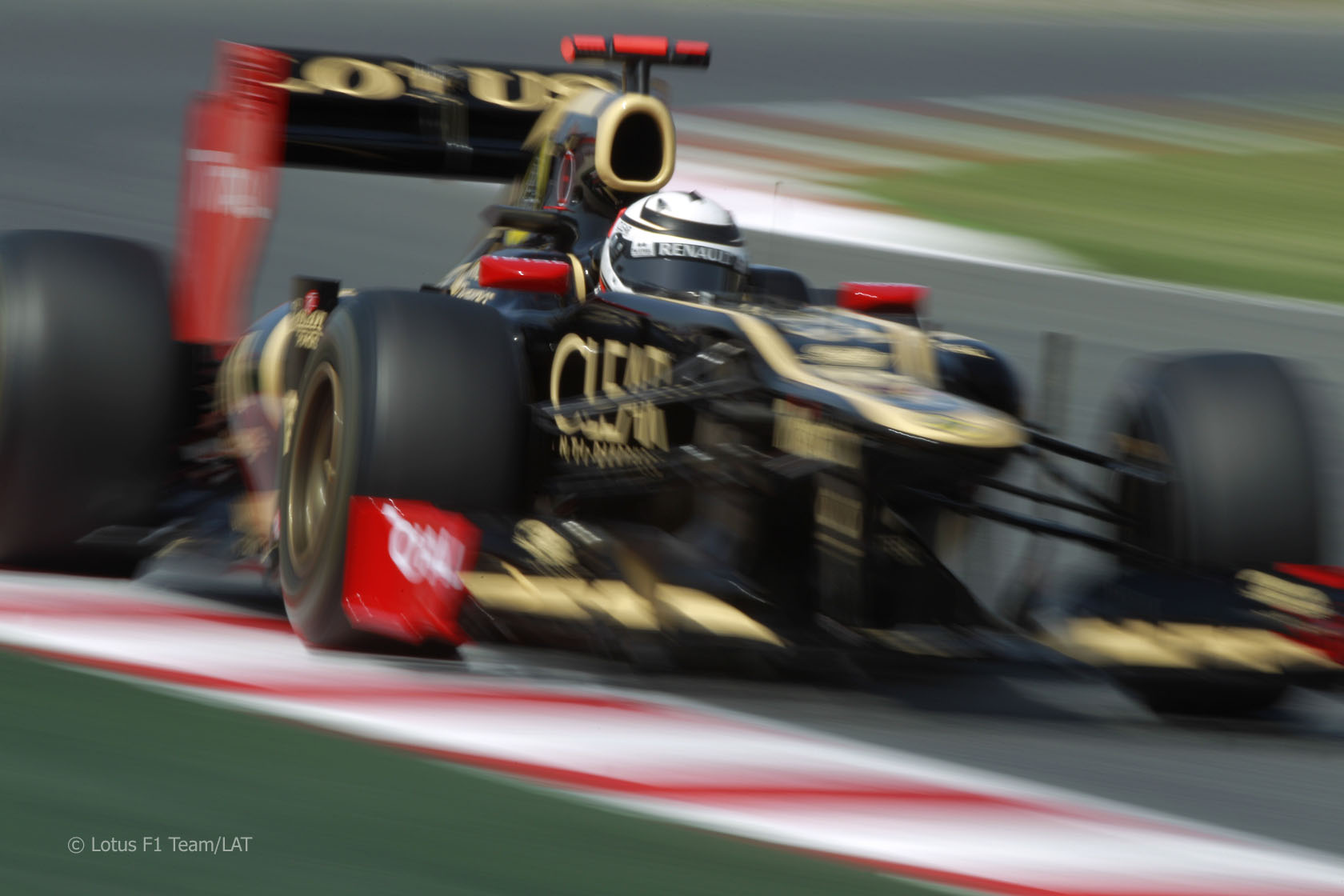 It may have been a longer summer break than usual but we now have incredibly busy end to the world championship in front of us.

The three months ahead are crammed with F1 races including four pairs of back-to-back Grands Prix. The nine rounds that will decide the title are packed into just 13 weeks.

It kicks off with two tracks that remind us why we love Formula 1. Spa-Francorchamps and Monza are the two fastest tracks in F1 and both date back to the inception of the world championship.

“Spa is the daddy of them all, one of the all-time great Grand Prix tracks,” Jenson Button enthused, “and Monza is one of the most historic and evocative circuits on the calendar”.

The home of the Belgian Grand Prix has recently been confirmed on the F1 calendar for three more years, and that’s definitely something to celebrate. Spa is a thrilling circuit and dozens of F1 Fanatic readers are heading there for this weekend’s race.

Last year the Red Bull drivers romped to a one-two victory. Mark Webber made the Pass of the Year as he bravely dived past Fernando Alonso on the entry to Eau Rouge.

But Alonso took the place back on the very next lap with a straightforward pass in the DRS zone. It was one of several ‘motorway-style’ passes seen during the race which has led the FIA to shorten the zone by 50 metres this year.

The ban on using DRS through Eau Rouge – effective throughout the weekend – remains unchanged. The limited run-off at the corner prompted the move last year.

The FIA’s concern is that some drivers may be tempted to try using DRS in the corner. But the high speed and limited space in the corner would leave them with no room to correct a mistake. That could lead to a major crash such as that suffered by Fabio Leimer in GP2 last year.

What has changed for this year is the tyre allocation. Pirelli are bringing their hardest tyre mix – medium and hard – instead of the soft/medium combination used in 2011.

Both Red Bull drivers made their first pit stops within the first five laps last year due to tyre damage caused by running camber angles beyond the upper limits recommended by Pirelli. Those limits have since been made mandatory which, along with the harder compounds, should prevent a repeat.

Last year Red Bull surprised everyone by winning comfortably at a track which, on paper, was expect not to suit their car well.

The RB8 has exhibited much the same characteristics of its predecessors: all that downforce comes with a loss of straightline speed. They’ve been among the slowest through the traps this year. But that may not matter if they can plant their cars on the front row. McLaren went into the summer break as the team to beat and aim to pick up where they left off.

“My win in Hungary was a fantastic way to go into the summer break,” said Lewis Hamilton. “It had the added bonus of sending the whole team away for their holidays with a positive feeling in their hearts.

“It?óÔé¼Ôäós also given me the hope and assurance that we can come back for the final nine races with a real chance to go for both world championships.”

But they may be concerned by the early forecast suggestions of rain. The team have not had as much success getting the MP4-27 to work on intermediate and wet weather tyres.

The prospect of rain will certainly put a smile on Fernando Alonso’s face. The F2012 may be much-improved but it’s not quite a match for the quickest cars on pure pace in normal conditions yet.

But as we saw in Malaysia (in the race), Britain and Germany (in qualifying), Alonso can be relied upon to deliver when the conditions are less than perfect.

Michael Schumacher reaches a landmark 300th participation in a race weekend at Spa. It is a special circuit for him, scene of his first Grand Prix, first win, and final championship triumph.

He can usually be relied upon to produce something special here. Last year he charged from last on the grid to finish fifth.

Having begun 2012 on a high with victory in China, Mercedes have slipped back into the midfield. But the strength of their engine allied to their innovative Double DRS may prove their saving grace at high-speed Spa. There are several reasons to keep an eye on Lotus’s progress this weekend – not least Kimi Raikkonen’s superb record at Spa, with four wins in his last five appearances here.

The team are expected to finally race their version of the Double DRS, which has appeared on their cars in practice at the last two Grands Prix.

Their E20 has shown superb race pace. Both Raikkonen and Romain Grosjean put Hamilton under pressure for victory in Hungary and although neither was able to pass, that is likely to be less of a problem in Belgium.

With their excellent race pace and improving qualifying performances, Lotus are surely overdue a win. But the conservative choice of tyre compounds for this race may not play to their strengths.

Team principal Vijay Mallya has set his team the target of taking back the sixth in the championship they finished last year. That will mean consistently out-scoring Sauber and Williams in the second half of the year.

That looks like a tall order but Paul di Resta is confident in the car’s potential.

Sergio Perez has high hopes for this weekend: “I believe the fast circuit in the Ardennes will suit our car.

“We should get everything right there and make sure we start into a productive second part of the season. Last year I qualified ninth there, but retired in the race. In what will be my second Formula One Grand Prix in Spa I want to at least score points.”

Toro Rosso are dropping off the tail of the midfield and are in a state of flux as technical director Giorgio Ascanelli has left the team and his replacement – expected to be ex-Sauber man James Key – is yet to be confirmed.

That’s not going to help their situation as they increasingly come under threat from Caterham.

The contest between the Williams drivers is entering an interesting phase. Bruno Senna showed a noticeable improvement at Hungary, and from this point on he is racing on tracks he competed at with Renault last year.

Pastor Maldonado has decisively held the upper hand on pace so far this year but needs to stop crashing into people. Worryingly, he couldn’t even make it through the summer break without hitting something. Caterham’s summer break was occupied with their move to a new base at Leafield, formerly home to Super Aguri. Despite the upheaval and the mandatory two-week factory closure all the teams have observed, the team will have some tweaks for the CT01 this weekend.

Technical director Mark Smith said: “Obviously we could not work on the car during the August break, but before and after the holiday we have been working on a slightly revised exhaust layout and a number of small aero updates to areas like the brake ducts.”

The team aim to bring more steps forward after Monza: “For Singapore we have some new parts that will be run for the first time when we head back to the Far East.

“We will then be bringing updates to every race until the end of the season and while the refurbishment program at Leafield may create a few technical and logistical challenges in our update schedule, we already have plans in place to work around any issues that may crop up, and are determined to fight until the last lap of the last race of the season.”

HRT will revert to the medium-downforce package used in Canada, though hopefully without a repeat of the braking problems that forced them to retire both cars in that race.

Charles Pic has had a good start to his first F1 season and hopes to build on it: “I ended the first part of the season on a strong note, partly due to the team?óÔé¼Ôäós improved performance, and satisfied with my progress so far in my debut season.

“The break has given me time to reflect on those eleven races, which seemed to pass by so quickly, and my plan is to consolidate everything I have learned from the team and the car and wrap it all together to have what I hope will be an even stronger second part of the year.”

Are you going to the Belgium Grand Prix?

If you’re heading to Spa-Francorchamps for this weekend’s race, we want to hear from you.