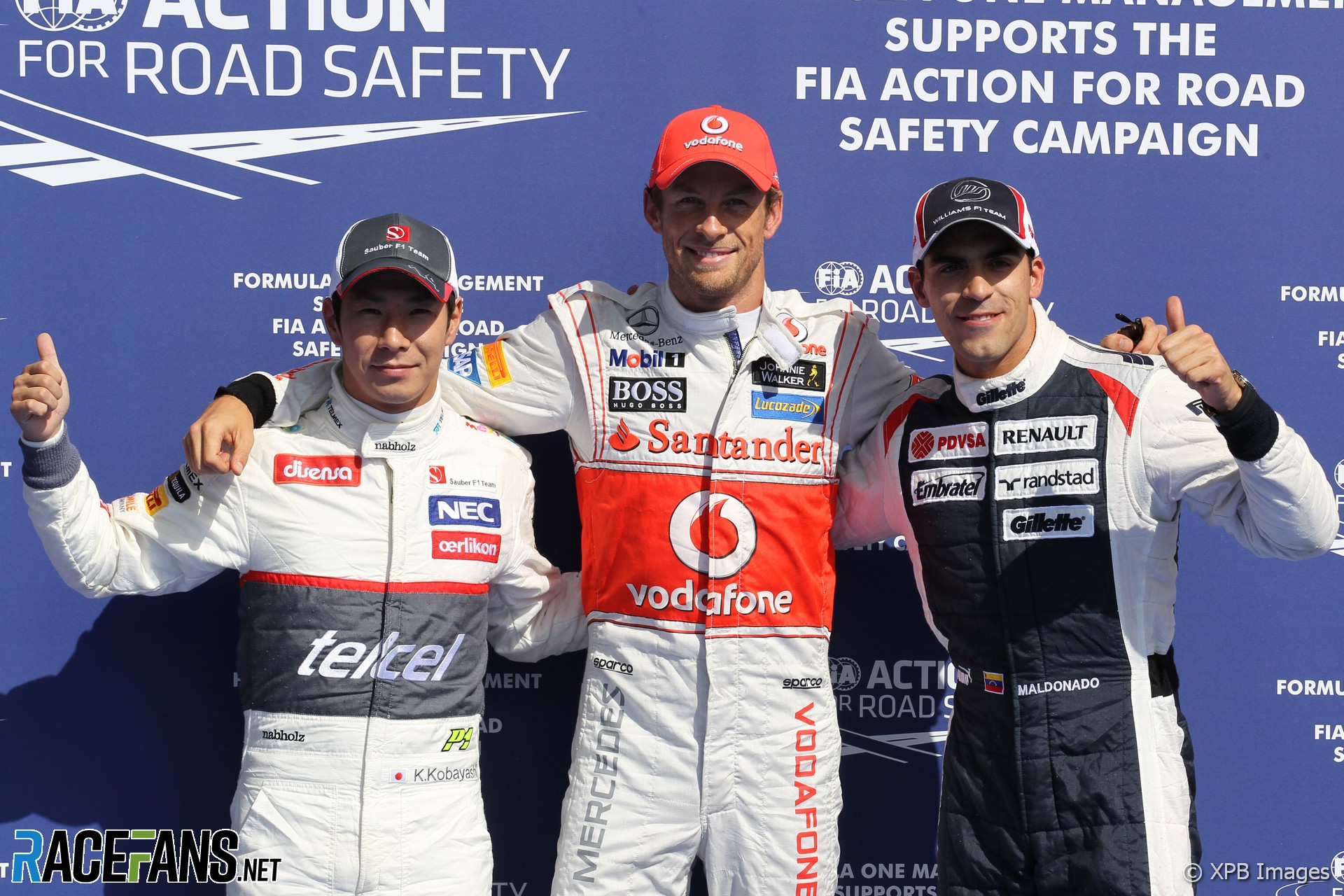 Jenson Button took his first pole position since the 2009 Monaco Grand Prix after an emphatic display at Spa-Francorchamps.

Button took control of the session and was rarely threatened in Q2 and Q3. He duly clinched his first pole position for McLaren in his 50th race with the team.

Sauber’s Kamui Kobayashi will join him on the front row.

Fernando Alonso hit the top of the times to begin with, trading best sectors with Lewis Hamilton. The McLaren driver, running more downforce, was quicker through the middle sector, while Alonso was faster along the long straights in sectors one and two.

However Button beat both their times with his last effort, which proved to be a sign of things to come.

Nico Rosberg had made an early start to Q1 having lost almost all of his running during the sole dry practice session. But it was to no avail: he slipped into 18th place after Daniel Ricciardo improved at the end of the session.

The Mercedes driver crossed the start/finish line a few second too late to begin another lap. “We dropped off too much there,” said his engineer. “We dropped off over nine seconds so we missed the chequered flag.”

Romain Grosjean was fortunate to avoid elimination. The Lotus driver ended up 17th after being held up by Narain Karthikeyan on his final effort.

Sergio Perez was the first driver to head the times in Q2. A series of drivers edged the best time off him including Alonso and Hamilton.

However when Button took to the track he let rip with a 1’47.654, fastest of all in every second and over three-quarters of a second ahead of second-placed Raikkonen.

They were the only two drivers who did not return to the track for another effort in what proved to be an exciting shoot-out for the top ten places.

But the biggest surprise was Vettel. He was tenth as the final laps begin but his final effort was only good enough for 11th place as he fell 0.012s short of Maldonado’s time.

Button picked up where he left off as Q3 began, returning to the top of the times as he and Raikkonen were the first drivers to set laps.

But Hamilton, who had elected not to use McLaren’s new rear wing following practice, made a mistake at Rivage and aborted his first run.

Kamui Kobayashi led the drivers out as they began their final runs. He produced a 1’47.871 good enough for second place – and no one was able to take it off him.

Raikkonen complained of understeer on his last run and fell to fourth behind Maldonado. Perez made it two Saubers in the top five, lining up behind Raikkonen.

Alonso could only manage sixth, over seven-tenths of a second slower than Button. Webber claimed seventh but will drop back with a gearbox change penalty.

That will promote Hamilton who made another mistake at La Source at the beginning of his final run, and unusually ended up well behind his team mate.

104 comments on “Button and Kobayashi share front row at Spa”