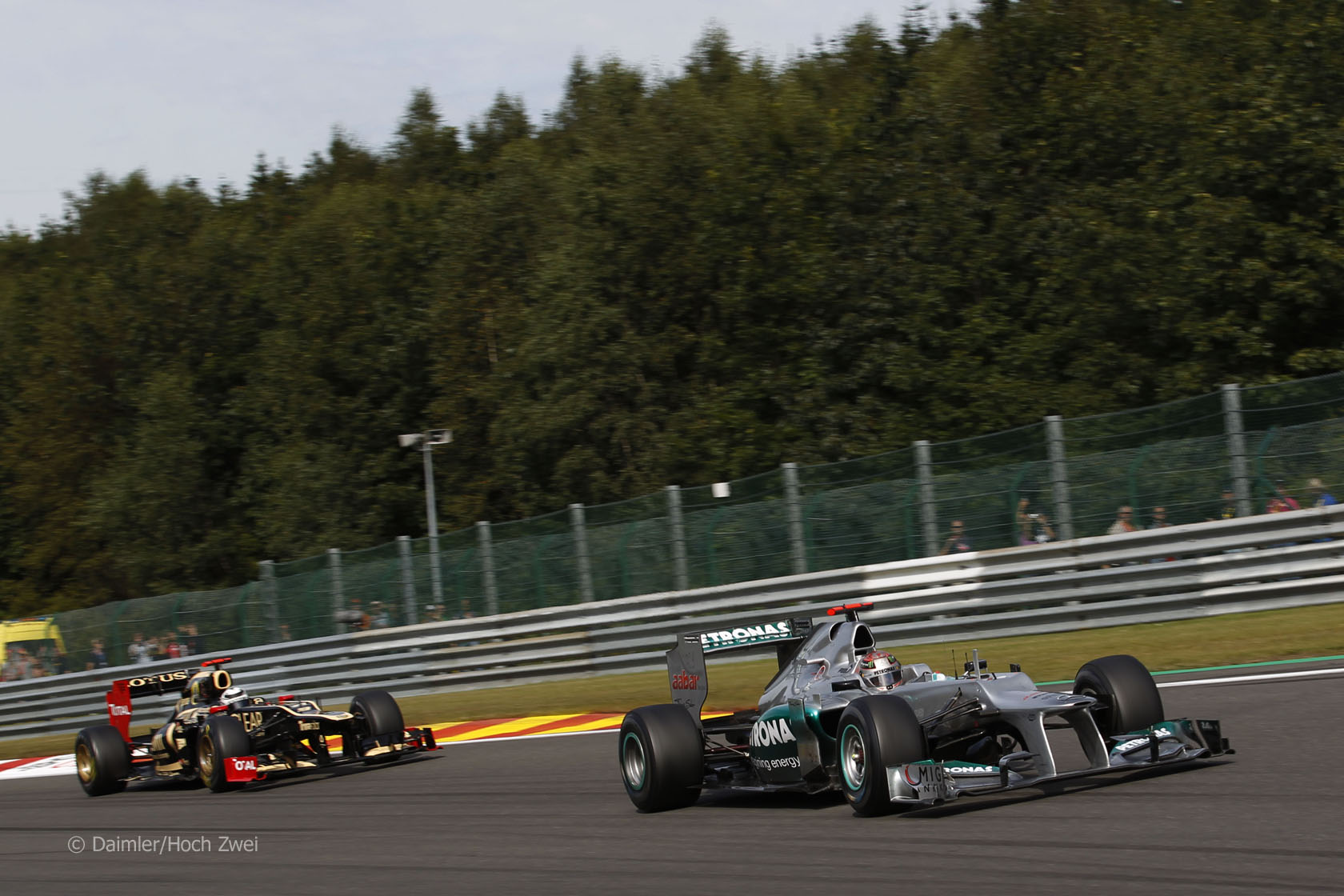 Which F1 driver had the best race weekend in Belgium?

Compare all the drivers’ performances below and vote for who you think was the best driver of the Belgian Grand Prix weekend.

Sebastian Vettel – Missed out on Q3 for the second time this year, by just 0.012s. Held up by the first-corner crash he fell to 12th but passed several cars including his team mate and Felipe Massa. Avoided pitting at the same time as Michael Schumacher and ran long, successfully completing the race with a single stop to take second place.
Mark Webber – Out-qualified Vettel but a gearbox change penalty dropped him back behind. Having got ahead at the start he struggled to slipstream past Senna with his inferior straight-line speed and ended up being passed by Vettel and Massa. Quick-thinking in the pits allowed him to avoid a penalty for an unsafe release.

Jenson Button – Opting to stick with McLaren’s new wing was clearly the right way to go and earned Button his first pole position in three years. He controlled the race from there.
Lewis Hamilton – Struggled with the old wing in qualifying and made a couple of mistakes in Q3 which left him seventh on the grid. Didn’t make a great start but was blameless when he was hit from the left by Grosjean, triggering the first-corner crash.

Fernando Alonso – Did his usual damage limiting job in qualifying but had no chance to do so in the race when he was taken out. His first no-score in 24 races.
Felipe Massa – Gave Ferrari some cheer by salvaging fifth, passing Webber on the way, after qualifying poorly. His lap times at the beginning of his second stint looked particularly encouraging for the team.

Michael Schumacher – In the points at his 300th Grand Prix appearance despite being slowed by a problem with sixth gear. Put a great move on Raikkonen early in the race and hung on doggedly with his DRS later on. Was judged not to have done anything wrong when he pitted while dicing with Vettel.
Nico Rosberg – His weekend was ruined when his car failed five laps into the only dry practice session. A gearbox change and a mis-timed final run in Q1 left him 23rd on the grid. Like his team mate he abandoned his attempt to make a one-stop strategy work. Caught Di Resta at the end but ran out of time to pass him for the final point.

Kimi Raikkonen – Lotus’s promised pace never materialised: Raikkonen started and finished third. The scrapping of the team’s Double DRS ‘device’ after the wet practice didn’t help matters, but the E20’s usual strong race pace was not in evidence. “My car wasn?óÔéĽÔäót great all weekend and we couldn?óÔéĽÔäót find a competitive setup,” he said. “On new tyres it was okay, but we had to use a lot of downforce to prevent sliding. ”
Romain Grosjean – Said his collision with Hamilton was an honest mistake arising from his mistaken belief he was completely ahead of the McLaren. That he admitted the error and accepted his punishment is to his credit, but it wasn’t his first such collision this year and his one-race ban will surely impress upon him the need to be more careful in future. There are other drivers who need to learn the same lesson. Paul di Resta – Elevated to fourth by the first-lap crash but knew from the start he faced a tough race without KERS. This made him an easy target for several drivers and he ended up slipping to tenth.
Nico Hulkenberg – Started on hard tyres and impressively passed Raikkonen after the restart to run second. He couldn’t keep the Lotus behind on raw pace, nor Vettel’s one-stopping Red Bull, but he raced well with Schumacher and hung on for a career-best fourth.

Kamui Kobayashi – An excellent qualifying performance turned out to be for naught. Managed to finish the race despite a significant amount of damage to his car.
Sergio Perez – Third place was on the cards in qualifying had he repeated his Q2 time in Q3 – as it was he started fourth. Was also eliminated in the Grosjean crash.

Daniel Ricciardo – Ricciardo moved up to sixth after the crash then passed Di Resta for fifth. But his pace slackened when he switched to hard tyres for his last two stints and he was passed by Vergne. Nonetheless, he equalled his best result so far with ninth.
Jean-Eric Vergne – His engine went into anti-stall at the start which proved to be a blessing in disguise as it kept him out of the first corner melee. He emerged in seventh behind Ricciardo. Lost time behind Rosberg on two occasions but nipped past his team mate to take eighth.

Pastor Maldonado – Qualified third but a penalty for impeding Hulkenberg dropped him to sixth. His jump start evoked memories of Olivier Grouillard’s 20 years ago. It put him in the firing line of the first-corner crash, and although he was able to keep going he then crashed into Glock at the restart ending his race. He picked up three penalties in one weekend and carries two of them on to Monza.
Bruno Senna – Spun in qualifying, damaging his front wing and ending up 17th on the grid. Was coming under pressure from the Toro Rossos for eighth when a slow puncture forced a pit stop which dropped him out of the points. Heikki Kovalainen – Had a scruffy race including a spin and a half-spin at Pouhon. A slow getaway from his first pit stop led to him clipping Narain Karthikeyan’s HRT. The team were fined ?óÔÇÜ?Ľ10,000.
Vitaly Petrov – Finished 14th despite a slow first pit stop.

Pedro de la Rosa – Comfortably ahead of his team mate as usual, he fell behind the delayed Kovalainen three laps from the end and finished last.
Narain Karthikeyan – Moved up to 14th at the start before slipping behind the Caterhams and Kobayashi. Might have had a chance of beating de la Rosa but he crashed out at Stavelot when his front-left wheel came off after the nut had been cross-threaded during his pit stop.

Timo Glock – Pronounced himself “very happy” after taking 15th following a spirited dice with his team mate. Glock was especially pleased with Marussia’s upgrade: “It was great to be really ‘racing’ again after some very positive steps forward for the team. Not only have we brought some strong updates to the car, the team have worked really hard to get on top of the problem I experienced in the last few races and here it looked positive.” Team principal John Booth felt Glock would have had an even better race had he not been hit by Maldonado at the restart.
Charles Pic – The only driver apart from the top two finishers to complete the race with a single stop, Pic said he struggled with tyre degradation.

Who was the best driver of the Belgian Grand Prix weekend?

Don’t forget to vote in the Rate the Race poll as well: