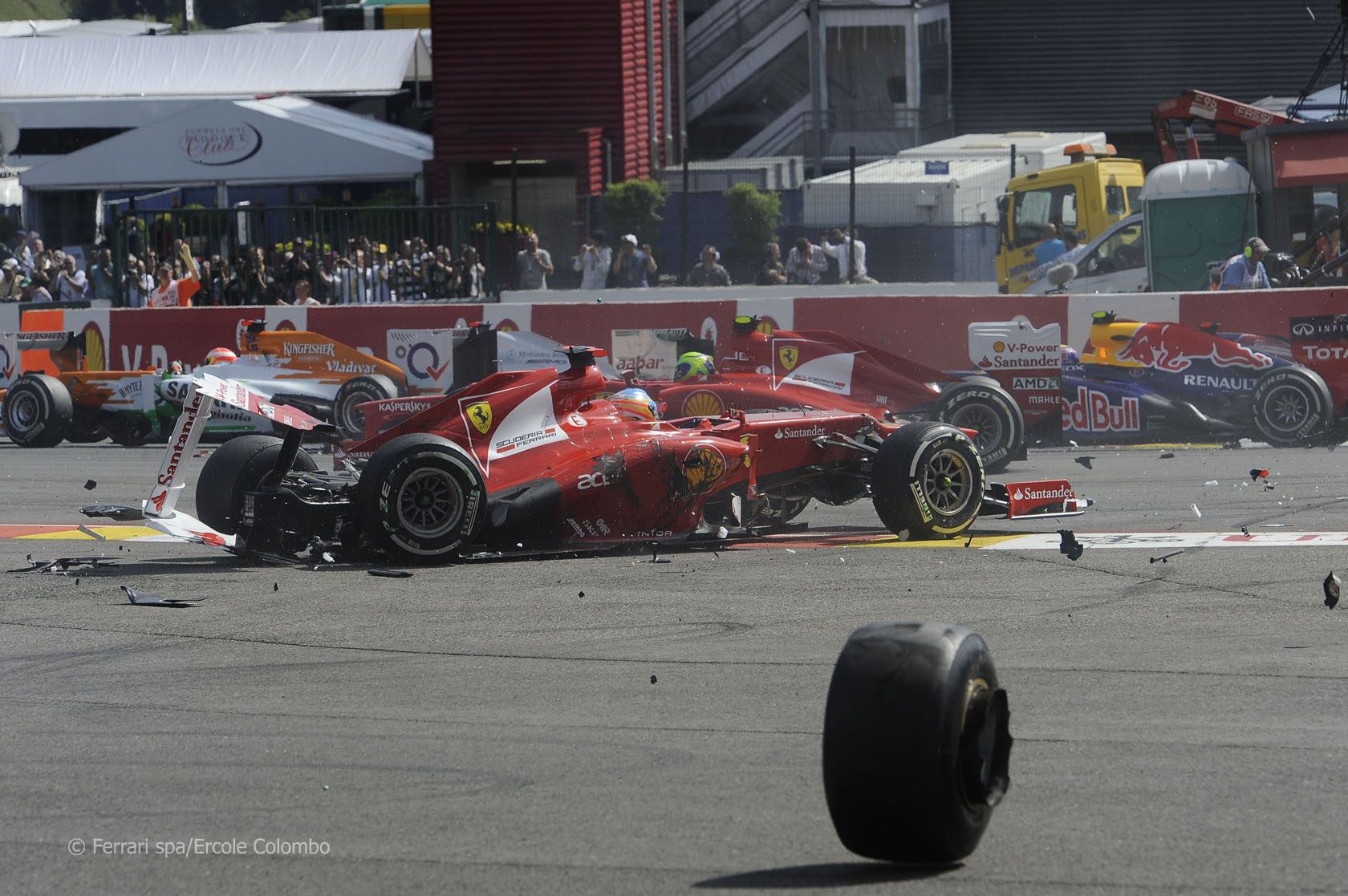 In the round-up: Ferrari team principal Stefano Domenicali calls for action on driving standards after Romain Grosjean is banned for one race for causing a crash.

“As for the accident, I can only say that the judgement falls to the FIA: what is certain is that, it would be better if, starting with the junior formulae, rules relating to on-track behaviour were enforced in an inflexible manner, so as to have drivers as well prepared as possible when they reach this, the highest level of motor sport.”

“‘Ecclestone told BBC Sport: “I’m sorry that he’s leaving us not being a winner, because he is a winner.’ But asked if he knew Schumacher, whose deal ends at the end of the year, would quit Ecclestone said: ‘I don’t know.'”

Hamilton calm after crash (The Telegraph)

“Who cares what I think, what you think and what he thinks. It will probably come up at the drivers?¾įķ╝įõ¾ briefing [at Monza] but I won?¾įķ╝įõ¾t say anything about it. I am just going to refocus on the next race.”

“It looked scary, didn’t it? It just reminds us… we become slightly nonchalant. We see so many big enormous shunts and we are just used to the driver hopping out. Fortunately on this occasion he did. You realise that they come inches away from not hopping out of the car on those incidents so…fortunate for him and the sport that we got away with a big accident today.”

On his battle with Michael Schumacher: “He, we were both pretty much on the limit and he is a wily fox and doesn?¾įķ╝įõ¾t give you a lot of space. But that is the fun in fighting with him. I don?¾įķ╝įõ¾t have any problem with that. I believe that the whole situation stemmed from a misunderstanding. He wanted to pit and I didn?¾įķ╝įõ¾t. So the message is that nobody is to blame. And thank god we both got away with it.”

Narain Karthikeyan: “Something went wrong with the pit stop. The bolt was cross-threaded and then it came off. I was lucky it didn’t come off at Eau Rouge or something like that.”

Woo great to be back in the points! Very eventful race, would have loved to finish further up but take what we can for now! Bring on Monza!

Well that was a hard day, No KERS for whole race. Got told before the start, but a good day for the team with a double points finish.

Front-left nut got cross threaded at the second stop and the wheel came off at T13 of all places.. Can still feel the impact!

I can say that it was a good Sunday despite all… pic.twitter.com/jpx55bDr

Romain Grosjean’s one-race ban provoked a lot of comments. Here are two I found most interesting:

While it may seem inconsistent, I think the stewards are getting fed up with the cumulative effect of some of the younger drivers?¾įķ╝įõ¾ aggressive errors taking out other people, and want to make a statement to put everyone on notice for the rest of the season.

Yes, judicially speaking, the result may be viewed by some (or many) as “inconsistent”, but there is value in setting an example when you?¾įķ╝įõ¾ve had enough, if you feel you may be losing control of the situation. Even at the expense of an idealistic idea of fairness, no matter how warranted.

These “errors” are being caused by over-optimism, lack of caution, over-aggressiveness, lack of respect for fellow drivers, all of which have emotional bases. To reset emotional baselines you sometimes need the nuclear option, even if one driver gets dealt with a bit differently than a previous one.
@Slowhands

So, basically you can crash as much as you want in the back of the field? Just take out Alonso/other ?¾įķ╝?¶championship contender?¾įķ╝?ž and you?¾įķ╝įõ¾re banned? Should be equal rules for everyone?¾įķ╝?¬
@KaIIe

Giuseppe Farina became the first ever winner of the world championship on this day in 1950.

Team mate and title rival Juan Manuel Fangio led from pole position but his car failed and so did that of Piero Taruffi, whose car he took over:

That left Farina to win ahead of Alberto Ascari, who took over Dorino Serafini’s car, and Luigi Fagioli.