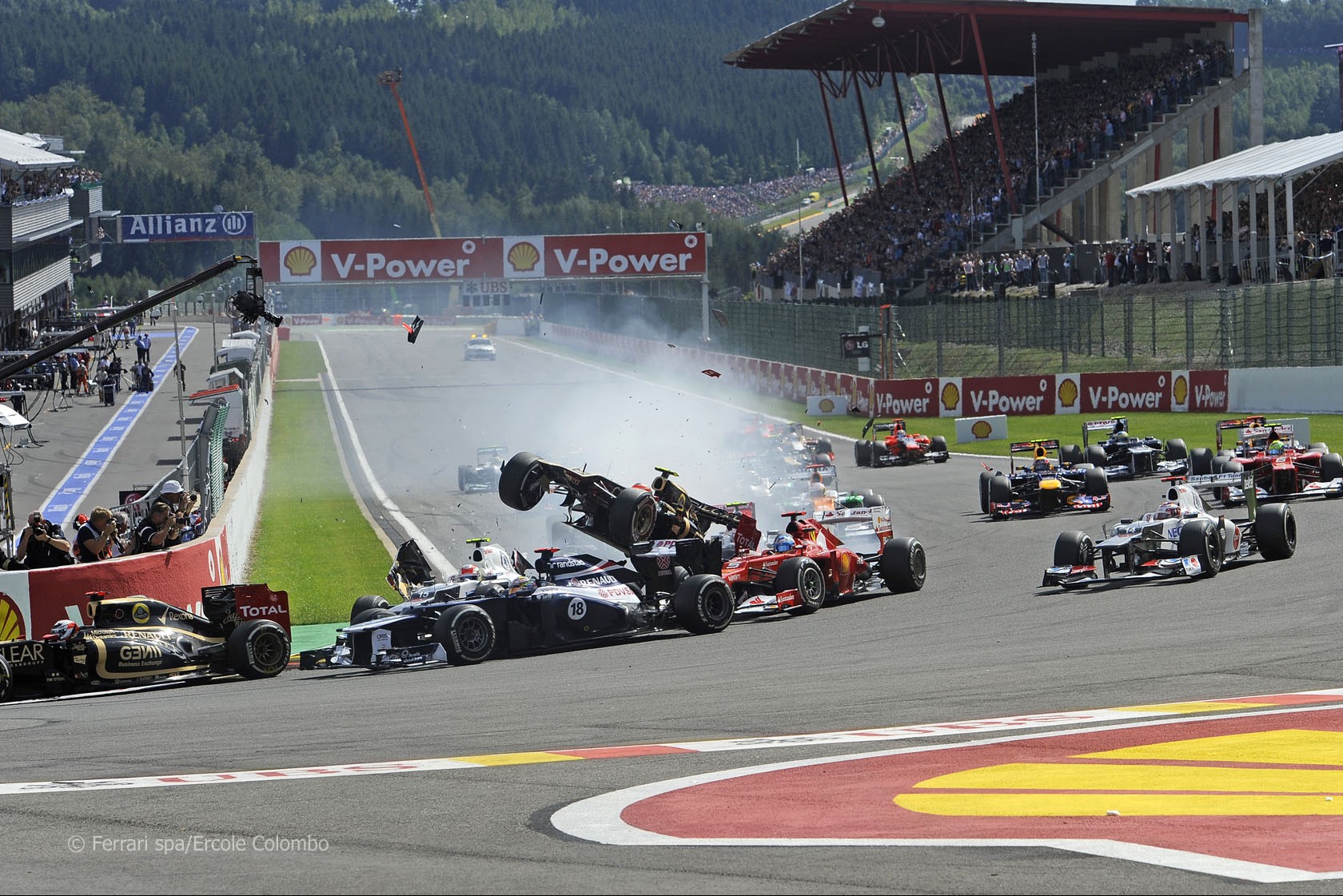 Ten of the best pictures from the Belgian Grand Prix which tell the story of the race. Friday practice was a complete washout. It rained almost without cease during and between the two practice sessions. Not a single driver ventured out in the first half of second practice.

That didn’t stop Ferrari from trying to do some testing, but you have to wonder how much of the flow-vis was washed off Fernando Alonso’s rear wing. Has Michael Schumacher scaled Eau Rouge for the last time? Bernie Ecclestone cast doubt on the six-times Belgian Grand Prix winner’s future during the build-up to the race.

Ecclestone told the BBC: “I’m sorry that he’s leaving us not being a winner, because he is a winner.” Jenson Button had waited three years and four months since his last pole position. It finally came after a superb performance in qualifying which included three laps quick enough for first on the grid – despite this lock-up. A glance at Hamilton’s rear wing tells the story of what happened to him on Saturday. Unhappy with the feel of his car using McLaren’s new wing, Hamilton opted to stick with the usual one.

But he was much slower and qualified eighth on the grid, which became seventh after Mark Webber’s penalty. Would his set-up have worked better in the race? Because of what happened in the next picture, we’ll never know. Romain Grosjean swiped into the side of Hamilton’s car at the start and the resulting crash eliminated both of them plus Sergio Perez and Alonso. The latter was fortunate to escape injury as Grosjean’s car landed on the front of his. Bruno Senna emerged from the first-lap carnage in front of the two Red Bulls. Webber had a difficult time passing the Williams on the straight, but Sebastian Vettel found a way by after dispensing with his team mate. Note the video wall on the left showing the view from Webber’s onboard camera.

Senna was holding on to a points position when he suffered a puncture with five laps to go. Schumacher was at his usual Spa best during the race, dicing with Kimi Raikkonen and Sebastian Vettel. He later slipped to seventh at the flag (where he has finished three of the last four races) after losing sixth gear. The Marussia drivers closed the gap to Caterham with their Spa upgrade but weren’t quick enough to beat them.

Charles Pic headed the times sheets after the washed-out second practice session as only ten drivers set times as they drove from the pits to do practice starts at the end of the session. The podium ceremony was conducted by Belgium’s most successful F1 driver. Jacky Ickx is an eight-times Grand Prix winner and two-times world championship runner-up, as well as the second most successful driver in the Le Mans 24 Hours, with six victories.

But although his credentials as a great of the sport are impeccable (vastly better than Placido Domingo’s) Ickx’s rather stilted quizzing of the drivers leant weight to the suggestion that the new podium interviews would be better handled by a media professional. Things are looking up for Button after his second win of the year, but he remains 63 points behind championship leader Alonso.

Were you at Spa-Francorchamps last weekend? Share your pictures and video from the Belgian Grand Prix here: