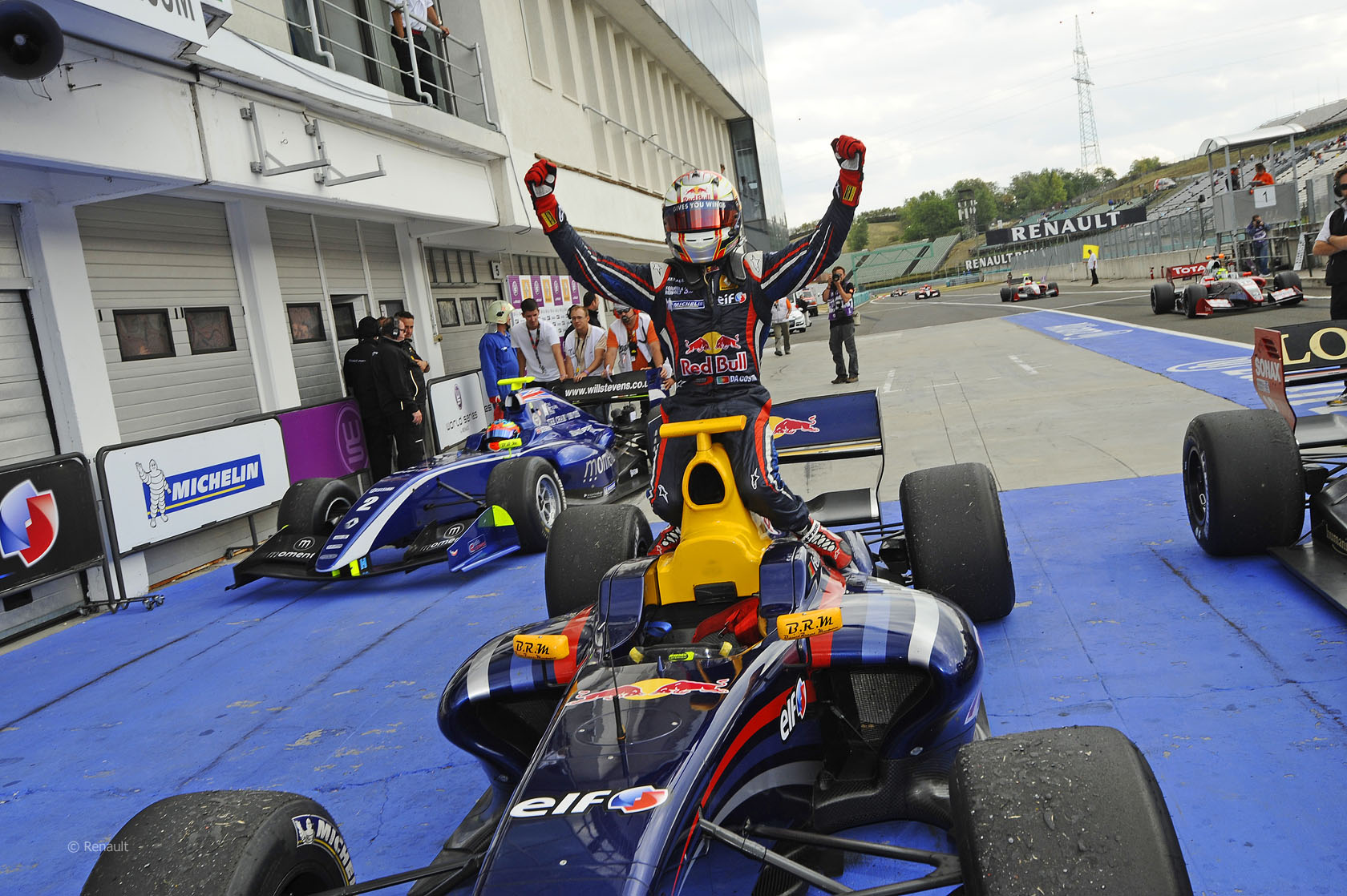 With the F1 driver market in a state of flux, the time is ripe for hopeful young drivers to stake their claim for a place on the grid.

The Portuguese 21-year-old Antonio Felix da Costa is doing an excellent job of that at the moment, having raced in GP3 and Formula Renault 3.5 this season.

Da Costa retuned to GP3 this year having placed 13th in the series in 2011. But early in the season the Red Bull development driver was called up to race in Formula Renault 3.5.

Red Bull’s young driver programme has a reputation for being quick to drop those no longer considered up to scratch. Lewis Williamson’s ejection from the Arden Caterham squad just five races into the season seemed particularly harsh given the team’s compromised testing programme.

But that tough break for Williamson handed Da Costa an opportunity which he has seized with both hands. The 250bhp step up from GP3 to the 530bhp Formula Renault 3.5 car fazed him not a jot – he tested it on the day before heading to the Nurburgring for his debut. He brought the car home in the points in his first race.

Da Costa was thrilled by his Red Bull break: “It’s a little miracle,” he told ESPN at the Nurburgring.

“I’m really thankful to the opportunity. To be honest I think it’s every driver’s dream to be part of this programme because Red Bull is the new team, everyone wants to be in F1, they arrive, they win. So I can only be really thankful and I’ve going to drive it so hard to deserve it.”

It was a return to a paddock he knows well, having come close to winning the Formula Renault 2.0 Eurocup title in 2009. He finished third, level on points with Jean-Eric Vergne, having been disqualified from both races at the Nurburgring due to a technical infringement.

He continued racing in GP3 and after a shaky start to the season was in with a chance of claiming the title in the final race. His early progress was stymied by a series of penalties: some which were not his fault (insufficient brake pad thickness sent him to the back of the grid in Valencia), some which weren’t (jumping the grid in Barcelona).

But he won both races in Hungary – becoming the only driver to do so all year – which put him in content for the championship. His second was a particularly inspired performance in wet conditions, won by a well-timed switch to slick tyres that Jenson Button would have been proud of.

He was in the running for the championship at Monza but it wasn’t to be. His car jammed in sixth gear during the first race, leaving him to finish 15th on the race and third in the championship. Da Costa has been especially impressive in Formula Renault 3.5. He has outshone his more experienced team mate Alexander Rossi and finished the last six races in the top five, out-scoring every other driver in the field.

This in a series which has a legitimate claim to have eclipsed GP2 as the best ‘final step’ before F1. The new generation cars are quicker than their GP2 counterparts and top talents such as Jules Bianchi and Sam Bird switched series over the winter to drive them.

Da Costa served notice of intentions by making it onto the podium at Silverstone in his sixth start, thanks to a gutsy pass on championship protagonists Bianchi and Robin Frijns in the high-speed Copse corner.

He followed that up with a maiden victory at his happy hunting ground: the Hungaroring. A good start moved him up to second, leaving him perfectly placed to steal victory from Kevin Magnussen whose car failed on the final lap.

Da Costa made it back-to-back wins at Paul Ricard last weekend, prevailing in a supremely tough rain-hit race. He led the second race too, but dropped behind eventual winner Bianchi during the pit stops.

Da Costa’s Red Bull connection strengthens his chance of landing an F1 seat in the near future. He has tested F1 machinery already with Force India and it looks increasingly likely we’ll see him back in an F1 car before long.

In the meantime, watch out for him at the Formula Renault 3.5 season finale at the Circuit de Catalunya (20th-21st October) and his one-off Formula Three return at the Macau Grand Prix (17th-18th November).

Browse all One To Watch articles

33 comments on “One To Watch: Antonio Felix da Costa”