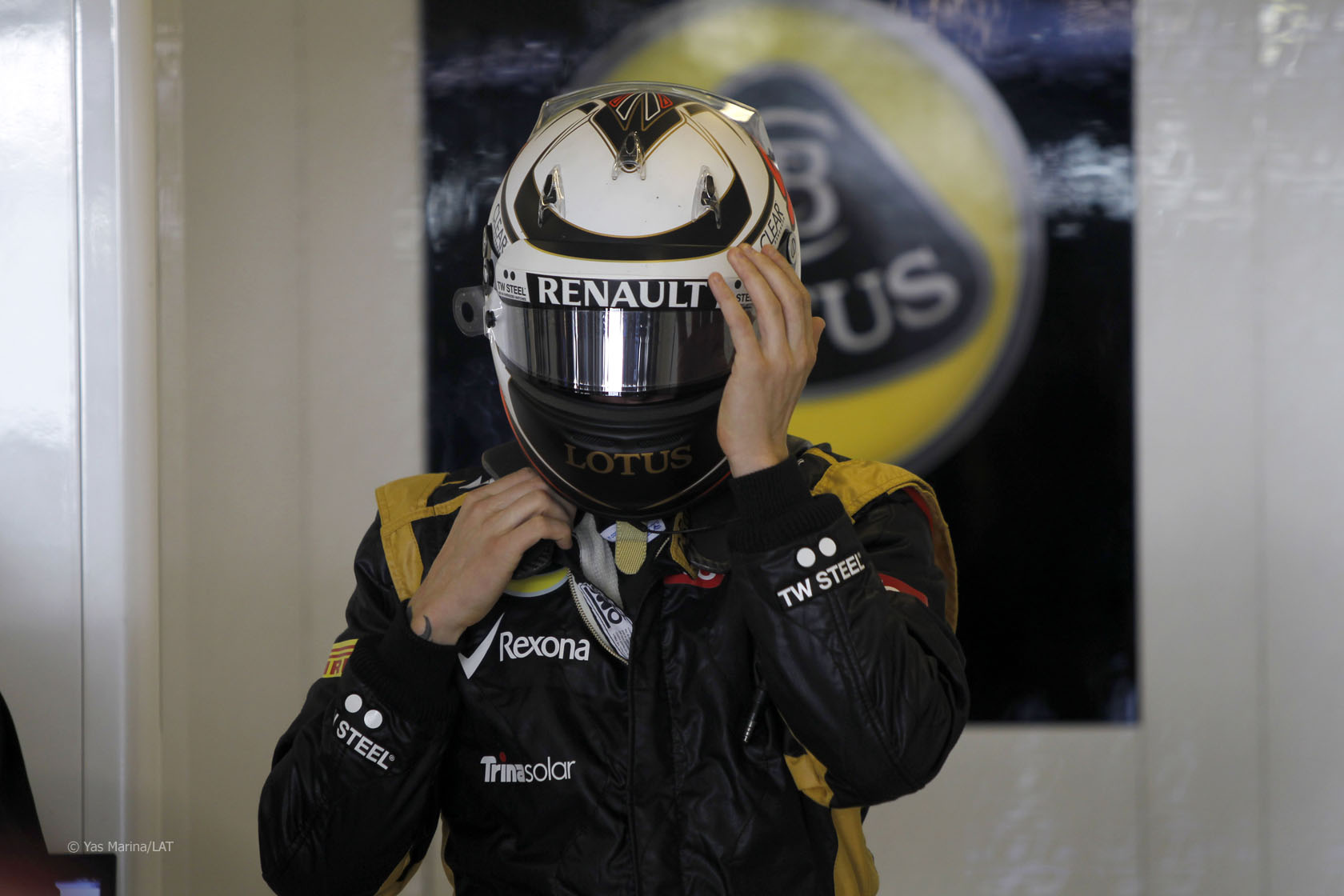 Kimi Raikkonen’s amusing radio messages, Red Bull’s qualifying drama and Max Chilton’s F1 debut were among the talking points at the Abu Dhabi weekend. Here’s a look back on the Grand Prix in Tweets.

Abu Dhabi 2012 will be the 1st ever race with Russian marshals working on track. @vitalypetrovrus says hi! twitter.com/MyCaterhamF1/s?óÔéĽ?Ş

Yas Marina is ‘Hot Stuff’ today as we get stuck into our usual Thursday routine of track walk, media, oh and readying the MR01 for action!

OMG. Watching the film ‘Driven’ atm. The one with Sly Stallone. A truer representation of top end motorsport has never be written…ahem

Watching a film called “driven” in my hotel room …… What a rubbish film. Nothing like driving a race car. So so bad. Laughable.

McLaren were fastest in first practice while Britain?óÔéĽÔäós Max Chilton made his practice debut for Marussia. Second practice saw Vettel back on top with the McLarens second and third, but Fernando Alonso languished down in seventh.

Ferrari break curfew last night working on the car?óÔéĽ?Şonly the first time they have done it this season?óÔéĽ?Ştelling timing though #F1

Thanks for all the kind words!Very happy with the whole session just a shame I got traffic in the middle of my last lap when I was up!???©?ŁăĆ

There was a electric issue in Fp1, the guys really tried hard to fix it, but unfortunately we couldn’t go out anymore! So no laptime…

What a good track to drive at! We got a lot of work for the team done and it was great to be driving again :D

Very windy here in Monaco. But have to start drinking now!! Otherwise can’t stand watching FP2. The reason why? Too boring to watch it!

“Rear tyres are finished,” reports Hamilton. “Pace on the last lap was extremely good, better than anyone else,” he’s told. #F1

#socialfriday @super_ruck: “Have Lewis or JB tried the Austin circuit in the simulator yet?” No, Lewis has driven it on PS3 though! :)

Vettel missed much of final practice while McLaren were dominant once again. Come qualifying, it was an easy pole for Hamilton while Vettel stopped on circuit after taking third. He was later relegated to the back of the grid.

Lewis has just visited the bathroom at the back of the pit garage, still wearing his helmet. Not as easy as it looks…

Only problem with Yas ?óÔéĽÔÇŁ TV just doesn’t show the sheer stupefying awesomeness of how fast everything is. Change of direction is insane.

Vettel has stopped on the track on his way into the pits. If he’s out of fuel we all know what that means… #F1

What is to become of it, its feeling a little sorry for its self!! twitter.com/wozzly/status/?óÔéĽ?Ş

Back of the grid. What a load of old bajs.

In the race Hamilton retired, Webber crashed, Alonso and Button raced, but through it all came Kimi Raikkonen to secure his first victory in over three years. Vettel’s recovery drive to third behind Alonso meant his championship lead was cut to ten points.

@bobmckenzieuk Thats not what happened. You don’t know the facts, neither do the media

“OK Kimi we need to keeping working all four tyres.” “Yes, yes, yes, you don’t need to remind me all the time.” #F1

I take it we are all rooting for Kimi

Can’t hear a word of the podium interviews and I’m right opposite it. Get rid of them. #F1

Kimi asked ‘how many days and with whom will you celebrate’.He says there’s two weeks to next race..

As one of the guy’s who was instrumental in bringing Lotus name back to F1 I’m massively conflicted to see “name”on the winning car today..

Anyone else feel like they’ve been on a roller coaster for the last hour and thirty four minutes?

Very happy for Kimi retuning to winnings ways, what a comeback season he’s had! Well done! My race was good, every lap qualifying, max attak

Tantalisingly close to 12th today, 2 to go, but first 3 days of young drivers test, we continue to push, I will get back home on Thursday

Jenson comes home P4, giving VMM a record 56th consecutive points finish. Something for everyone in the team to be very proud of.

Great first experience of live F1! Action packed! Loved it! Thank you to McLaren for showing me the behind the scenes and Abu Dhabi!

A samurai work without hesitation, without the fatigue confess or the slightest discouragement until complete the goal twitter.com/alo_oficial/st?óÔéĽ?Ş

Did you spot any other noteworthy F1 Tweets during the Abu Dhabi Grand Prix? If so, share them in the comments.