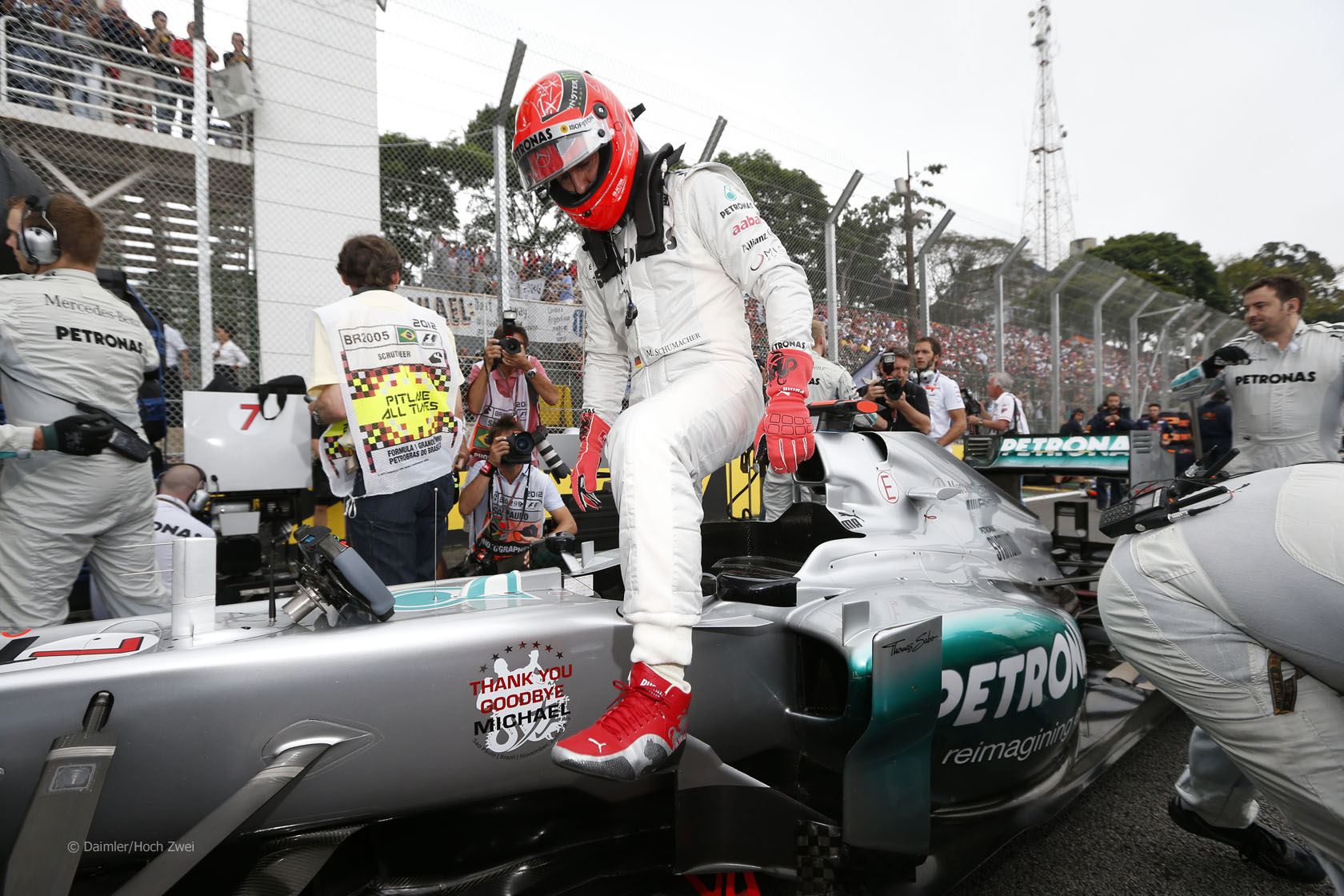 The two drivers who did so before him, Juan Manuel Fangio and Michael Schumacher, went on to win four and five titles in a row respectively.

Like Jenson Button and Lewis Hamilton before him, Vettel won the title in Brazil despite not finishing on the podium.

So long to Schumacher While a new thrice-champion was crowned, another one bowed out. Michael Schumacher returned to retirement after 306 starts, having failed to add to his tally of 91 Grand Prix wins during his three-year comeback.

But he did make a final appearance in the points. The seven-times champion at the wheel of car number seven finished his F1 career in seventh place. Appropriately enough, that’s also where he started it.

In a similar vein McLaren ended their season the way they began it, with a front row lock-out led by Lewis Hamilton followed by victory for Button.

The pair led their first laps in Brazil but it was Button who clinched his 15th career win. He is now 17th on the list of most prolific F1 winners.

With Hamilton retiring following a collision with Nico Hulkenberg, Button has accumulated more points than his team mate during their three years together, with 672 to Hamilton’s 657. See this article for more information.

McLaren scored points in every race where Hamilton and Button were team mates. Here’s how many points each driver scored in that time:

Hamilton’s last three victories have all been preceded and succeeded by no-scores. However he did set his 26th pole position for McLaren, equalling Mika Hakkinen’s tally.

Hamilton had more pole positions than any other driver this year: seven, which would have been eight but for his penalty at the Circuit de Catalunya. Vettel had the most fastest laps with six and Fernando Alonso the most podiums with 13.

And Hamilton also set fastest lap for the 12th time in his career, giving him as many as Alberto Ascari, Jack Brabham, Rene Arnoux and Juan Pablo Montoya.

McLaren were joined by Ferrari and Lotus in scoring points at every round this year. Constructors’ champions Red Bull had one no-score, at Monza.

Hulkenberg’s first laps in the lead Kimi Raikkonen’s mistake in trying to rejoin the track via a closed escape road cost him a lot of time and led to him being lapped. As a result he failed to complete every lap of the 20-race season – he did 1,191 out of 1,192.

However Paul di Resta’s crash promoted Raikkonen to tenth place and extended his string of consecutive points scores to 17.

Raikkonen ended the year third in the drivers’ championship, the best position for a Lotus driver since Ayrton Senna 25 years ago. He was the only driver to finish every race this year.

Pastor Maldonado became the first driver to receive a penalty for collecting too many reprimands. His third reprimand of the year earned him his tenth penalty of 2012, giving him twice as many as any other driver. Three of his penalties were for gearbox changes.

Sergio Perez failed to add to his points tally after being signed by McLaren six races ago.

This was the 500th Grand Prix to feature a Renault-engined car.

The average lifespan of their dry-weather tyres was 180km. Drivers averaged 1.9 pit stops per race with the most coming in the wet race at Malaysia (76) – Brazil saw 69.

Spotted any other interesting stats and facts from the Brazilian Grand Prix? Share them in the comments.