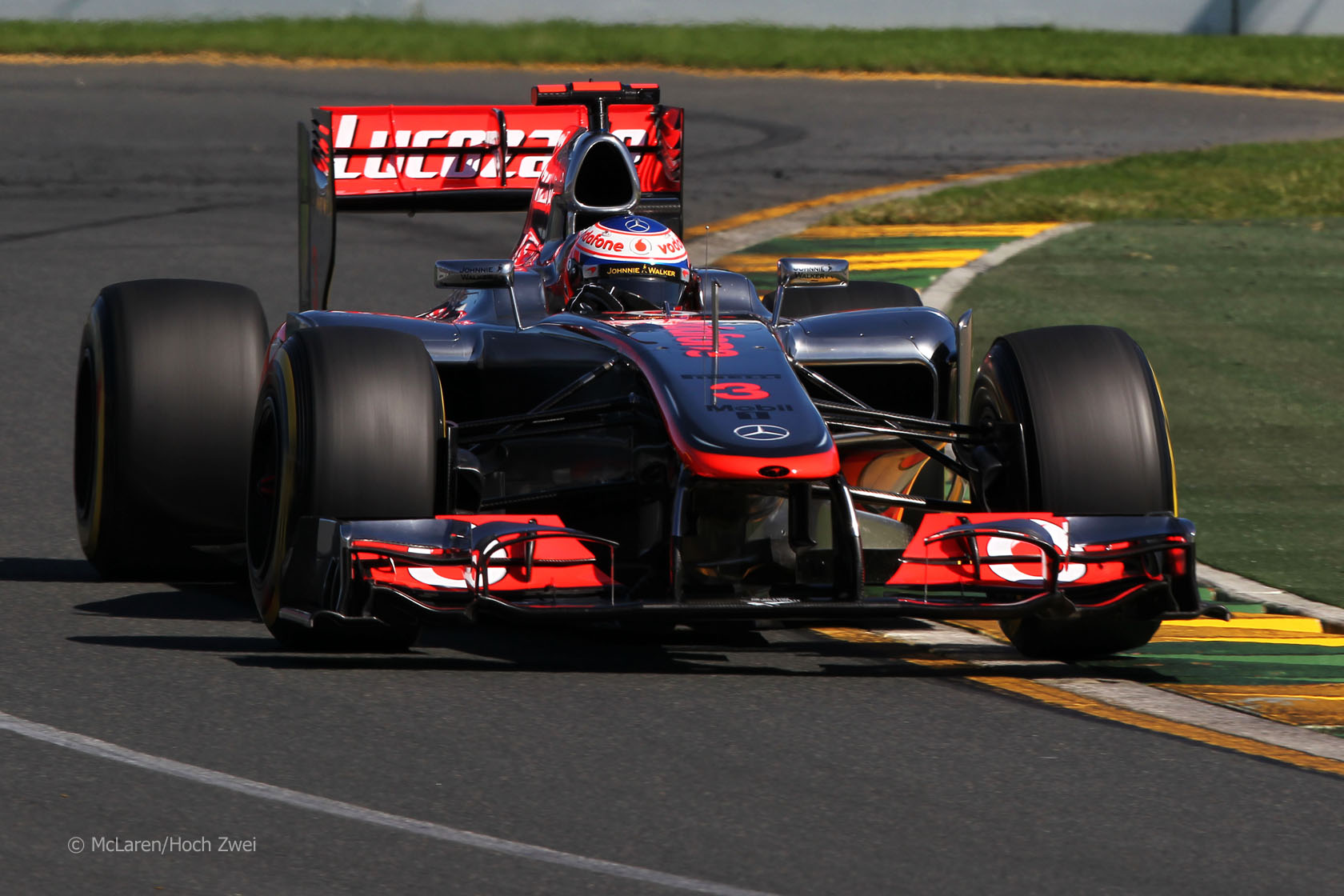 McLaren overtook Red Bull as the quickest team on the track in 2012. Ferrari were quicker than in 2011 – but Lotus were ahead of them. Here’s all the data.

This table compares the fastest lap time set by each team at each race weekend in 2012 (in any session) and shows how far each team was off the quickest last time as a percent. One point leaps out immediately when comparing this graph with the same data for last year: Red Bull got slower.

It was said from the beginning of the season that the restrictions on exhaust-blowing would hit Adrian Newey’s cars hardest, and here is the proof. Last year they were the quickest team at 18 out of 19 race weekends (94.7%), this year that fell to 7 out of 20 (35%).

While Red Bull felt the effect of the changes most strongly, it had consequences for every team in the pit lane. The field closed up dramatically. Throughout the season there were often six teams covered by 1% on lap time – last year there was usually only three.

The cars at the tail of the field were generally closer to the pace this year. Eight races in it looked as though Caterham were finally going to catch the midfield. Instead they fell back into the clutches of Marussia, who they were involved in a fight for tenth in the championship with until the final race.

Change in performance since last year

If we average out the teams’ performance across the entire season McLaren emerge as the quickest team ahead of Red Bull (see table).

The pole positions statistics back this up as the two teams took eight each, though McLaren lost one due to a penalty in Spain and Red Bull picked one up for the same reason in Monaco.

Red Bull exhibited crushing pace in the European Grand Prix which prompted speculation they were about to return to their dominance of 2011. However they were later required to make a change to their engine maps which appeared to set them back again. In the latter part of the season they hit the front once more, but McLaren beat them in the final two rounds.

Ferrari’s performance in 2012 was closely scrutinised and the data tells an interesting story.

Having struggled in the first four races, the upgrades introduced in Spain after the Mugello test allowed them to slash their deficit by more than half – progress they built on in the remainder of the year. Over the first four races where they were a dismal 1.26% off, but from Spain the figure was half that: 0.63%.

Even so, Lotus were closer to the pace than Ferrari on average, yet scored only one win to the Scuderia’s three. This serves as a reminder that this data reflects single-lap qualifying pace better than race pace.

Performance is meaningless if a car doesn’t get to the end of the race, of course. Ferrari did very well in this respect, with neither car breaking down in a race all year long – in Fernando Alonso’s case, for the second year in a row.

McLaren did conspicuously worse with four non-classifications due to technical problems. Lewis Hamilton broke down while leading in Singapore and Abu Dhabi and Jenson Button did likewise while holding second in Italy. Those lost points would certainly have been enough to beat Ferrari to second in the constructors’ championship and perhaps overhaul Red Bull too. The adage “to finish first, first you must finish” remains true as ever.

As well as exhibiting similar performance to Ferrari, Lotus had similarly good reliability too. Their only race-ending technical failure was suffered by Romain Grosjean while he was running second in Valencia.

Which team do you think had the best blend of performance and reliability in their car in 2012? And who under-performed and over-performed with the machinery they built?

140 comments on “Who had the fastest car? Performance data analysed”