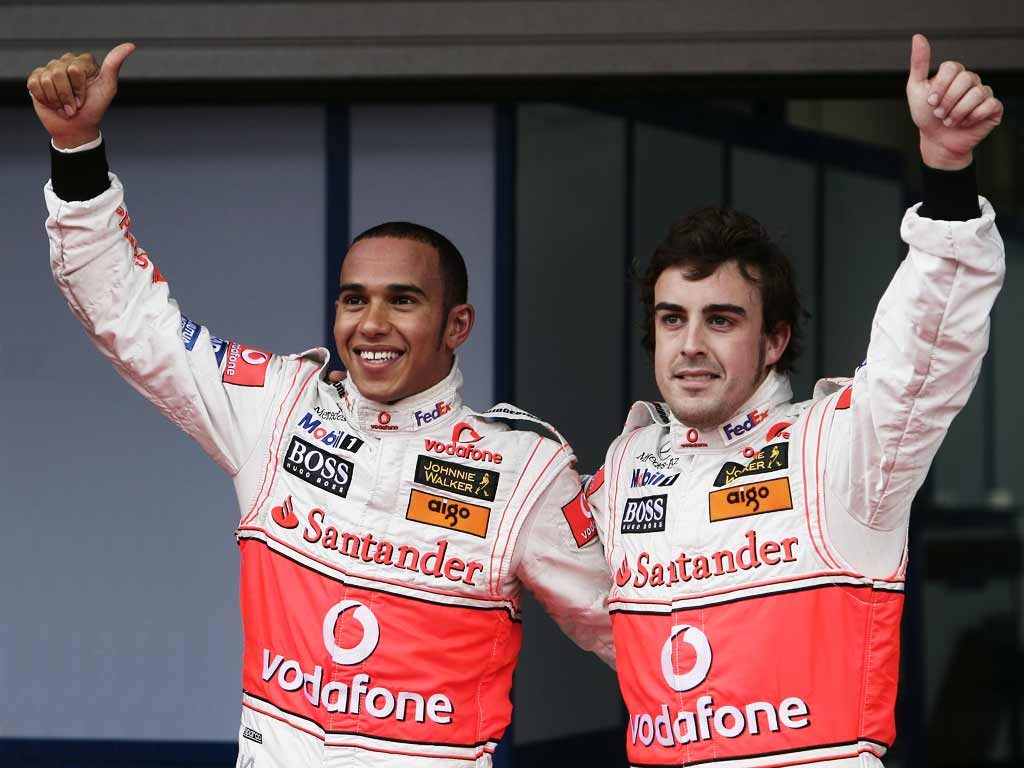 Darren Danga wrote in to ask this question about two of F1’s top talents, Lewis Hamilton and Fernando Alonso:

I would like to know who had more points when they raced, pole positions and their records if you had to compare the two?

I think they are of the best drivers in Formula One at the moment. Not taking anything from Sebastian Vettel, he has a good, reliable, fast car.

My main wish in life is to have these three guys race in a similar car, and look at the result!

It’s always exciting to see top talents go up against each other in the same car. We had it in 2007 with Hamilton and Alonso, but unfortunately it didn’t last very long.

Hamilton and Alonso as team mates

Alonso had moved to McLaren from Renault, with whom he had won the last two world championships. Hamilton arrived at McLaren as a rookie, having won the GP2 championship and Formula Three Euroseries in the preceding two years.

Even Hamilton’s boss and mentor Ron Dennis didn’t expect him to be immediately on Alonso’s pace, telling him “don?óÔéĽÔäót be surprised if you’re half a second slower than Fernando”.

Nor did Alonso expect Hamilton to be much of a threat. “He told me at the beginning that it was my decision to sign a rookie like Hamilton, but that it could cost me the constructors?óÔéĽÔäó championship,” said Dennis in 2010.

To the surprise of Dennis, Alonso and probably everyone else car Hamilton the rookie ended the season in front of his team mate in the championship. But it couldn’t have been much closer: they tied on points with Hamilton ranked ahead as he had five second-place finishes to Alonso’s four.

Hamilton and Alonso waged war within the McLaren garage. At times both claimed the team weren’t doing enough to support their individual causes.

In Monaco Alonso had the benefit of a lighter fuel load in qualifying but Hamilton was not given the opportunity to use the full benefit of his heavier fuel load to pass his team mate during the pit stops. “It says number two on my car and I?óÔéĽÔäóm the number two driver,” grumbled Hamilton afterwards.

Two races later the team arrived at Indianapolis with Hamilton leading the championship. During the race Alonso trailled his team mate and drove up to the pit wall as he exhorted his team to order Hamilton to make way. They didn’t, and Hamilton scored his second win of the year.

Matters came to a head in Hungary when Hamilton refused to let Alonso run ahead of him during qualifying. Alonso hit back by blocking Hamilton in his pit box later in the session. The stewards ruled Alonso had impeded Hamilton and moved him back on the grid. Hamilton won the race.

This had repercussions beyond their internal rivalry as it provoked Alonso to reveal details of McLaren’s use of confidential information belonging to Ferrari. That ultimately saw the team excluded from the constructors’ championship and fined $100m.

From that moment on it seemed impossible Alonso could have a future with the team. He remained in contention for the drivers’ championship but a crash in Fuji – where Hamilton won – virtually ended his hopes. But Hamilton also saw the title slip through his grasp after a strategic error in China and a gearbox glitch in Brazil.

Hamilton and Alonso in 2007: Statistics

Here are the statistics of their 2007 season in detail:

*Drivers qualified with their race fuel loads in 2007 which could affect qualifying performance. Alonso qualified in front of Hamilton in Hungary but was penalised and moved behind.

Hamilton and Alonso since 2007

Hamilton remained at McLaren while Alonso returned to Renault and then switched to Ferrari. This obviously deprives us of the ability to compare their performance in the same cars.

Hamilton’s one-lap speed is a key strength of his along with his racecraft and overtaking. However he has been prone to incidents, notably in 2011, and has headed down the wrong path when setting up his car.

Alonso is a master of consistency, both in terms of avoiding mistakes and in repeating millimetre-perfect laps again and again. But he doesn’t respond well to pressure from the other side of the garage and is not on a par with Hamilton and Vettel in terms of one-lap pace.

Few would doubt Hamilton and Alonso are two of the best drivers in the world at the moment. Choosing between the two of them is extremely difficult, though I have put Alonso ahead of Hamilton in my Driver Rankings for the last two seasons.

The best way to tell would be if they were to share a team again. But the chances of that happening are slim.

Last year Alonso said he would be happy for Hamilton to join him at Ferrari though other sources say that isn’t the case. Given Ferrari’s policy of not having “two roosters” in their driver line-up, it seems unlikely we’ll ever see Alonso and Hamilron in the same team again.

Here’s a summary of their results since 2007.

*Hamilton won ‘on the road’ in Belgium but was stripped of his win after the stewards decided he has passed Kimi Raikkonen illegally. Alonso won in Singapore but it later emerged that his victory was facilitated by his team mate being ordered to crash to bring out the safety car to the benefit of Alonso’s strategy.

*Alonso’s team mate was ordered to hand him victory at Hockenheim.

Can you choose between Hamilton and Alonso? Would you like to see them share a team again? Have your say in the comments.

111 comments on “How do Hamilton and Alonso compare after six years?”