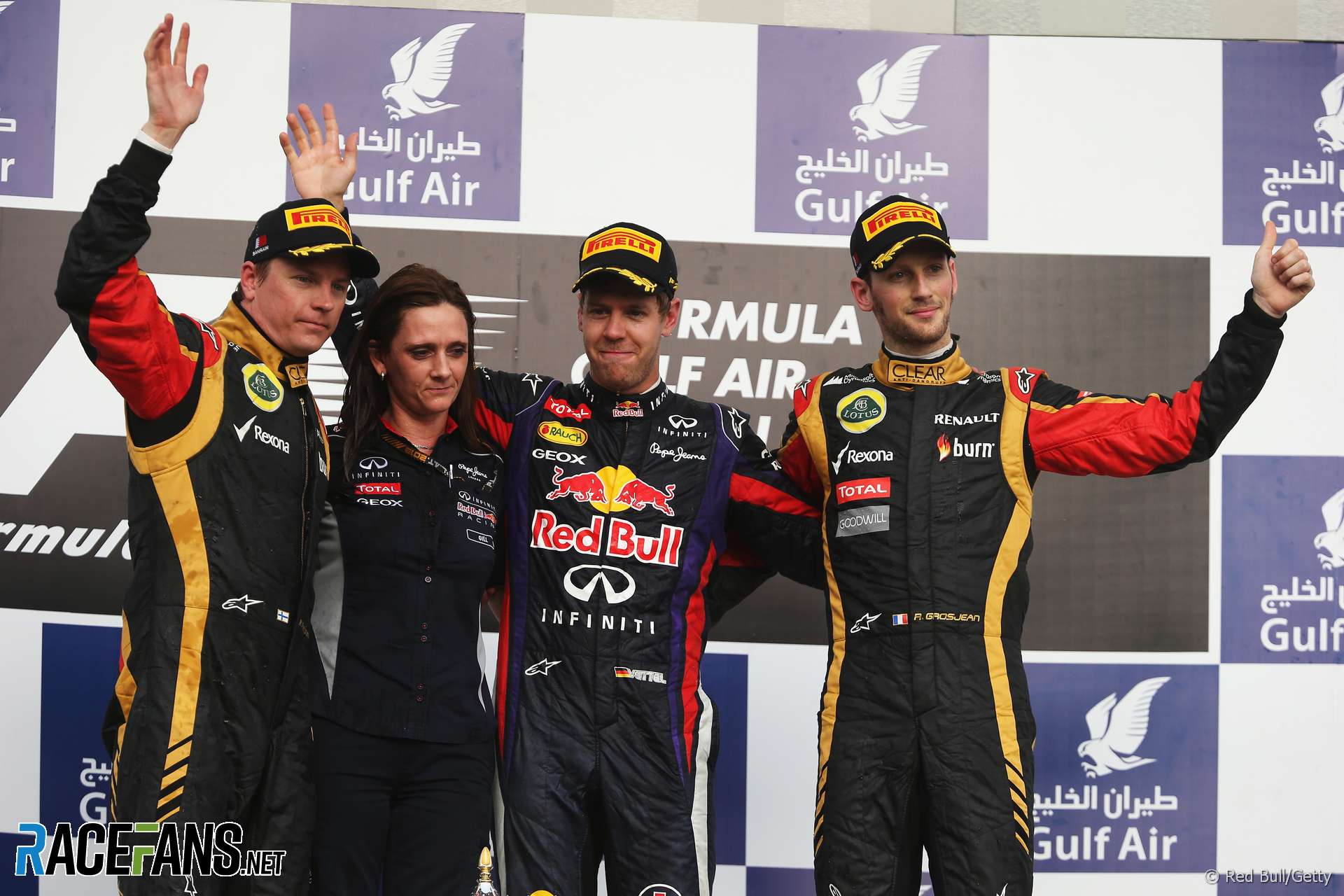 For the second time this year victory for Sebastian Vettel came on a day when his arch-rival Fernando Alonso suffered a poor race.

The Ferrari driver’s race was ruined when his DRS jammed open five laps into the grand prix.

As Alonso slipped back into the back the two Lotus drivers used their superior race pace to join Vettel on the podium, recreating the same top three from this race 12 months ago.

For the second time in his career it was Rosberg’s responsibility to lead the field on the formation lap. As he approached the grid the Mercedes driver slowed down to back the cars behind him up.

As the start was given Vettel and Alonso were instantly on his tail at the first corner, the Ferrari driver squeezing past the Red Bull. But Vettel stayed within range and he out-accelerated Alonso from turn four to re-take second place.

Behind him the other Ferrari of Felipe Massa collided with Adrian Sutil, damaging the F138’s front wing and giving Sutil a puncture which wrecked his race.

As they dropped back Mark Webber took up fifth behind Paul di Resta, followed by the McLarens of Jenson Button and Sergio Perez, the latter having made up four places.

Vettel was pressing to find a way past Rosberg at every turn, with Alonso in turn latched onto his tail. It seemed inevitable that Vettel would pass once DRS was enabled, but he got the job done ahead of that on lap three.

Two laps later Alonso got within range of Rosberg on the pit straight, activated DRS and passed him easily on the run to the first corner. But the wing failed to close again and he continued around the rest of the circuit with the flap still open.

Alonso continued onto lap six with the wing still stuck open. Rosberg was struggling so much that instead of capitalising on his rival’s problem he was passed by Di Resta.

He finally came in at the end of lap seven to have the problem seen to, Ferrari taking advantage of the opportunity to change his tyres. The wing was pushed back into place but as Alonso passed Jules Bianchi on his out-lap it stuck open again. That forced another return to the pits and the decision was taken not to use it for the rest of the race.

Alonso wasn’t the only driver to head for the pits at this early stage. Webber had been stuck behind Massa, who started on hard tyres, and the Red Bull driver pitted early to try to get ahead of the Ferrari. As he began reeling off fastest sector times the rest had to react, including Vettel who came in on lap 11.

Di Resta assumed the lead followed by Raikkonen, the pair both planning to pit twice. The Force India driver was the first of them to come in on lap 15, followed shortly afterwards by Raikkonen. That promoted Vettel back into a lead he never lost again.

Alonso had fallen as low as 18th following his DRS drama. Now it was the other Ferrari’s turn to hit trouble. Massa was running sixth during his second stint when a right-rear puncture forced him back into the pits.

Having returned to the track race engineer Rob Smedley urged him to “just drive flat out” and pit when he needed to. But he suffered a similar failure again later on, which destroyed his chances of finishing in the points.

Rosberg continued to lose places in the opening stages. On lap 20 Button attacked him at the first corner and squeezed down the inside of turn tow to take the place.

Grosjean also took the Mercedes at turn four. The Lotus driver was moving up from 11th on the grid but had compromised his strategy by pitting early due to debris in his radiators which caused his temperatures to climb worryingly high.

The other Mercedes driver was also struggling. Hamilton was told his pace looked good but replied “it doesn’t feel that way, man.” He was also frequently being told to “lift and coast”, as he had in Malaysia when he was short on fuel.

But after coming in for his second pit stop Hamilton found his car’s pace was transformed. “We’ve got some thinking to do,” admitted Ross Brawn to both his drivers after the race. He added to Rosberg that “when it was hot, we were nowhere,” giving a clue to the cause of their trouble. Rosberg briefly re-passed Perez but both McLaren drivers came past him on lap 24, beginning a fierce tussle between the two which did not always look like it was being contested between team mates.

Perez carelessly clipped the back of Button’s car at turn four at one point, threatening to puncture his team mate’s tyre. “He just hit me up that back,” an increasingly irate Button complained on the radio. “Calm him down.”

Perez came back at him a few laps later and Button responded in kind, squeezing Perez onto the dusty run-off at the exit of turn four. But it was Perez who prevailed as Button over-stressed his tyres and became the first of several drivers to make a fourth pit stop. Vettel had little trouble from behind for the rest of the race and indulged in his usual habit on these occasions of securing the race’s fastest lap as well, on the 55th tour.

Raikkonen passed Di Resta on the road – a straightforward DRS move on the main straight – towards the end of his second stint. He was called into the pits straight afterwards, somewhat to his surprise as he’d felt able to keep going. But the move ensured Di Resta would not jump him at the final round of stops.

The second Lotus of Grosjean caught and passed the Force India in the final stint having run a three-stop strategy. Di Resta admitted afterwards that Grosjean’s extra fresh tyres left over from qualifying made him difficult to keep behind.

Behind Di Resta the battle for fourth place was fierce. Hamilton appeared to settle it early on when he passed Webber. But he ran wide at the final corner, gifting the place back to the Red Bull driver.

Webber, struggling with his tyres having been forced to run longer stints because of his earlier pit stops, fought hard to keep Hamilton behind. He made his defensive moves as late as he could get away with and used the full width of the track when the rules permitted him to.

But on the final lap Hamilton wrested the inside line for turn one from him and made a move stick. Further around the last tour Perez demoted him a further place to take sixth. He’d come out on top of another bruising scrap, this time with Alonso.

Perez had claimed the inside line for turn four and obliged Alonso to make use of the run-off area at the exit. This was no more than Button had done to Perez a few laps earlier but it infuriated Alonso. “He pushed me out,” he complained on the radio.

“It’s very clear,” race engineer Andrea Stella responded. “I think Perez will have his problem with the stewards.” He did not – for the second race in a row one of Perez’s rivals took exception to his driving but the stewards clearly felt he’d done nothing wrong.

Four-stoppers Rosberg and Button completed the top ten followed by Maldonado, who’s also been in four times. Hulkenberg, 12th, had suggested it but his engineers stuck with their planned three despite struggling with poor rear grip.

Following their first-lap collision and other calamities Sutil and Massa finished 13th and 15th, Valtteri Bottas in between them.

Toro Rosso came down from the high of China with Daniel Ricciardo down in 16th, saying he lost a lot of time under braking. Jean-Eric Vergne was the race’s only retirement after clipping Bottas and then being hit by Giedo van der Garde.

Charles Pic made the most of the Caterham upgrades to beat not just both Marussias but also Esteban Gutierrez, who crossed the finishing line half a second behind him. Three years ago in Bahrain an exhaust failure on Vettel’s car handed victory to Alonso at this track. Now Alonso’s misfortune helped Vettel on the way to his second victory of the year and second in a row here.

Alonso had looked on the opening four races as his chance to make a big improvement on his 2012 performance, where he struggled in the opening races with the problematic F2012.

But he heads to Spain with just four points more than he has 12 months ago – certainly less than he will have hoped for. Vettel has increased his tally by 24 points over last year and both Raikkonen and Hamilton separate them in the points standings. Alonso may have to worry about more than one rival this year.