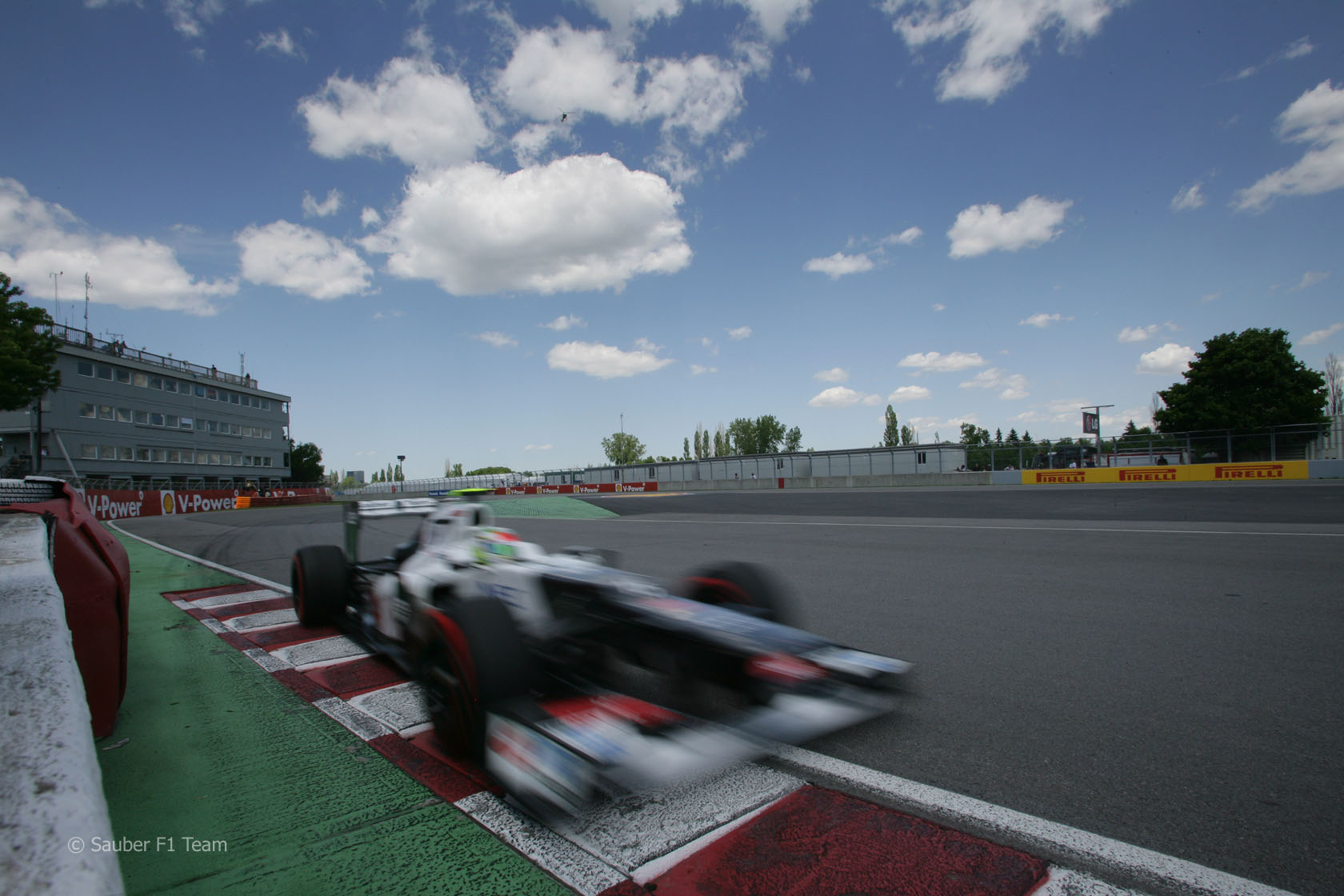 Chicanes. If there’s one thing most F1 fans can agree on it’s a dislike of these slow, unflattering corners.

Great Grand Prix circuits have been ruined by clumsy chicanes interrupting their flowing layouts. Bafflingly, some circuits have even been designed to incorporate the nasty little things from the start – look at Yas Marina in Abu Dhabi.

But there’s at least one chicane which has been elevated above the tedious. The final corner at Circuit Gilles Villeneuve in Montreal, scene of this weekend’s race, is a fine example.

It’s always spectacular to see the best drivers hopping over the kerbs and shaving the concrete wall that lines the road in pursuit of a few tenths of a second.

But get it less than millimtre-perfect and an unforgiving wall is waiting to punish them. There is surely no other stretch of road on the calendar which has caught out as many top line F1 drivers over the years.

There have been enough for it to earn the nickname “Wall of Champions”. Here are some of the more memorable victims it has claimed.

One of the earliest examples of a driver coming to grief at the Wall of Champions. The 1988 race was the first after the pits was moved to its current location. The chicane was quicker then, the kerbs higher, and when Derek Warwick got the corner wrong he was launched into the air and crashed heavily.

Remarkably, he was declared fit to race the following day, and finished a commendable seventh.

Like Rubens Barrichello at Interlagos, Jacques Villeneuve was notoriously unsuccessful on home ground. Following a runner-up finish in his first Canadian Grand Prix in 1996 he never scored points again in his own backyard.

During his title-winning season of 1997, Villeneuve spun his car on the entry to the chicane and slid into the wall on lap two while running second. The contact was slight, but it was enough to end his race.

Two years later the jinx struck again, as Villeneuve slammed into the wall and out of the race, his sixth of eleven consecutive retirements in a woeful campaign for BAR.

In his Ferrari days, Michael Schumacher could usually be relied on to bring the car home in one piece. But even at his peak the seven-times champion was capable of the occasional lapse of concentration.

Midway through the 1999 Canadian Grand Prix, Schumacher slid wide coming out of the chicane and slammed into the wall, throwing away the race lead to his title rival Mika Hakkinen.

The McLaren driver went to win the race and the championship: Schumacher’s title hopes ended when he broke his leg in another crash at Silverstone the following month.

It was the 1999 race which cemented the reputation of the corner and earned it the nickname Wall of Champions. Ricardo Zonta also hit the barrier during the race, but Damon Hill’s crash meant the champions of 1994, 1995, 1996 and 1997 had all come to grief at the same corner.

Hill oversteered out of the chicane and clipped the wall with his right-rear, putting him out.

Perhaps this crash was still on his mind when he announced he would retire from F1 at the end of the season a few days later. A miserable showing at Magny Cours initially persuaded him to make the British Grand Prix his final race, before he backtracked again and decided to see his contract out to the end of the year.

Barrichello joined the Wall of Champions’ illustrious roll call after losing control of his Ferrari midway through qualifying. However the regulations at the time allowed him to switch to a spare car, which he used to salvage a creditable fifth on the grid.

Later in the session Nick Heidfeld took off over the kerbs and trashed his Sauber against the wall. Both Barrichello and Heidfeld went on to crash out on race day too.

In Jenson Button’s case, his ascent to the rank of champion came after his brush with the wall.

Following an impressive breakthrough campaign in 2004, the 2005 campaign was a huge disappointment for him and his BAR team. Going into the eighth race of the season in Canada, they had yet to muster a single point, and had been disqualified or banned from three of the previous rounds due to a technical infringement.

It seemed their fortunes had been transformed when Button took a surprise pole in Montreal. But he lost the lead at the start and threw away a podium by breaking his suspension at the final corner.

A brush with the Wall of Champions may have hastened Juan Pablo Montoya’s exit from Formula One. In what turned out to be penultimate Grand Prix, he clipped the wall with his McLaren, and though there was no visible damage, he was forced to stop moments later

At the following race at Indianapolis, Montoya triggered a first lap pile up by crashing into the back of his team mate Kimi Raikkonen. Within days he had departed F1 for a career in NASCAR.

Kamui Kobayashi’s first visit to the Circuit Gilles Villeneuve was not a successful one. The Sauber driver qualified an uninspired 18th on the grid, and launched his car over the kerbs and into the Wall of Champions on the first lap of the race the following day.

The Japanese star had had a miserable start to his first full season, scoring just one point in the first eight events. But following his Canada shunt Kobayashi got his act together and took points in four of the following five races.

The most recent champion to hit the wall is Sebastian Vettel. He racked up 15 pole positions and 11 victories on his way to a second world championship victory in 2011.

His campaign that year may not have been error-free but, unfortunately for his rivals, most of his mistakes occurred during practice. In addition to Friday shunts at Istanbul, Suzuka and Yas Marina, Vettel came to grief at Montreal’s Wall of Champions for the first time in his career.

But on this weekend he also made a mistake when it mattered: running wide at turn six on the final lap of the race handed victory to Button.

If any F1 driver can be expected to drive into a wall, it’s Pastor Maldonado, so it came as little surprise when the Williams driver did exactly that at Montreal’s final chicane in 2012. The qualifying shunt left the Williams drive 17th on the grid, which became 22nd after a gearbox change.

The shunt came in the middle of a disastrous run of form following his Spanish Grand Prix victory earlier that season. Maldonado was involved in on-track incidents in seven consecutive races between Monaco and Spa, and did not add to his points total until the Japanese Grand Prix several months later.

More victims of the Wall of Champions

Several more of the drivers to have visited the Wall of Champions – including Jarno Trulli, Gerhard Berger, Christijan Albers, David Coulthard and Ralf Schumacher – can be seen here.

But will all 22 drivers keep out of its clutches this weekend?

57 comments on “Top Ten: Victims of the Wall of Champions”