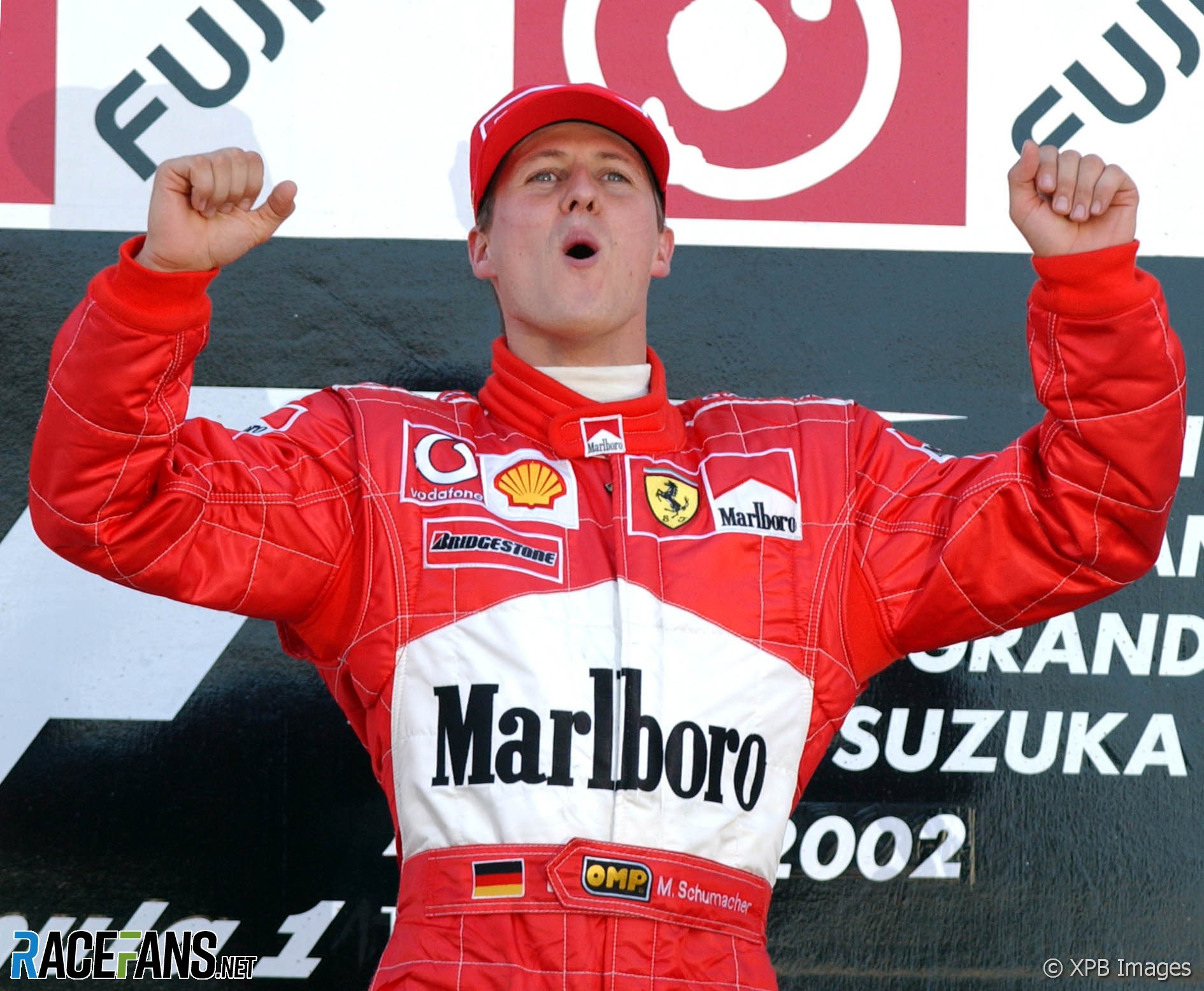 Ayrton Senna’s haul of 65 pole positions was once thought likely to stand the test of time, but Michael Schumacher beat it.

And though Schumacher’s tally of 91 wins may seem insurmountable, the same was once said of Alain Prost’s 51 victories.

As the saying goes, records are there to be broken. But there are some records which won’t be under threat any time soon. From geriatrics on the podium to sharing a single point between seven, here are ten F1 records that are in it for the long haul.

The 1997 European Grand Prix at Jerez is chiefly remembered for Michael Schumacher’s unsuccessful attempt to eliminate his title rival, Jacques Villeneuve, from the race.

But F1 anoraks also recall the astonishing events of the previous day’s qualifying session. It saw the same two drivers plus Villeneuve’s team mate Heinz-Harald Frentzen stop the clocks at the same time to within a thousandth of a second.

First Villeneuve, then Schumacher and finally Frentzen lapped the 4.4km (2.7-mile) Jerez circuit in 1’21.072. Unless F1 follows IndyCar’s lead and starts measuring times to four decimal places, this record is stuck at 0.000s.

Earliest start to a season

While modern-day F1 campaigns usually kick off in mid March, until the 1980s it was customary for the season to begin as early as January.

In 1965 and 1968, at the East London and Kyalami circuits respectively, the season opening South African Grand Prix was held on the very first day of the year. Yet in both seasons, the following world championship event was not held until over four months later!

The track was wet as the Canadian Grand Prix got underway at the Circuit Gilles Villeneuve in 2011. But on lap 19 a fresh downpour forced the race to be red-flagged for two hours.

Under F1 rules the clock kept tipping so that when the race finally resumed and ran its scheduled 70-lap distance the entire thing had taken over four hours.

This prompted the introduction of a new rule for 2012 requiting all races to be completed within four hours regardless of any stoppages. It’s a good thing the rule wasn’t in place a year earlier, or we’d have been robbed of the thrilling sight of Jenson Button hunting race leader Sebastian Vettel down and passing him on the final lap.

Most failures to pre-qualify

When F1 entry lists ballooned in the late eighties pre-qualifying sessions were held to weed out some of the slowest cars before the real action began.

Gabriele Tarquini suffered more than most at the hands of this cruel eliminator. Driving for such unfancied teams as Coloni, AGS and Fondmetal he failed to gain a place on the grid on 40 separate occasions. In 24 of those he suffered the indignity of failing even to qualify for qualifying!

Today it’s been 17 years since we last had a full grid of 26 cars at a Grand Prix. Given the current state of the world economy and the huge costs involved in running a Formula One team, the prospect of the grid being oversubscribed again seems a very distant one. This unwanted record is Tarquini’s to keep.

A whopping 34 drivers began the 1953 German Grand Prix at the Nurburgring, 14 of whom were local wildcards. Today’s grid is capped at 26.

At the other end of the spectrum, the infamous six-car United States Grand Prix of 2005 unsurprisingly takes the record for the smallest field. It is possible a race could see fewer starters than that, but let’s hope it doesn’t happen.

The physical demands of modern F1 cars mean that it is highly unusual for drivers to still be racing in their forties. The oldest driver to start a race in recent years was 43: Schumacher in last year’s Brazilian Grand Prix.

The record for the oldest ever podium was set at that year’s Swiss Grand Prix. Giuseppe Farina, Luigi Fagioli and Louis Rosier – had a combined age of over 140!

‘But it could happen again’, I hear you all cry. Granted, this is not strictly an “unbeatable” record. But I sooner expect to see Narain Karthikeyan win a Grand Prix driving a lawnmower.

Most podium finishes in a season

Thanks to the performance and reliability of his Ferrari F2002 (and, earlier in the season, the F2001), Schumacher not only finished every race of the 2002 season, he never took the chequered flag lower than third. And he only finished there once!

The record may be improved upon by a driver finishing a longer season entirely on the podium, but that 100% hit rate is never going to be beaten.

The same applies to the obscure example of Dorino Serafini who finished his only world championship race, the 1950 Italian Grand Prix, on the podium.

Serafini only drove half of the race – he handed his car to Alberto Ascari midway through as the rules permitted at the time.

There have also been several examples of drivers who finished on the podium in the Indianapolis 500 when it counted towards the world championship from 1950 to 1960, but these races were not run to F1 rules.

During the first ten world championship seasons in the 1950s, drivers were awarded a single point for setting the fastest lap of the race. Unfortunately, timing systems in this era were somewhat rudimentary, and lap times were sometimes measured to the nearest second.

The 1954 British Grand Prix at Silverstone saw seven drivers shared a fastest lap of one minute and 50 seconds. The single point was split between them, each scoring one-seventh of a point. Four of them also scored points for their finishing positions, but for three drivers 0.14 points was all they came away with.

Longest wait for the second-placed car

But in years gone by, more regulatory freedom meant cars often varied hugely in performance. Coupled with the high rate of attrition, it meant that many races concluded with huge gaps between each driver.

Jim Clark’s sensational victory by four minutes and 54 seconds in the 1963 Belgian Grand Prix will surely never be surpassed. He burst through from eighth on the grid to take the lead and was never headed around the fearsome 14.1km Spa circuit.

Conditions during the race were so dreadful Clark’s team boss Colin Chapman urged officials to abandon the proceedings at one point. Meanwhile Clark annihilated his rivals. He lapped the field at one point, though second-placed Bruce McLaren unlapped himself.

That meant when Clark took the line to finish it took almost five minutes for McLaren to appear in second place. Today’s tracks simply aren’t long enough for such a feat to be possible. Spa remains the longest track on the calendar, but is half the length it used to be and is lapped in well under 110 seconds in race conditions.

Have you spotted any more unbeatable F1 records or statistical quirks? Share them in the comments.