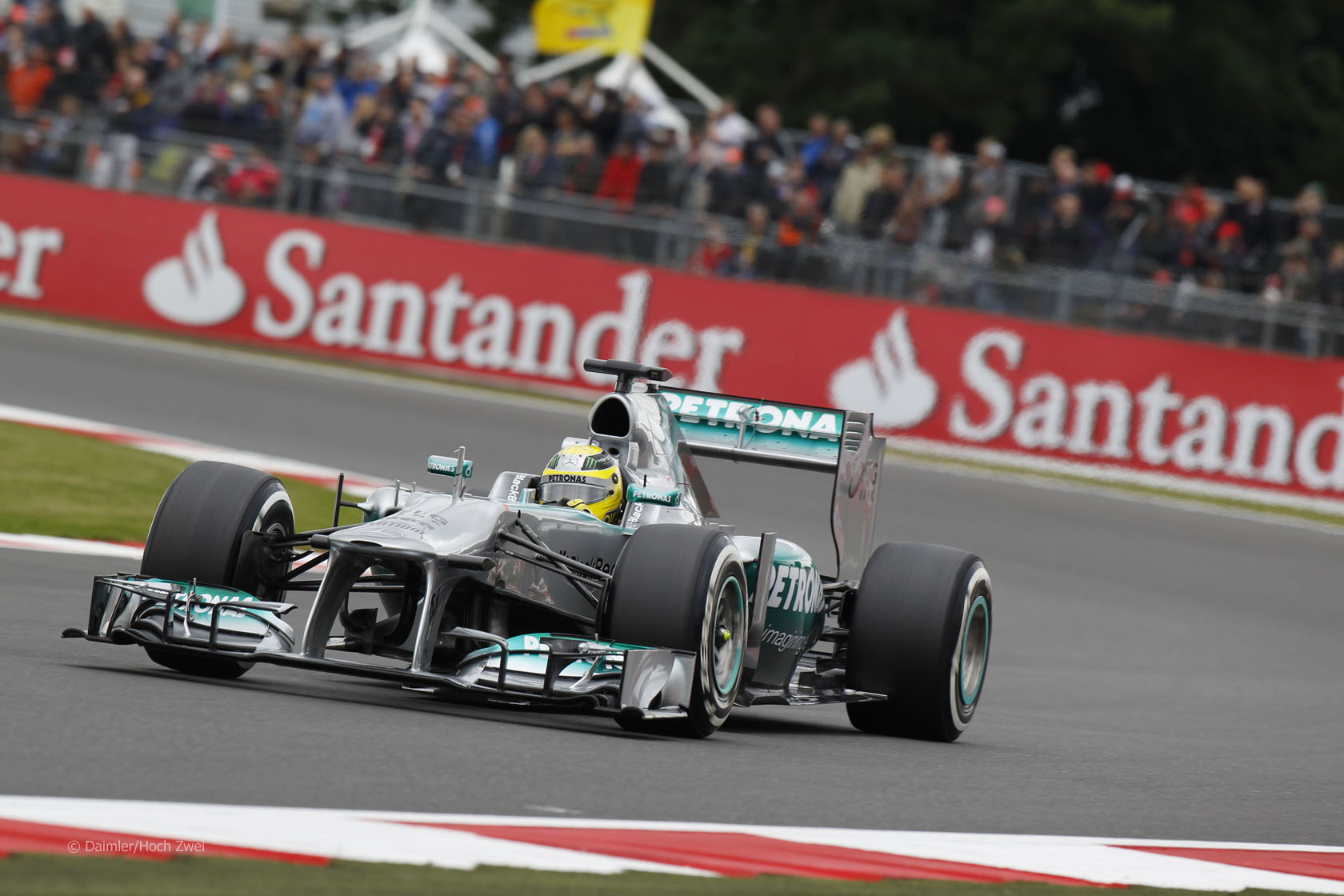 Nico Rosberg took his second victory of 2013 after a chaotic British Grand Prix that saw Sebastian Vettel retire from the lead just eleven laps from the finish. But the race was marred by an unprecedented sequence of explosive tyre failures that saw four separate drivers suffer instantaneous left-rear tyre delaminations during the course of the race.

At the start, Lewis Hamilton led from pole as the Red Bull of Sebastian Vettel took second from Nico Rosberg. After starting fourth, Mark Webber made a terrible start and fell down to 15th place after contact with Romain Grosjean, while Felipe Massa made a superb jump from 11th place from fifth on the grid.

Hamilton pulled away gradually at the front until Lap 8, when a sudden left-rear tyre delamination along the Wellington Straight left him cruising helplessly to the pits. Just two laps later, Felipe Massa suffered an identical failure after running over the kerb at the kink leading onto the Wellington Straight, forcing him to pit. That was followed on Lap 15 by yet another left-rear failure ?óÔéĽÔÇŁ this time for Jean-Eric Vergne in the Toro Rosso along the Hangar Straight, ultimately putting the Frenchman out of the race.

The Safety Car was deployed to allow marshals to sweep the track for debris and the race resumed on Lap 22, with Vettel leading from Nico Rosberg. Kimi R?â?ńikk?â?Ânen and Fernando Alonso used fresher tyres to easily pass Lewis Hamilton, who himself pitted before scrapping with Paul di Resta over 12th place.

With fourteen laps remaining, Rosberg began to slowly reel in Vettel at the front. But the Mercedes driver would not need to fight the Red Bull for the lead, as the triple world champion suddenly slowed at the exit of Stowe on Lap 41 with his car apparently suffering from a drive failure.

With Vettel stricken on the side of the track across the finish line and out of the race, the Safety Car was deployed for the second time. Rosberg, Fernando Alonso and Mark Webber all opted to pit for new tyres immediately, while Kimi R?â?ńikk?â?Ânen stayed out on the circuit after the team left it too late to call him in for fresh rubber.

At the restart on Lap 45, Rosberg led R?â?ńikk?â?Ânen, Adrian Sutil in the Force India, Daniel Ricciardo and Mark Webber. With fresh tyres, Webber quickly passed Riccardo and then Sutil, while Alonso was fortunate to pull out of Sergio Perez?óÔéĽÔäós slipstream on the Hangar Straight just as the McLaren became the fourth left-rear delamination victim of the afternoon.

Webber then relieved R?â?ńikk?â?Ânen of second at Copse, as Alonso and Hamilton – who was fighting back from his early set back – both passed Ricciardo. As Webber set about catching Rosberg for the win with the laps counting down to the chequered flag, Alonso jumped into the final podium position by passing the hapless R?â?ńikk?â?Ânen in the DRS zone.

Webber?óÔéĽÔäós efforts were enough for him to catch the Mercedes on the last lap, but it was not enough to allow him to snatch victory and Rosberg duly held on to take his second win of the season, with Alonso taking third. Hamilton recovered valiantly to finish fourth, with Raikkonen fifth, Massa sixth, Sutil seventh, Ricciardo eighth, Di Resta ninth from the back of the grid and Nico Hulkenberg rounding out the points positions in tenth.