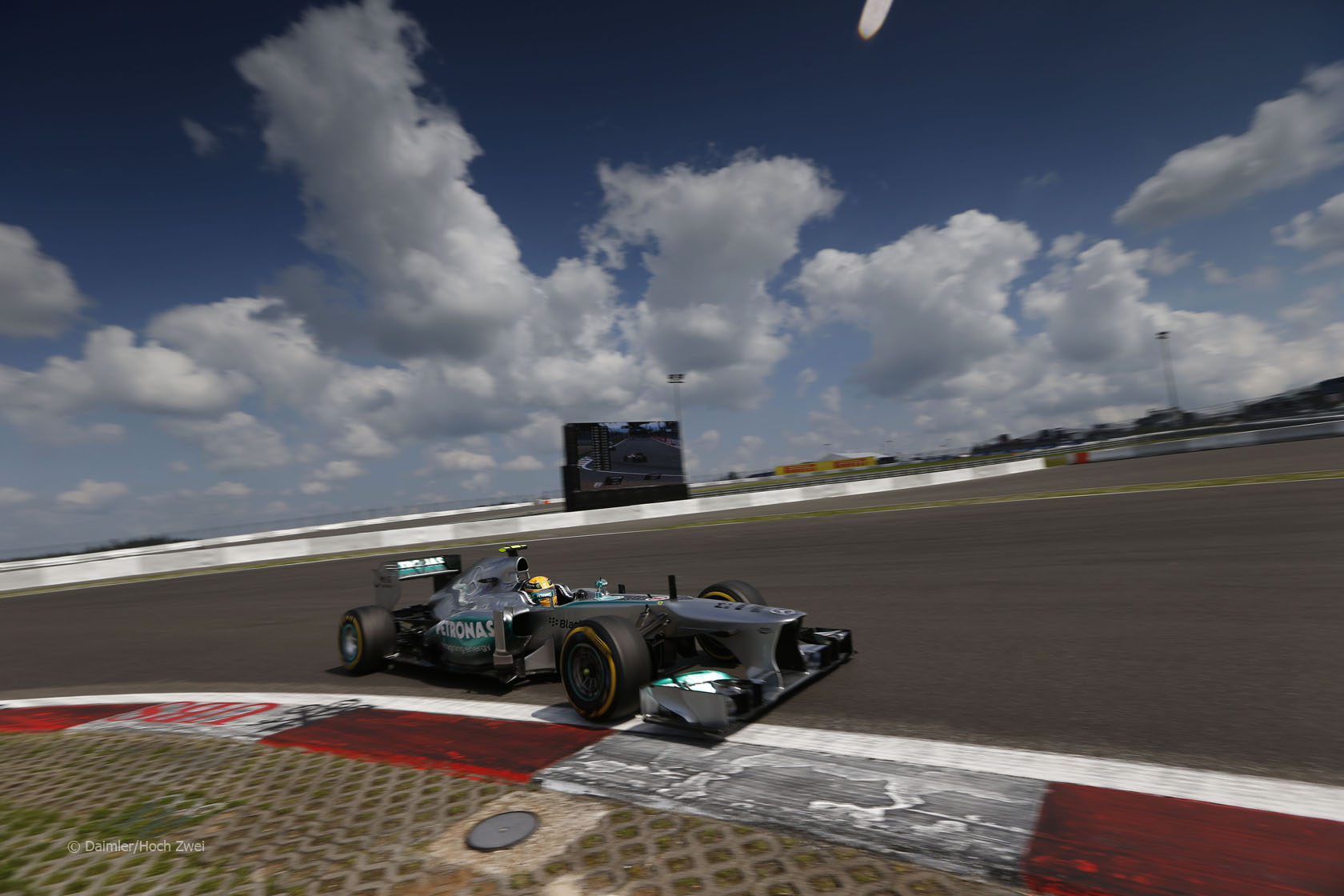 It’s lap seven at the British Grand Prix and Lewis Hamilton is leading the field as he bids to win his home race.

Sebastian Vettel is just starting to edge into the two second margin the Mercedes driver has built up. The scene is set for a finely-poised battle between the pair of them over the remaining 53 laps.

But Hamilton’s tyre explodes on the Wellington Straight and the contest is over far too soon.

Happily that battle is about to resume, for the same two drivers share the front row for the German Grand Prix. And this time it’s Vettel who’s bidding to win his home race – for the first time in his career.

The run to the first corner at the Nurburgring is one of the trickier starts on the F1 calendar. The first corner is tight, slow, the apex is blind at it comes up quickly – the run from pole position to the corner is just 260 metres.

It can be the scene of incidents, as Sunday’s pole sitter knows well. Hamilton took the lead at the start of the 2009 for a brief distance but clipped Mark Webber’s front wing and picked up a puncture which ruined his race. He collected a puncture in the opening moments of the 2007 race as well.

Starting from his first pole position at the Nurburgring for an F1 race, Hamilton can expect to come under pressure from Vettel soon after the start as we have seen happen several times already this year.

Mark Webber starts third and will be desperate to avoid a repeat of the awful start that almost ruined his race at Silverstone. The Lotus pair line up behind him. F1’s last visit to the Nurburgring saw chilly temperatures that struggled to reach the mid-teens. Today the track was bathed in sunshine and exceeded 40C during qualifying. But despite that and some rapid lap times the tyres held up with no sign of a repeat of the problems seen at Silverstone.

It was clear from practice that race strategies will be about minimising the time spent on the soft tyre: It may but up to 1.5 seconds per lap faster but it doesn’t last. This will be a particular concern for the six drivers at the front of the grid who have to start on it, having already put at least three laps on their tyres.

After qualifying Hamilton said he was wary of Red Bull’s pace over a race stint, believing it still to be better than Mercedes’. But Silverstone showed Mercedes have made strides in this area.

Mercedes have other doubts about Hamilton’s pace, Ross Brawn explained: “We go into the race with some question marks, as we haven’t done any representative running with the set-up we now have on the car.”

The cars to watch in this group are the Lotuses, who ran better on the soft tyres than their rivals on Friday. That may give them a greater opportunity to pick the right moment to change tyres without coming out in too much traffic.

Row four belongs to the Ferrari pair who will start on medium tyres. Although unable to match Mercedes’ single-lap pace Fernando Alonso believes they will be more competitive than they were a week ago: “We seem to have made a step forward and returned to the level of competitiveness which we had prior to Silverstone,” he said.

Explaining Ferrari’s choice of strategy, he said: “Maybe here it?óÔéĽÔäós not too important to start from the front because the soft tyre shows very high degradation and so, from lap eight onwards the run of pit stops will begin and traffic will build up. At that point we will have to push like if they were all qualifying laps.”

Jenson Button, ninth, and the rest of the field have a free choice on what tyres they will start on. That includes Nico Rosberg, who qualified well out of position in 11th, and has some ground to make up.

Here’s all the data from qualifying:

Will Hamilton score the win that got away from him at Silverstone? Will Vettel finally triumph on home ground? And will Ferrari’s strategy gamble pay off?

Share your views on the German Grand Prix in the comments.

58 comments on “Hamilton-Vettel battle to resume at the Nurburgring”