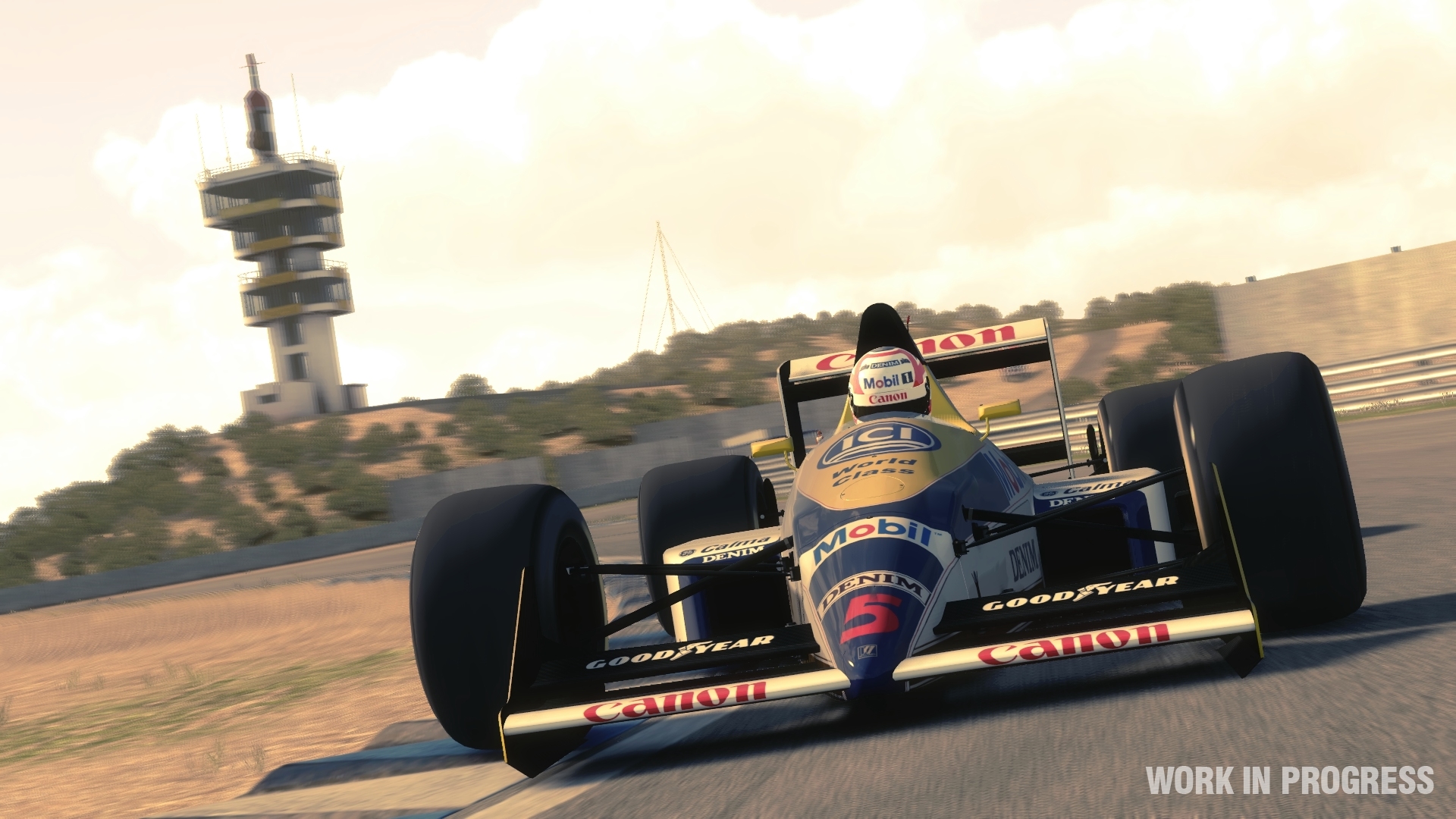 By their own admission, one of the main aims of Codemasters for the first three years of producing their F1 series was to secure the exclusive rights to make the official games into 2014 and beyond. Once that was achieved, they said, they would be able to make bigger, better and more exciting games.

So what does F1 2013 ?óÔéĽÔÇŁ the first new game since Codemasters received that all-important rights extension from Bernie Ecclestone ?óÔéĽÔÇŁ have to offer the sport’s millions of fans around the world that previous games did not?

The answer is the most exciting new addition to the series to date. And by ‘new’, I should really say ‘old’.

Yes, the fans’ most requested feature ?óÔéĽÔÇŁ classic grand prix cars ?óÔéĽÔÇŁ is the major new addition to the official F1 game series for this year. And Codemasters envisage it being a much more extensive offering than what was found in previous official games which included older cars, such as Sony’s 2007 release Formula One: Championship Edition.

The first batch of cars includes the 1988 Lotus 100T (pictured top), Williams cars such as Alan Jones?óÔéĽÔäós FW07 and some yet-to-be-announced Ferraris. Screenshots also suggest the 1988 Williams-Judd FW12 will feature.

A further six classic Williams and Ferrari cars from the nineties are on offer including Nigel Mansell?óÔéĽÔäós 1992 championship winning FW14B, Damon Hill?óÔéĽÔäós FW18 from 1996 and the Ferrari F399 as driven by Eddie Irvine to the runner-up spot in 1999. Advertising restrictions mean they are depicted in non-tobacco liveries.

While some may have hoped for a greater number and wider variety of vehicles, that will likely be forgotten once players reintroduce these retired greats to the race track once again. And with classic cars come classic circuits as Codemasters will include fully modelled retro versions of Jerez, Brands Hatch, Imola and Estoril to drive in the game ?óÔéĽÔÇŁ all in their classic 1980s and 1990s glory without a single chicane, tarmac run-off or DRS zone in sight. With fat tyres, less aerodynamic efficiency and – in some cases – screaming turbo engines, the classics are tremendous fun and require real roughneck driving to lower lap times. The FW07B and 100T can be thrown into the corners like over-sized, over-powered go-karts as you feel the car starting to slide at the limit of adhesion. While the FW14B has all the phenomenal mechanical grip and stability you?óÔéĽÔäód expect from a car famed for its advanced active suspension system. Hanging a Lotus 100T on the ragged edge through the high-speed turns of pre-chicane Jerez bathed in beautiful lighting with the whine of the turbo engine as it kicks through the gears is immensely satisfying.

The Classic mode is littered with small touches that will no doubt be appreciated by hardcore F1 fans. The heads-up display for the eighties cars has been redesigned to reflect the basic yellow graphics overlay from F1 broadcasts of the time (if you?óÔéĽÔäóve seen the film Senna you?óÔéĽÔäóll recognise them). The HUD for nineties cars has been designed as a homage to the blue and yellow overlay graphics that were used in FOM?óÔéĽÔäós digital coverage of the sport from the late 1990s to 2002.

Each car has a unique tachometer, working cockpit views with basic LED rev counters and both gear and brake-balance changing animations. While the 2013 cars sit in modern pit areas with laptops and monitors on the main home screen, enter Classic mode and the cars sit in old-style garages surrounded by toolboxes. Players will also be introduced to the mode in a series of videos narrated by the iconic voice of Murray Walker, which adds immensely to its nostalgic appeal.

But the best news about the Classic mode isn?óÔéĽÔäót that players will get to drive the cars ?óÔéĽÔÇŁ but that they?óÔéĽÔäóll also get to race them. Properly. All cars can be raced in a variety of modes, both online and offline, including Grand Prix mode, Quick Race, in a custom championship as well as in online and split-screen multiplayer.

One disappointing limitation is that players are forbidden from mixing cars from different eras ?óÔéĽÔÇŁ so no pitting a Williams FW07 against an FW14B or this year?óÔéĽÔäós Ferrari against its 1999 ancestor. However players will be able to drive and race any car ?óÔéĽÔÇŁ 1980s, 1990s and 2013 ?óÔéĽÔÇŁ on any circuit, modern or classic.

The identities of several famous past racers also appear: Nigel Mansell, Mario Andretti and Gerhard Berger are the first of ten Formula One greats who players can race against in 1980s cars while Alain Prost, David Coulthard, Jacques Villeneuve and Eddie Irvine have been announced as the first confirmed drivers in 1990s cars. Expect more big names to be announced as the game nears its autumn release.

In a first for Codemasters’ F1 titles, this year’s game will be released in two editions. The standard version will include the 1980s cars plus Jerez and Brands Hatch circuits, with the 1990s cars, Imola and Estoril available to purchase via download after release. F1 2013 Classic Edition features all the classic cars and tracks.

Those expecting revolutionary changes to the real meat of the game ?óÔéĽÔÇŁ the 2013 season ?óÔéĽÔÇŁ will likely be disappointed. The core experience to be had in F1 2013 seems little changed from previous editions, aside from all the expected team, driver and track updates.

Car setup parameters, options, cameras, menu system and game modes remain virtually identical to 2012, A new addition to the Proving Grounds mode is yet to be detailed. As far as the main career mode is concerned, no mention has been made yet of any significant changes and while it is claimed the Young Driver Test tutorial mode at the Yas Marina circuit has been expanded, it?óÔéĽÔäós not yet known how.

Handling feels similar but refined compared to last year. Even with no driving assists and the use of an Xbox 360 controller, it was relatively easy to push from the very first lap of the game around Silverstone in Time Trial mode in Nico Hulkenberg?óÔéĽÔäós Sauber without spinning. With a Fanatec wheel and pedals set-up the handling felt precise and fun, but no more challenging or removed from 2012. Unfortunately, it still seems at this early stage as though unrealistically extreme setups ?óÔéĽÔÇŁ ultra-low ride heights and super-stiff springs ?óÔéĽÔÇŁ offer the best reduction in lap times with minimal impact on balance. While it?óÔéĽÔäós easy to assume this means Codemasters have put all their efforts into the classic mode for this year and neglected the 2013 experience, there are certainly some positive additions to the 2013 aspect of the game. In a welcome move, cockpit mirrors have an increased depth of vision ?óÔéĽÔÇŁ meaning they are now actually useful, whilst players now have the option to save mid-session, which will surely please 100% race distance enthusiasts. In an attempt to improve AI balancing in single player, F1 2013 now has five difficulty settings ?óÔéĽÔÇŁ Amateur, Intermediate, Professional, Expert and Legend ?óÔéĽÔÇŁ each with its own AI speed level to suit.

Tyre wear scaling to race distance makes a return to the series, as does the ability to race a full or custom championship season with any licensed driver in Grand Prix mode. Codemasters claim to have improved the penalty system – which had been criticised by some – and AI driver aggression, making your computer rivals more inclined to attack you. However the demonstration builds that were tested were locked to Time Trial mode, so we’ll have to wait for the finished product to see how successful they have been.

The game?óÔéĽÔäós audio has been also been improved, with the addition of a satisfying gearbox backfire sound under downshifting and higher-pitched external engine sounds making the cars sound more pleasant when passing. In terms of the online experience, players should not expect anything too different from what they are used to already, although hosts do now have the ability to turn off the penalty system in races ?óÔéĽÔÇŁ which will surely be music to the ears of those who organise online championships.

With more to be announced as the game nears release, this is likely to prove the most hotly-anticipated Codemasters F1 game since they took over the franchise. We await the arrival of definitive game eager to discover whether the addition of old-style cars and tracks is what Codemasters needed to breathe new life into their exclusive F1 game series.