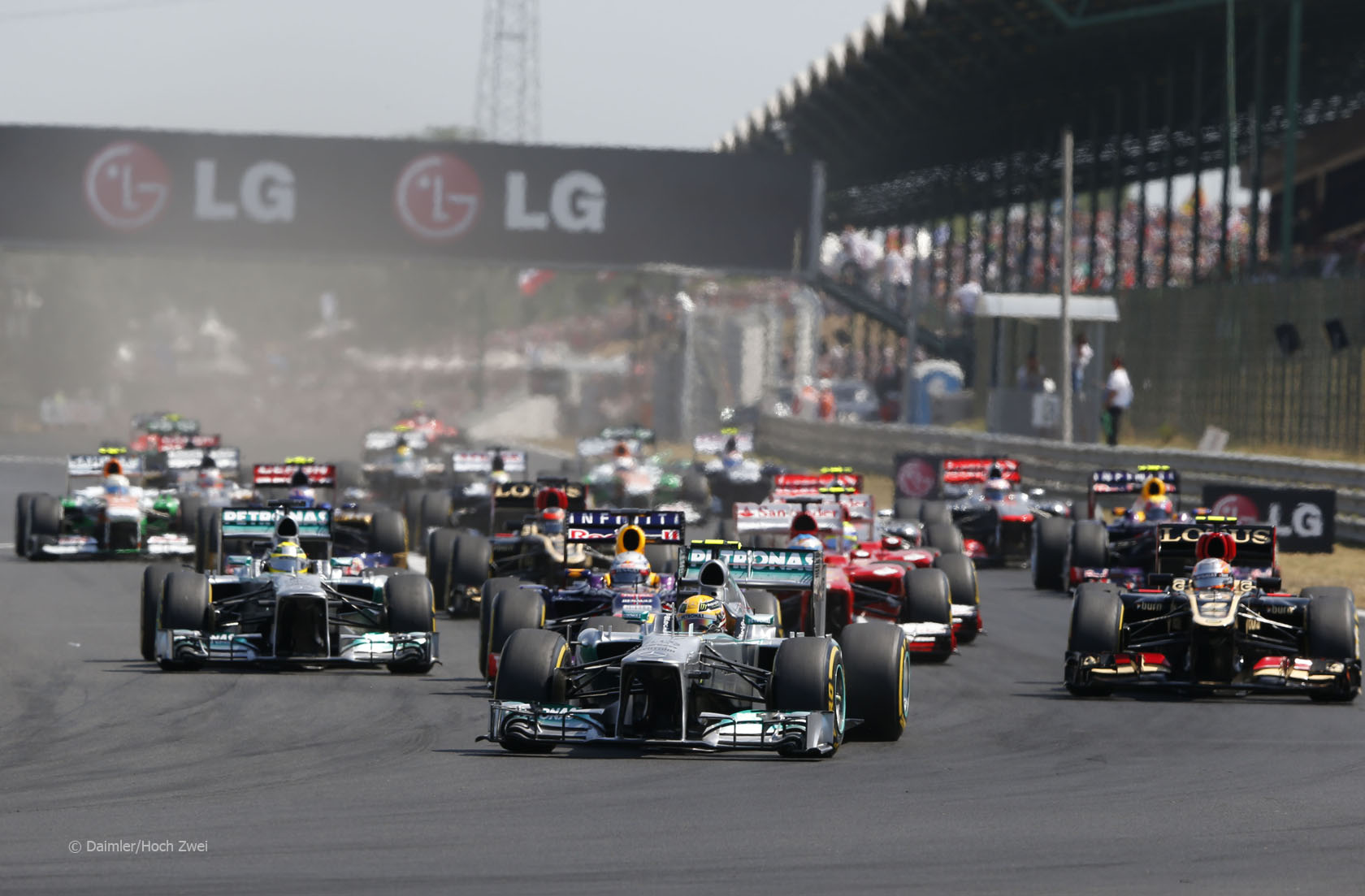 Which F1 driver was the best performer during the Hungarian Grand Prix weekend?

Sebastian Vettel – Despite being able to attack Q3 with two new sets of soft tyres, he lost out to Hamilton by a few hundredths of a second. “Maybe on the second I was losing out a bit in the middle sector and perhaps I wasn?óÔéĽÔäót aggressive enough,” he said. He jumped onto Hamilton’s tail immediately after the start but couldn’t get the sniff of a pass. That set a pattern for his race in which he lost time stuck behind Button (twice) and later Raikkonen. Despite a frustrating race he goes into the summer break having increased his points lead to 38.

Mark Webber – Qualifying was a disaster. “Mark?óÔéĽÔäós car had two issues, one with the gear shift and also with KERS, which was probably costing him up to 0.8 of a second per lap,” said team principal Christian Horner, adding he “did a very impressive job to get into Q3”. A good start and a strong first stint on medium tyres brought him back into contention. Running on softs at the end of the race he set the fastest lap. But like his team mate he was begin given “fail” radio messages, indicating a car problem, and he couldn’t catch the Raikkonen-Vettel battle for second.

Fernando Alonso – Said his car’s traction and turn-in had been improved by the latest aerodynamic modifications to the F138. But he couldn’t keep the two-stopping Raikkonen behind and ended the race a disappointed fifth. Criticised Grosjean after the race for getting in his way at the start, but the Lotus driver hadn’t done anything wrong.

Felipe Massa – A first-lap tangle with Rosberg damaged his front wing. His tyres went off sooner than his team mate’s so he was the first of the Ferraris to pit on lap 11, though they had to leave the wing as it was to save time. He was passed by both Lotuses in the next stint and was later jumped by the two-stopping Button, leaving him eighth. Jenson Button – Felt he couldn’t get the most out of the car in qualifying: “When we run fresh rubber, I can?óÔéĽÔäót get enough front-end in the car ?óÔéĽÔÇŁ we?óÔéĽÔäóre maxed out ?óÔéĽÔÇŁ so I?óÔéĽÔäóm struggling. In a way, that?óÔéĽÔäós a positive ?óÔéĽÔÇŁ because it means we?óÔéĽÔäóve introduced downforce to the rear of the car.” A brilliant start – despite using the harder medium tyres – saw him gain five places. McLaren would have preferred to run him on a three-stop strategy but were wary of dropping him into traffic. It paid off and he finished seventh.

Sergio Perez – Crashed at the end of final practice at turn 11 when the rear of the car got away from him, but the team repaired it in time for him to participate in qualifying. He rewarded them by getting into Q3, where he qualified on the medium tyres. But he couldn’t match Button’s pace on the harder compound. His tyres began to go off in his final, 31-lap stint on mediums, though by then he had no immediate threat from behind.

Kimi Raikkonen – Wasn’t as happy on the revised tyres as his team mate was: “Maybe the new tyres are a bit different ?óÔéĽÔÇŁ especially on the front ?óÔéĽÔÇŁ so it?óÔéĽÔäós been hard to find a good set-up,” he said. Starting on the dirty side of the grid he lost out to Massa, and although Lotus pitted both their cars on lap 13, Raikkonen came out behind the Ferrari again. However he passed Massa soon after, then hit a useful patch of clear air when the McLarens pitted. This allowed Lotus to make a two-stop strategy work which vaulted Raikkonen from the middle of the top ten up to second place. He kept Vettel behind in the final laps to claim his fifth runner-up spot of the year.

Romain Grosjean – His third place on the grid was briefly put in jeopardy when the stewards found his floor was flexing too much, but the team were able to show the part had been damaged on a kerb. Vettel squeezed him hard at the start but when Alonso tried to take advantage of him at turn two Grosjean showed his gives as good as he gets. But he overstepped the mark when passing Button, needlessly clouting the McLaren and earning a post-race time penalty. His drive-through penalty for passing Massa around the outside of turn four and briefly putting all four wheels off the track was unfortunate, as he’d clearly been trying to avoid exactly the sort of contact he’d had moments earlier with the McLaren. Nico Rosberg – Blamed Massa for the first-lap tangle that dropped him to 12th place, though he could have avoided the contact himself. That effectively ruined his race, though the engine failure six laps from home – his third technical failure in a race this year – cost him ninth.

Lewis Hamilton – A stunning lap in qualifying surprised even Hamilton who did not expect to get pole position: “I thought Sebastian [Vettel] had done enough,” he said afterwards. He held his lead at the start and, crucially, when he made his first pit stop he was able to quickly get past Button, drawing alongside with DRS on the main straight. With Vettel stuck behind Button, Hamilton was able to build up a lead. Later in the race he came out of the pits behind Webber but an opportunistic pass at turn three meant he lost little time. With a useful cushion over the two-stopping Raikkonen he was able to look after his tyres and secure his first victory for Mercedes.

Nico Hulkenberg – Qualified 12th but was just eight hundredths of a second slower than the eighth-placed car in a very close Q2. Started poorly, falling to 15th, but then passed Sutil. Whether it was Sauber’s upgrades or the revised tyres, Hulkenberg’s race pace was much improved. He was on course for points until a problem changing gears during his second pit stop led to him breaking the speed limit and collecting a drive-through penalty.

Esteban Gutierrez – Didn’t set a time in final practice due to an engine problem. That was rectified in qualifying, but for the sixth time he got no further than Q1. More trouble struck during the race: he retired with a gearbox fault while running 16th.

Paul di Resta – Languished in 18th in first practice but believed he had made some progress after that. So he was bemused to qualify in the same position. “Throughout all the sessions we?óÔéĽÔäóve looked more competitive on the softs,” he said, “but in Q1 they just didn?óÔéĽÔäót switch on”. He made amends with an excellent start, passing his team mate – who’d started seven places ahead of him – along with four other cars. But he didn’t have the pace to challenge for points so the team retired his car when a hydraulic problem became apparent in the final laps.

Adrian Sutil – Struggled at the start on mediums but felt the race was coming back to him when a hydraulic problem started to interfere with his upshifts and he was forced to retire. Pastor Maldonado – Finally ended Williams’ ten-race wait for a point in 2013, though he needed the misfortune of Rosberg and Hulkenberg to get it. But the Williams had the legs on the Toro Rossos and Force Indias which has seldom been the case previously this year.

Valtteri Bottas – Admitted he hadn’t been having his best race to date when a hydraulic problem ended it shortly after half-distance.

Jean-Eric Vergne – Was mystified by the gap between him and his team mate in qualifying, which had him poring over their car data afterwards. Finished ahead of Ricciardo in the race but drew little satisfaction from it: “It means nothing, especially when we are outside the points. I?óÔéĽÔäód rather finish behind him inside the points.”

Daniel Ricciardo – Got into Q3 for the third race in a row but didn’t have the pace to build on it in the race. “We struggled at [the] Nurburgring as well, so the heat has got something to do with it,” he said. Charles Pic – Ran a two-stop strategy and made short work of the two Marussias when he came out of the pits behind them at the start of his second stint. But it looks like his team mate’s three-stopper was the quicker strategy for Caterham.

Giedo van der Garde – Made a lot of changes to his car on Friday night after struggling with understeer, and judged the car to be much improved on Saturday. Said his race performance was his best so far after finishing six seconds ahead of his team mate.

Jules Bianchi – Marussia struggled dreadfully with their tyres and were well off Caterham’s pace. That consigned Bianchi to a lonely race which he finished a lap behind Pic and 43 seconds ahead of Chilton.

Max Chilton – Reasonably close to Bianchi in qualifying but struggled in the race, particularly with the balance shift between the two types of tyre. Marussia expect the next races will be better for them.

Who was the best driver of the 2013 Hungarian Grand Prix weekend?