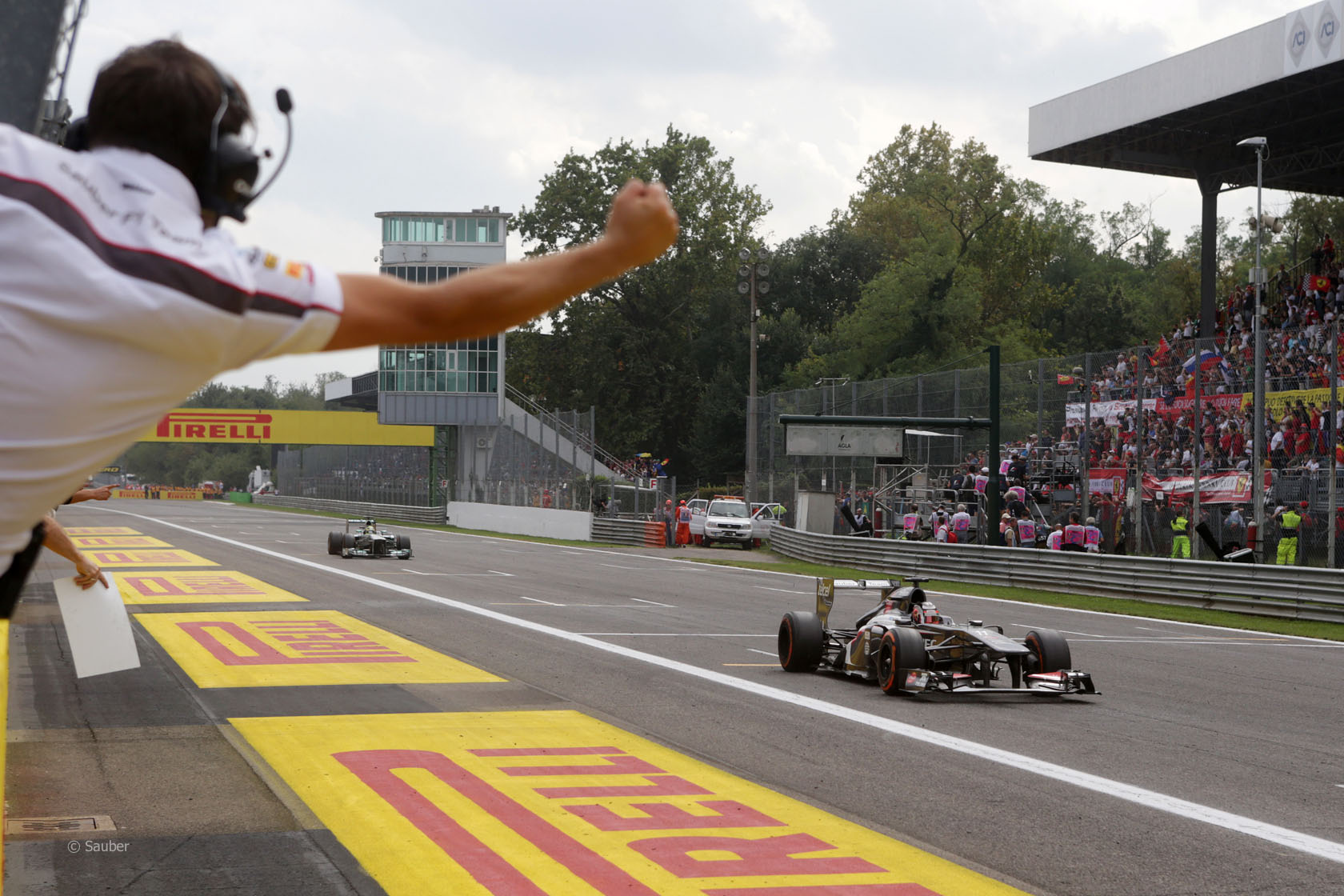 Nico Hulkenberg took nearly half of the votes to win the Driver of the Weekend poll for the Italian Grand Prix.

His shock third place in qualifying followed by a strong fifth in the race was easily the stand-out performance of the weekend.

Surprisingly this was the first time Hulkenberg has appeared in the top three this year.

Hulkenberg’s qualifying lap on Saturday was simply fantastic. He looked impressive throughout the session but really pulled out all the stops in Q3 to put his car behind only the Red Bulls.

His start and opening lap didn’t quite match this as he was demoted to fifth by the two Ferrari’s behind. He refused to drop any further however. A stern defence against Nico Rosberg earned him a well deserved fifth place just ten seconds behind race winner Vettel.

The fact he’d achieved all this in a car that’s clearly inferior to his rivals’ is what many of you picked up on and the reason many voted for Hulkenberg.

I?óÔéĽÔäóm a Vettel fan, but I voted Hulkenberg. Not that Vettel could have done any more or better, but qualifying third and finishing fifth in this year?óÔéĽÔäós Sauber is a serious feat. So for me it?óÔéĽÔäós logical he would edge it in front of Vettel.
Matthias (@mattds)

He qualified in a brilliant third only behind the Red Bulls, and finished behind Ferraris and Red Bulls. He finished one second behind Massa and ten behind Vettel. He was under pressure from Rosberg but kept his mind and didn?óÔéĽÔäót make mistakes. Well deserved vote for Hulkenburg.
the_sigman (@sigman1998)

Has to be Hulkenburg, for me. Vettel did a very good job yet again, but Hulk was incredible. That car had no business qualifying third and finishing fifth.

Vettel never put a foot wrong as he topped every single session of the weekend with the exception of first practice. He always looked to have the race in control, even when threatened with gearbox problems.

The only driver who was flawless all weekend.
Lance (@lancelot)

Vettel should be the Driver of the Weekend for the dominance since second practice and also how professionally he handled the disgruntled fans.
iAltair (@ialtair)

For Alonso, fifth place was a rare appearance inside the top half of the top ten this season, however he was still out qualified by Massa. He overcame this – and a poor start – to fight back brilliantly to second.

What more could Alonso have done?

Maybe a little more in qualifying, he would have had a shot at Vettel and that call not to come into pits went astray as the rain did not come, so two minor errors there. Otherwise a steady performance from him too and that overtake had me on the edge.
Akshay (@hamilfan)

Voting is still open for Singapore Grand Prix Driver of the Weekend – cast your vote here:

18 comments on “Hulkenberg voted Italian GP Driver of the Weekend”